Very few artists can pull off a show without all their works on exhibit.

Rashid Rana is no metaphysicist. Apart from being born in Pakistan, he had little to do with the fact that a large number of his works didn’t arrive in Mumbai in time for his double-bill art opening on 9 April. They were held up at customs. But Apposite | Opposite, his first exhibition in Mumbai in five years, still managed to stun, and then silence. The only one to speak was the artist himself. 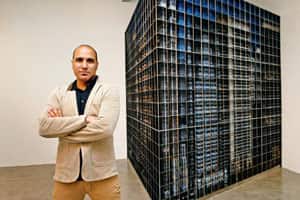 From 2002, Rana has produced complex and ambitious works that use the phenomenon of pixelation as their mode and metaphor. “Pixelation is Rana’s mode in that he builds his large prints by amassing thousands of smaller images that become ‘pixels’ in service of a bigger picture," says art historian Kavita Singh. “And pixelation is Rana’s metaphor, because through the relationship between the larger image and its constituent elements, he leads us to meditations about part and whole, surface and depth, fragment and meaning."

It was in India, in New Delhi’s Nature Morte gallery, that Rana had his first international solo in 2004. Titled Identical Views, the exhibition flagged his ascent to the poster-boy status in the Indian art gallery circuit that he wears today. The most memorable exhibits were from the Veil Series, in which the artist’s subversive intentions manifested as photo mosaics of women dressed in burqas. Upon further inspection, the work appeared to be a collage made up of thousands of pornographic stills of women downloaded from the Internet.

In the artist’s visual universe, competing worlds of pop culture, religion and politics collide and converge in mosaic-like settings to give us a new parallel entity: Rana’s world of fragmented images. Here, distance alters meaning. Here, pictures hold secrets: They lie, they confuse, they reveal.

Chemould Prescott Road, the larger gallery space, hosts the bulk of Rana’s new work. The pièce de résistance is the imposing stainless steel installation, Desperately Seeking Paradise II (2010-11). Viewed from certain angles, its vertical slats give the illusion of a smooth mirror surface. Viewed from other angles, it gives you something like New York City’s skyline. But come closer, and you’ll see the component parts of this high-rise fantasy: tiny images of apartments in Lahore. The precursor to this work, Desperately Seeking Paradise, was exhibited as part of Home Spun, an exhibition curated by Girish Shahane at art collectors Anupam and Lekha Poddar’s Devi Art Foundation in Gurgaon from August-December. That was a cuboid, suggestive of the Ka’aba, the holiest Islamic site of worship. This is a vortex, emerging from a corner of the gallery like Titanic’s bow. It achieves several things that art ostensibly sets out to do—straddling the broad spectrum between admiration, curiosity, fear and nostalgia.

Elsewhere at Chemould, the “pretty" photo mosaics of the Language Series are composed of photographs of Urdu and English signs from shops in Lahore. And in What Lies Between Flesh And Blood Series (2009), Rana presents serene canvases, reminiscent of the abstract expressionist Mark Rothko. Viewed closely, the works reveal close-ups of blood and skin.

Rana’s most recent line of work are his video mosaics, which he has been working on for three years but only now made public. In Anatomy Lessons Series 3, Michiel Jansz van Miereveld’s famous painting Anatomy Lesson of Dr. Willem van der Meer—of a naked body, dissected by a doctor and medical students—flickers on a screen. It is made up of hundreds of moving images culled from CCTV footage, films and documentaries. The seemingly provocative video mosaics of The Anatomy Lessons and The Anatomy Lessons II were made by videographing Punjabi wrestlers in a staged setting in Lahore. At first, the component videos appear pornographic. But they’re actually sliced up versions of the same video, rearranged to present the same visual landscape.

While so far, Rana has been more concerned with the juxtaposition of the micro and macro, where smaller images made up one larger image, he is now equally interested in rearranging pixels from one image to form something entirely new. “This is more challenging in a sense: I can simply rearrange images to form new meanings and new associations," he says.

Over at Chatterjee & Lal, this new concern is visualized in Pure Beauty III, where one of Gerhard Richter’s famous colour charts are rearranged to form the terrifying scene of a bomb blast. This can only be deciphered properly from a distance. The other eight works at Chatterjee & Lal all play upon this notion of distance. Here, in his series of “photo-sculptures", Rana pastes highly pixelated photographs of ubiquitous objects—a television set, a flower vase, a stack of newspapers—on to boxes.

This is what the strength of this tightly curated two-gallery exhibition lies in: this is the opposite of what is expected of the viewer in the first gallery. At Chatterjee & Lal, to make sense of the artworks, you have to move away. Come closer, and the imagery pixelates, and then totally abstracts.

As the Pakistani critic and curator, and close friend, Quddus Mirza says of Rana’s works, they exist like photographs of our imagination and videos of our dreams. “Transcending the notions of nationalism and regionalism, his art is international in its essence and vocabulary," he writes in the introduction of a monograph published by the two galleries to accompany the exhibition. He says Rana’s photo-based works are a mark of a global language, which is understood worldwide yet spoken with a particular accent.

To reiterate the basis of Rana’s artistic manifesto: we live in an increasingly visual, constantly changing, world. And this is perhaps why he is best suited to be its grammarian.

Apposite | Opposite opened on 9 April and will run till 26 May at Chemould Prescott Road and Chatterjee & Lal in Mumbai. All the works were installed on 12 April.