When it comes to his audience, director Anurag Kashyap has never felt the need to let up. To date, Kashyap has been a master of cinema vérité. His films, from Paanch to Gulal, Black Friday, and even the Indian version of March of the Penguins, which he scripted, are rooted in the often dysrhythmic realities of life. But, with his latest, No Smoking, Kashyap says he wanted to let go of his old descriptors and find a new beat. “I had to do a mainstream movie," says Kashyap. “People were getting wary of me, so it was time. And I needed a box-office hit." But Kashyap’s idea of the mainstream isn’t the sort of thing that has Bollywood hit written all over it. 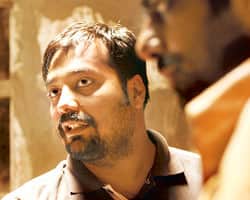 No Smoking is slick and smoothly executed, with all of it, including the occasional comic reprieves in the film, tainted by a darkness—and peppered with Kashyap’s private jokes. For instance, Ranvir Shorey, who plays a recovering smoker and K’s childhood friend, is called Abbas Tyrewala in the movie; a dig at real-life scriptwriter Abbas Tyrewala, who was originally supposed to play this character, but backed out. At one point, a character says, “Salaam Namaste, MBBS," making a reference to Tyrewala’s film credits. What is simple enough to figure out is Kashyap’s feelings for the city he lives in: Mumbai. This is not a film played out on grand sets, against hefty backdrops and blue screens. Kashyap has shot his movie out and about Bollywood’s hometown (the film was also shot in Uzbekistan, Russia and Kutch) and his camera treats her like a character it knows well: There are frumpy parts, but she is still beautiful and edgy. Dharavi, Mohammed Ali Road, Bandra, Dongri—Kashyap catches them all in muted tones of black, white and grey, and without the exuberant, deep colouring of Black Friday. “With Anurag’s earlier films, there was always some reference point to start from, because they were realistic, but with this one, we had to imagine and depict the anxiety of an addict, and that was the challenge," says production designer Wasiq Khan, who has worked with Kashyap on all his films. The only set used was the setting of the lead couple’s apartment, which was made up on the terrace of a 44th floor apartment in South Mumbai’s Worli.

Whether you like psychological thrillers or not, this movie’s more demanding of its audience than most. Question is: Who’ll be laughing at the end? Will the joke be on us, or on Anurag Kashyap?

No Smoking opened in theatres yesterday.