From Kolkata to Kaktovik

From Kolkata to Kaktovik

For most of us living in the tropics, the Arctic is a vast land of ice and water where polar bears roam. Few of us are aware that the Arctic’s diversity of animal life is incredibly rich. Every spring, millions of birds migrate here from every corner of the globe to breed. The cold, desolate Arctic has a long history of indigenous people and vast reservoirs of oil, natural gas and coal. It is not a last frontier, but the most connected land on earth. Today, however, it is at a tipping point due to climate change, toxin migration, and extraction of oil and gas.

Born in Berhampore, West Bengal, Banerjee completed a master’s in physics and computer science from New Mexico State University before joining the Los Alamos National Laboratory in New Mexico, US, as a research scientist. After spending a couple of years at Los Alamos, he took up a research position at the mathematics and computing technology division of Boeing in Seattle, Washington.

All seemed to be going right for the scientist until 2000, when he went to Churchill, Canada, to photograph polar bears. He was happy with his photography skills, but the overall experience of wildlife tourism disappointed him. He was disturbed by the way by tourist vehicles surrounded the bears and people nonchalantly clicked pictures without bothering about the environment or about the inconvenience to animals. Banerjee shot a rare photo of a bear eating a dead bear. This, even he could figure, was not normal. This documentation of ursine cannibalism changed his world and made him want to live in the wild, with the polar bears. 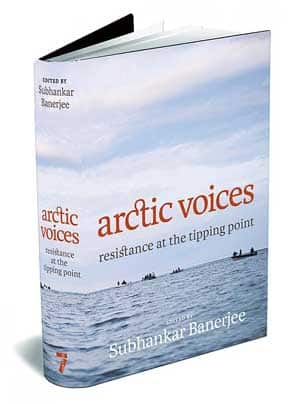 Banerjee’s science background helped him prepare for the harsh Arctic climate but the blizzards nearly knocked him out. During one such incident, while camping in the Canning river delta on the western edge of the Arctic National Wildlife Refuge, Thompson and Banerjee encountered blizzards of 60 miles per hour with temperatures around -40 degrees Fahrenheit (around -40 degrees Celsius). This brought the wind-chill down to around -110 degrees Fahrenheit (around -80 degrees Celsius) for almost all the 29 days they camped there. Banerjee has compelling stories about how difficult it was to answer nature’s call in the freezing cold. “It was all about the timing, a second’s delay would guarantee frostbite and hypothermia."

But he also saw a mother polar bear with two cubs playing outside the den, one of the most cherished moments of his life. He saw a musk ox with its newborn calf migrating over snow-covered tundra; an American dipper finding food in the open water of a creek along the Hulahula river; a few caribou digging through snow for food; moose and porcupine chomping on willow; wolves and wolverines and their tracks; and ptarmigans flocking outside his tent, with chatter that sounded like “go back, go back".

Gwich’in hunt on the Porcupine river.

Banerjee’s 14-month-long journey in the Arctic National Wildlife Refuge culminated in his first book, Seasons of Life And Land—Arctic National Wildlife Refuge (2003). But an accompanying exhibition at the Smithsonian National Museum of Natural History was censored during the George W. Bush government in 2003, resulting in major international media coverage of his work. Subsequently, the California Academy of Sciences revived the exhibition and took it around the US.

In his latest book, Arctic Voices, Banerjee writes—“I use photography to raise awareness about the Arctic, but I never would have imagined that my photographs would be used on the US Senate floor to argue against oil drilling in the Arctic National Wildlife Refuge—yet that is exactly what Senator Barbara Boxer did, which won her a crucial vote on 19 March 2003. Nor did I imagine that my exhibition at the Smithsonian Institution would be censored and become the topic of a Senate hearing at which Senator Richard Durbin would support my work, or that later a Senate investigation would follow."

The Inupiat hold a prayer after a whale hunt.

The Eveny reindeer camp was about 300 miles (around 482km) from the nearest village. It was cold, with daytime temperatures hovering around -65 degrees Fahrenheit (around -53 degrees Celsius), and they were staying in a canvas wall tent. On the first night, during dinner with their host, the young couple Gavril and Svetlana Dagileva, and the resident ecologist, talk turned to Indian films. “Mithun Chakraborty?" “Jaya Bhaduri?" “Amitabh Bachchan?"—names that Svetlana kept repeating, inquiring if he knew them, and saying she loved watching Indian films with her mother-in-law whenever she was in town. This warmed the conversation across the dinner table and perfect strangers became friends for life.

In Nelemnoye, they stayed with an elderly couple, Nikolai and Evdokya Shalugina. “I remember having at least seven meals a day, all of them fish that Evdokya prepared in many different ways, one of which tasted like the doi maach that my mom makes back in Kolkata. Films and fish connected us—Eveny, Indian, Inupiat and Yukaghir," recalls Banerjee.

Over the past decade Banerjee has become a leading international voice on issues of Arctic conservation, indigenous human rights, resource development and climate change. His work has been instrumental in securing conservation efforts for the ecologically and culturally significant areas of the American Arctic, including the Arctic National Wildlife Refuge, Teshekpuk Lake wetlands, Utukok river uplands, and the Beaufort and Chukchi seas.

“Today, I approach the Arctic simply from the experience of land as home, a place that supports communities of our species and many other species with whom we share this planet," says Banerjee.