In April, a little-known Indian dish suddenly found itself in the global haute cuisine spotlight. The simplicity of the masor tenga (a sweet and sour stew of fish and vegetables), a staple of Assamese kitchens, had won over the legendary British chef Gordon Ramsay and made it to his list of 100 favourite recipes, aired by BBC’s Channel 4 as Gordon’s Great Escape. However, if adventurous Delhiites wanted a taste of the tenga, the only option would have been to wrangle an invite from an Assamese friend or settle for a second-rate experience at the Assam stall at Dilli Haat. 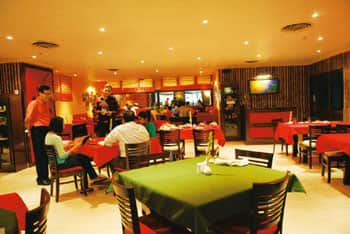 Something fishy: (above) Jakoi opened at Assam Bhavan last month; and the Parampara thali.Priyanka Parashar/Mint

Unlike the famous eateries at the other Bhavans, Jakoi is not a canteen, but a restaurant. However, the food served here is as traditional as at the no-frills Andhra or Tamil Nadu Bhavans. S.K. Bezbaruah, the managing director of Gateway Paradise (Assam) Pvt. Ltd that runs Jakoi, and his wife Paparee have designed the menu based on his mother’s recipes. The couple selected the dishes keeping in mind north Indian tastes, but there is, thankfully, no attempt to jazz up or tamper with the traditional recipes to make them suitable for different kinds of palates.

Assamese cuisine depends on subtlety rather than complexity for effect and spices are used sparingly. Even in spicy dishes, the flavours rarely overwhelm and always play second fiddle to the main ingredients—the vegetables or the meat.

With a name such as “jakoi"— the word refers to a basket-shaped bamboo device used to catch fish in shallow waters— fish, predictably, play the starring role: There are tengas, sorsoris (fish in mustard gravies), fries and curries. This section of the menu is the most extensive, with the choicest picks being the Gooseberry Fish Curry (Rs120), Til Maas (fish in sesame gravy), Sital Fry (Rs180) and Kothalguti Masor Tenga (Rs165).

The other meats that make up the non-vegetarian section are chicken, duck and pigeon. Mutton is missing, but the unusual chicken preparations (Chicken in Bamboo Hollow, Rs250, or Chicken with Bamboo Shoot, Rs270) more than make up for the absence. Then there are the pigeon and duck curries (Rs200 and Rs250, respectively), two meats rarely found on menus at Indian cuisine restaurants. The pigeon curry, a spicy, dry preparation available a la carte or as part of the Parampara thali (served in bell-metal crockery), is an acquired taste. The meat is chewy, rather unlike chicken and more like mutton in its texture.

The vegetarian section, though not as extensive, also includes quite a few options unfamiliar to the cosmopolitan palate. The fritters made of pumpkin flowers, considered a delicacy, and dried xiuli flowers, pitikas or mashed vegetables, plantain flowers cooked with chickpea and kharoli (a paste of mustard and tamarind) provide an interesting introduction to the cuisine of the Brahmaputra valley.

The Parampara thali is for Rs350, the regular non-vegetarian thali for Rs200, and the vegetarian one, Rs180.

250g rohu (or any other carp), cut into large chunks or fillets

Wash and clean the fish. Rub a little salt and turmeric into the fish and set aside.

Peel the jackfruit seeds and boil them till al dente.

Heat the oil in a pan and add sugar. Put in the marinated fish and fry for a couple of minutes on each side till golden brown. Add 500ml water and put in the boiled seeds. Add salt and turmeric, bring to a boil and simmer for 3-4 minutes.

Squeeze in the juice of one lime, put in the chillies and let it cook for a couple of minutes more.