Time has come when FIIs may choose to redeem their profits; this prospect of foreign capital outflows seems to have worried RBI governor Raghuram Rajan

Long years ago, we made a tryst with destiny by liberalizing foreign capital flows into Indian capital markets. Liberalization has delivered with both the economy and markets booming over the last two decades. However, the time has come when foreign investors may choose to redeem their profits. This prospect of foreign capital outflows from the country seems to have worried Reserve Bank of India (RBI) governor Raghuram Rajan despite the rocketing equity market that shows no signs of foreigners losing faith. Investors, however, should pay heed to the warning, given Rajan’s track record (his warnings about financial sector risk in 2005 were prescient and ignored).

Since the financial crisis in 2008, central banks of the developed countries have embarked on a radical easy-money policy experiment, which they hope will redeem their reputation, battered as it has been by the conventional easy-money policy they pursued that led to the crash. By setting interest rates at near zero and expanding their balance sheets (i.e. quantitative easing), they have yet again pushed investors to chase returns. The result has been a massive rally across asset classes with a tide of capital washing over India and other emerging markets.

How worried should you be about a reversal of foreign capital flows from the equity market? The answer lies in figuring out the impact of foreign investors on the Indian equity market and their fickleness. 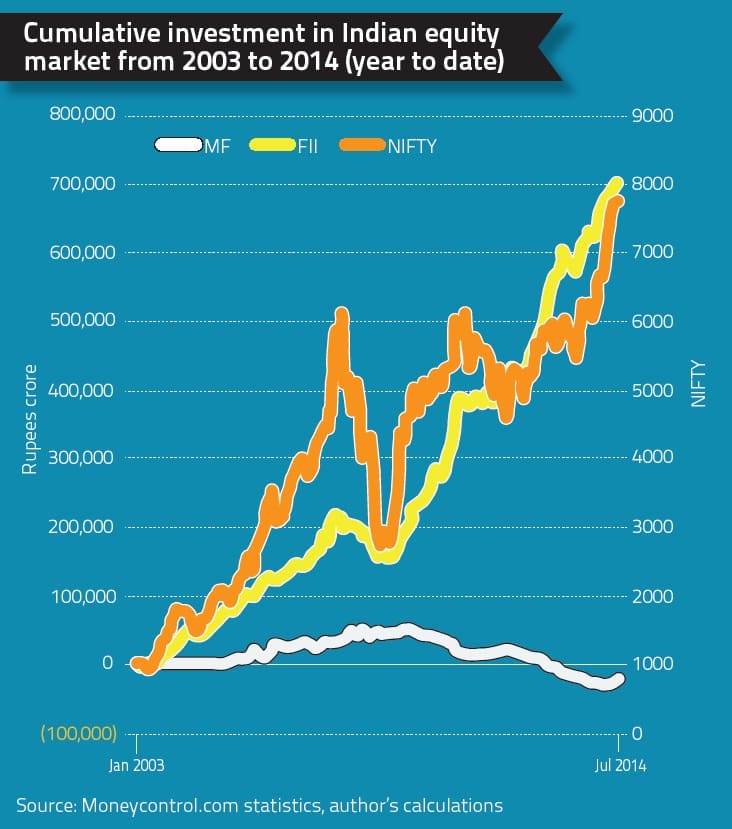 The importance of FII investment in the equity market’s rise is further underscored by the fact that cumulative FII investment since 2003 represents nearly one-fifth of the equity free float on Indian markets (based on market capitalization of ~9 million crore as per BSE retrieved on 17 August 2014 from BSE and average free float of ~40% as per Analec report of April 2012). Given that most FII investment is likely to be in more liquid large-cap stocks that comprise the Nifty and Sensex, the concentration of ownership is likely to be even higher. These high ownership levels explain the high correlation between FII investment and market moves. Foreign investors have essentially become the market dominating turnover on the bourses.

In light of this FII dominance, the RBI governor is right to worry about the impact of capital outflows. The herd-like behaviour of global capital is well known and anything that triggers a stampede out of India is likely to cause significant market drops. This is demonstrated by the fact that some of the largest falls in stocks have been in the three periods where FIIs became more circumspect in their enthusiasm for Indian stocks. The first was during the global financial crisis in 2008, the second during the acute phase of the European sovereign debt crisis in 2011, and the last was the recent hiccup following Ben Bernanke’s taper announcement (i.e. reducing QE by curtailing US Federal Reserve purchases of treasuries). However, each time the aversion was temporary and FII buying resumed in earnest.

Interestingly, in all the three instances, it was policy easing by Western central banks that reignited the enthusiasm for Indian stocks. In 2009, the return was paved by the Fed’s initiation of quantitative easing (QE1) in December 2008. In 2012 beginning, it was the European Central Bank’s (ECB) offering of three-year long-term refinancing operation (LTRO) loans in excess of €1 trillion to European banks that stopped the outflows. The 2013 ‘‘taper tantrum" was brought to a halt by the Fed’s reassurance that tapering would be gradual and guidance that rates would continue to be near zero.

So should you be concerned about a potential market fall as Western central banks step up their hawkish talk? Although there has been much talk of rate normalization, central banks have been loath to back it with action. The Fed is continuing its taper but has kept pushing back rate normalization at the same time. The Bank of England has recently reversed it hawkish tone and there are increasing market expectations of the ECB undertaking a QE. Therefore, Western policy rates are likely to remain supportive.

However, the danger lies not in normalization of rates but in a rise in global risk aversion. Easy-money policies have boosted almost all asset markets beyond fair value. Even the architects of the policy are now beginning to voice concern over frothy markets. To these stretched valuations add increasing geopolitical risk (Ukraine, Iraq, Libya, etc.) and the inability of global growth to pick up steam (e.g. lowered global growth forecast by the International Monetary Fund), and the chances of a sharp reversal are heightened. Any global risk aversion is likely to hit Indian equity markets as well given the predominance of global capital. Moreover, with FIIs being the marginal buyers, the probability of a sharp fall is reasonably high unless the post-election resurgence of domestic buying picks up substantially (since May, domestic mutual funds have invested nearly ₹ 11,000 crore compared with ₹ 42,500 crore from FIIs).

Therefore, it is best to be prepared for the squall and be cautious in the short term. Beyond global gyrations, the fundamentals for India are brighter than they have been in the recent past. A reform-minded and stable government at the centre along with a perspicacious central bank give India a good chance to ensure broad-based sustainable economic growth. This is the only way to counter the fickleness of global capital. Moreover, it will also attract increasing domestic investment that is essential for market development. If they can deliver on this promise, a dip as FIIs pull out would be an opportunity to buy for long-term investors.