‘Baracked’ (verb): to fall head over heels in love with Barack Obama, informal.

Usages: “Melissa couldn’t take her eyes off the presidential candidate during his convention speech. The girl has been seriously Baracked." 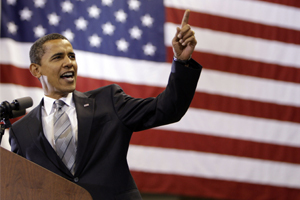 “Delhi has been Baracked thanks in large part to the persistent attention of the group Democrats Abroad India."

Yes, there are Democrats in many Indian cities. But Democrats Abroad-India was founded in Delhi in 2004 and, well, it being the Capital and all, we’re just a little more intense about our politics in Delhi.

The group organizes a ragtag bunch of expatriates, which, according to the website, are teachers, entrepreneurs, businesspeople, retirees, college students on junior-year-abroad programmes, diplomats, and Peace Corps volunteers.

I’m not going to say I’m a representative of the group — many people living abroad actually do care deeply about their country — but I will say that distance makes it much easier to sit back, talk cynically and not really worry about political activism. We can’t really go knocking door-to-door to bring out the votes for the Democrats here. The Defence Colony police would probably arrest me by the time I knock on the third house.

But over the past few months, the Democrats Abroad gang has managed to show us all up, by organizing get-out-the-vote events, throwing parties and even fund raising. And, for once, cynics such as myself can’t hide behind the excuse that our votes don’t count. 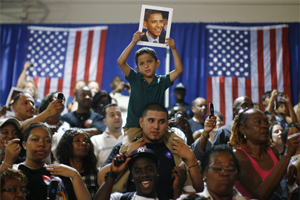 In 2000, Al Gore led in Florida until absentee ballots were counted. George Bush eventually won the state by 537 votes. And absentee ballots significantly helped the margin in the Virgina senate race, after the Macaca Controversy helped spur voters to turn against incumbent George Allen.

This election has been nothing if not close — first in the heated battle between Hillary Clinton and Obama, and now, with the surprise addition of Sarah Palin, between Obama and McCain.

The atmosphere at Democrat Abroad meetings crackled with tension and excitement at the Super-Duper Primary Tuesday at Ploof, in Lodhi Colony Market. The restaurant filled up with teachers, embassy workers, microfinance workers, and expats in orange monk robes drinking beer downstairs, and voting upstairs. After heated argument it was unanimous Obama was indeed the right candidate for the presidency.

After Obama beat Clinton, it was with a brighter enthusiasm that the group organized a huge party in honor of Obama’s Democratic National Convention speech. Red, white and blue balloons covered the door to the bar at the Jaypee Continental Hotel. People from age 10 to age 76 milled around with Obama shirts on, stickers and buttons. Margaritas and Heinekens were ordered. By 9pm, around 150 people had settled into chairs to watch a big screen showing of the speech.

It’s hard not to get in the spirit of politics with 150 people supporting you.

In the spirit of true American cosmopolitanism, a British friend dragged me into going for this event, an Australian singer opened up the night, and I sat at the back with a first generation Chinese-American making intelligent political commentary about the candidates’ physical attributes (“Michelle Obama tweezes her eyebrows way too much." “Joe Biden’s wife looks really good for her age.").

By the end of the speech, the few Clinton hold-outs (me) had soundly been Barracked. It’s easy to mock politicians and their occasional trite statements when you watch speeches alone on Youtube.com, but it’s an entirely different experience with a rowdy audience cheering, hooting, applauding and darn near dancing at every dramatic pause in the man’s speech.

Well, except for the pause following the statement about promising to stop American companies from sending jobs overseas. It seems the crowd likes their jobs overseas.

I’ll admit: I choked up a couple of times. The man’s electrifying, and looking out over a crowd of friends and strangers equally enraptured, I couldn’t help being in awe of my country’s political process. I even felt close to patriotic.

Just to cinch the last remnants of division in the Democratic Party, one of the Democrats Abroad announced as soon as the speech ended that McCain had picked his running mate. In the naïve moments of post-speech-induced ecstasy, the crowd thrilled at the seemingly desperate move McCain made in picking Sarah Palin. For a few minutes, the room was a-buzz: “This just shows how scared he is of McCain." “We’ve got the election now!" “What a pathetic move!"

But one friend from Alaska, looked shaken: “We’re in trouble. That was a smart move. A really smart move. People in Alaska love her."