Thanks for Visiting Mint
You seem to have an Ad Blocker on. Please turn it off in order to continue, or whitelist Mint
HOW TO TURN OFF AD BLOCKER
OR
REFRESH IF YOU ALREADY TURNED OFF THE AD BLOCKER
Home >Mint-lounge >Features >Lounge Review: Not Really Indian, Mumbai

A flawless meal at the first Indian outpost of chef Atul Kochhar, who led two London restaurants to their Michelin stars

Indian cuisine is finally looking up on the restaurant scene in Mumbai. With NRI (Not Really Indian), chef Atul Kochhar, who led two London restaurants to their first Michelin stars, focuses on Indian-immigrant recipes morphed with local ingredients.

The restaurant vibe is relaxed and casual, with plenty of natural light streaming in, neutral-coloured decor (lots of whites and browns) and interesting light fixtures (milk cans as sconces and such like). The staff is warm and friendly, and takes pains to explain the dishes.

We tried the Mumbai Martini ( ₹ 475), Kochhar’s signature drink from his Michelin-starred London restaurant Benares. It’s a potent combination of vodka and muddled curry leaves, with the added kick of ginger and lime juice—a refreshing start to the meal.

For starters, we tried the Dalim Shakarkandhi ( ₹ 225), a chaat preparation of earthy, roasted sweet potato with dollops of yogurt, drizzled with a sweet and tangy tamarind chutney, and garnished with pomegranate seeds and roasted moong dal, both of which gave a pleasant crunch to the dish. From the Robata (grill) menu, we ordered the Mamak Lamb Chops ( ₹ 1,350), a Malay-inspired dish with three perfectly Frenched chops, grilled with a mixture of soy, honey and lime juice. The meat was succulent, done just right.

For mains, we ordered the Bunny Chow Vegetable ( ₹ 400), a popular South African dish of scooped-out bread loaf, ladled with a curry.

Our vegetarian version comprised a hearty potato and kidney beans curry inside a soft bread bowl, garnished with a fresh salad and a fried banana chip. The bread had soaked up the curry to become moist and flavourful. We also tried the Malaca Bobra Pork ( ₹ 600), a spicy Malaysian-style pork curry with a hint of ginger and vinegar. The pork was tender and juicy. We mopped up the curry with a side of Roti Canai ( ₹ 75), an Indo-Malay flatbread similar in texture to the Kerala parotta. 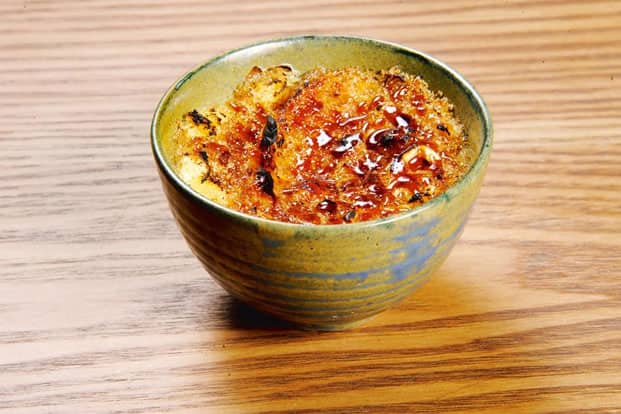 Desserts were wheeled to the table on a cart and we pointed to one that looked like an apple crumble, but was labelled Gondhoraj Tart with Tulsi ( ₹ 225). We were intrigued, but one bite confirmed that it was a case of mislabelling. We sent it back and were served the correct dish, a delightfully tart lemon curd made with the aromatic Bengali staple gondhoraj lebu, though the lemon overpowered the basil. The tart shell itself was buttery and crumbly. Our second dessert was the British Bread Pudding ( ₹ 200), probably the best we have tasted in the city. It was extremely moist with custard and not too sweet.

When the bill arrived, we realized we had not been charged for the desserts. Despite several requests, the restaurant manager insisted that the desserts were on the house because of the mix-up.

If we absolutely had to pick a flaw, the lamb chops were served with a pile of (wilted) lettuce, which was quite redundant. Service can be a tad slow, but we are putting it down to opening jitters.

Our meal—one cocktail, two each of starters, mains and desserts, and a side of roti—cost us ₹ 3,661, all inclusive (we were not billed for the desserts).