The next best things

The next best things The colour on the Chenin Blanc is a nice light colour. It looks like a Chenin Blanc should look. There isn’t a strong nose, but that’s much better than an offensive scent. And there is not a very bad aftertaste. It’s pretty neutral, which is actually a good thing for Indian wine. The Sula Chenin Blanc is better—with more balance and more character—but it’s probably the only Indian brand that scores higher than this. As for the red, I’m surprised because this one smells okay. On the whole, it’s an acceptable red. Nothing that really stands out, but again, that’s a good thing. The Grover La Reserva is definitely better, but this one isn’t so bad.

The cork is sunken in on the white, which is not a good thing. The name Zampa is not exactly something that grabs you, or comes across as particularly Indian. It sounds like something more from central Africa. The back labels on both are all over the place. It recommends you have the red wine with red meat. Red meat how? Like on the cow still? Or cooked in a curry? That says nothing. That isn’t a tasting note; it’s just taking up space.The nose on the white has something banana-y on it, which is not my favourite note for a Chenin Blanc. There is something medicinal, chemical, almost like an overripe banana, to it. It doesn’t smell anything like Chenin Blancs from South Africa or the Loire Valley. Those wines may have different tastes from one another, but there is a commonality to them that makes them distinctly Chenin Blancs. If this were a blind taste test, I would not identify this wine as a Chenin Blanc. The red wine has the distinctive Nashik-y aftertaste, which many of the wines from the area have. It’s almost as if the wine were made in large plastic barrels and that plastic taste has remained. And the tannins are not totally formed, so they coat the mouth.

Basically, this is the kind of wine I would be willing to drink at a banquet, with loud music in the background. It’ll go on fine with that. You sip it and you won’t make an awful face. The Zampa Syrah is available for Rs600 a bottle and the Zampa Chenin Blanc sells for Rs570. Melissa A. Bell

Meze, the new alfresco restaurant at MGF Metropolitan Mall, Saket, is the second restaurant to open in the Manre complex. The third, Maza, another terrace space, is scheduled to open later this week with a Sunday brunch. While Manre serves modern European fusion cuisine and is a formal sit-down dining area, Meze serves a selection of West Asian appetizers and grills and has a casual feel to it accentuated by the white cabana bar in the centre.

Both sides of this terrace restaurant are lined with cabanas which are comfortable and tastefully done. You have the option of securing a tent for a private party of 10 or can sit in the larger cabana where four-five smaller groups can be seated comfortably. We ordered the Meze non-vegetarian platter and falafel (chickpea croquettes) from the appetizers section and grilled fish from the main course. At Rs650, the platter is an economical choice because it allowed us to taste four cold appetizers—Hummus, Tabbouleh (a parsley salad with tomato, onion, mint), Mouhtabel (grilled aubergine puree) and Mouhammara (a spicy dip)—with pita bread. It also included three hot appetizers (Lamb Muska, Shish Taouk and Kibeeah) which were served in pairs, making this platter just about enough for two people. The falafel was liberally coated with sesame seeds that gave it a crunchy taste. For us, the star of the evening was the Baklava. Two pieces of this pastry, filled with assorted nuts, were served warm with a drizzle of honey and were a fitting finale to meal. 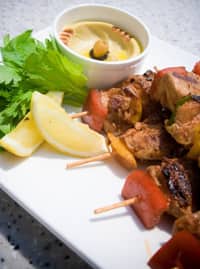 We were served our two starters and one main course at one go. By the time we got around to tasting the Samak Meshvi (charcoal grilled fish), it had almost become a block of ice. Since Meze is an outdoor restaurant and it is winter, the staff should check with guests how they would like their order to be served. Now I am not an expert on Shish Taouk—the Lebanese version of chicken tikka—but recipes Googled seemed to indicate that the chicken should be marinated for at least 24 hours before it is grilled. However, what we tasted seemed like it had been dipped in the marinade (which had way too much saffron) and dumped on the grill.

A meal for two with dessert, one glass of beer and one cocktail cost Rs3,024. The restaurant is not open for lunch yet and it is best to reserve a table, especially on weekend nights. Call 011-40668888