Dial-a-Book is a Delhi-based start-up founded by brothers Mayank and Tarang Dhingra. Tarang, 25, is a final-year student at the University of Delhi. Mayank, 27, is a software engineer who left a corporate job at Fidelity International in 2005 to work for a string of tech start-ups—from SlideShare, an online presentation hosting service, to MPower Mobile, which works with mobile payments. In 2008, before the Twitter bandwagon bulldozed its way across the country’s Internet landscape, he experimented with creating a Twitter-like service for India called Kwippy—which Mayank called a “conversational platform". The site folded in mid-2009, and subsequent dabbling in ideas on what to do next led to Dial-a-Book. 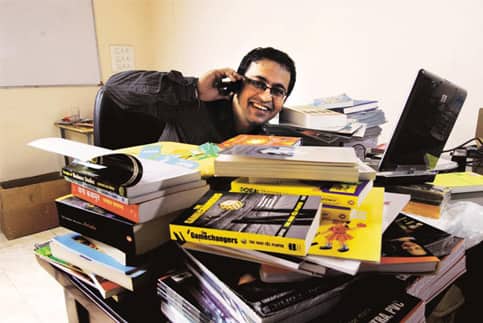 “We were trying to make ordering books as simple as ordering burgers or pizza," says Mayank, of the initial idea. “Most of us are not very comfortable with e-commerce, and giving out our credit card information online." His solution was to combine cash on delivery with fast, personalized service—delivering books ordered through the phone within 48 hours. He conducted a “brief, unscientific" survey on Twitter, where he has around 1,381 followers, to find out if there could be a market for this. “I found out that people who buy books value convenience, and not just price—and what could be more convenient than a simple phone call or SMS?"

Mayank started a trial run for Dial-a-Book on 25 September 2009. He purchased a SIM card for the phone number, set up the website, and began to promote it through social networking services. He sent emails to close friends, set up an active Twitter feed and advertised the service on Facebook. Concurrently, he and Tarang scoured Delhi—from the narrow lanes of Daryaganj to Nai Sarak—for book suppliers and wholesalers, building up a network of around 50-60 vendors and agents. 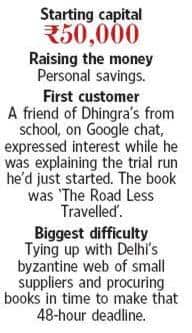 As the first orders began to trickle in, mostly from friends and family, Mayank put the basic modus operandi in place. The customer would send an SMS or call in with his requirements. Mayank would send a confirmation, then find out how soon he could get the book from his supplier network. He’d SMS the estimated delivery time. Once this was confirmed, one of Dial-a-Book’s delivery staff (the company currently has five employees, including the two founders) would set off. Mayank still makes about 30% of the deliveries himself, and tries to keep the operation as lean as possible. “I’m averse to the idea of funding by venture capital funds," he says. “We wanted to be profitable as soon as possible—and we managed that in the first month itself."

Dial-a-Book began to deliver about five books a week in its first month, with volumes growing slowly. This became an early concern, as suppliers were iffy about dealing with small-order quantities. “We don’t stock too many books, so we had to build up volumes to avoid any supplier bottlenecks," Mayank says. Dial-a-Book’s order volumes are now about 100 books a month, which Mayank calls “comfortable". They’ve also started accepting orders outside Delhi, and tied up with courier services, but the Capital still accounts for 70% of their orders.

More than 20% of their orders come from Twitter and Facebook, so Mayank keeps a constant watch on the company’s online presence. “We get all sorts of requests, from eclectic music books to 18th century manuscripts," he says. One early customer wanted a copy of Antony Beevor’s Stalingrad, which Mayank was unable to source from local suppliers. He got it shipped, by “sheer luck", from a friend holidaying in Belgium who spotted it in a local book store.

If Dial-a-Book isn’t viable in two years (“Unlikely. We’re already viable!"), Mayank says he’ll go back to a 9-5 job for a while, which will give him the security to hatch further cunning plans. “I’d make a different kind of Web product—maybe something in the realm of social commerce, or Facebook-assisted shopping, you know?"

“Customer service is our mantra. Our post-sales support is really strong, and we’re trying to be as responsive as fast as we can," Mayank says. He offers gift-wrapping services and discounts, and hopes to conduct frequent meet-ups and book-related events. “Anyone can sell books, but we discuss books."