The Buddhas may be gone forever, but the valley remains a treasure trove of history and heritage in a strife-torn country

Bamiyan valley, which sits in the lap of the towering Hindu Kush mountains, about 180km north-west of Kabul, is among the most breathtakingly beautiful areas in Afghanistan. It is also considered one of the most peaceful regions in the war-ridden country. Its history dates back more than 2,000 years, and its archaeological heritage is a confluence of Persian, Turkish, Greek and Chinese cultures.

In 2003, Unesco listed the “cultural landscape and archaeological remains of the Bamiyan valley" on its World Heritage List and the List of World Heritage in Danger, two years after the Taliban had blown up the sixth century Buddha sculptures that were Bamiyan’s biggest attraction. And in June, it was officially declared the first ever “Saarc capital of culture", for the year 2015-16—Saarc stands for South Asian Association for Regional Cooperation. A series of cultural and sports events have been planned throughout the year; all the Saarc countries are taking part.

I travelled to Bamiyan at the invitation of the provincial government, to join the celebrations following the announcement of its new-found status. There are two roads one can take from Kabul; both are fraught with danger. One goes through the Taliban-infested Ghorband valley in the central Parwan province, considered an insurgency corridor owing to the heavy presence of militia groups. The other road passes through the Maidan Shahr district of Wardak province, crosses the 3,700m high Hajigak Pass, heading across the Koh-i-Baba mountains, and descending into the Bamiyan valley.

A 10km stretch of Maidan Shahr is considered a Taliban stronghold, and the roads have been damaged by landmines. Being kidnapped is a possibility, as is being blown up by freshly planted mines. But it is the quicker route, and also the more scenic, so I take it.

I am a khariji here, a foreigner, and have to don Afghan garb for my safety. And stay silent. I do as told and settle in. Soon enough, all thought of danger dissipates as our ride winds through the landscape, hugging towering mountains and past lush fields, scattered villages and rolling farmland. It has been raining, which makes everything that much more beautiful. We stop for chai in Maidan Shahr and in Jalrez, the former district predominantly Sunni Pashtun and the latter Shiite Hazara, but both equally warm and helpful to visitors. 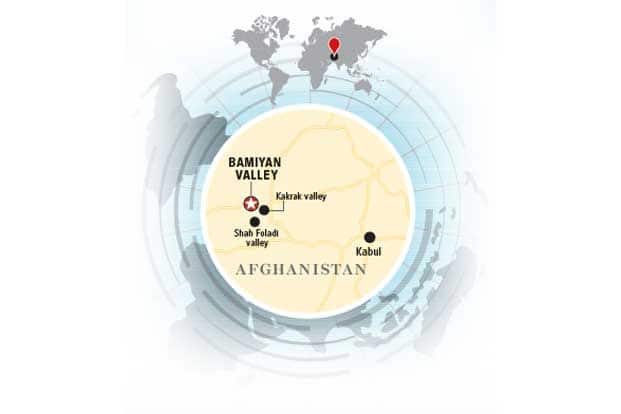 Local Muslims tell me stories about how—before the Taliban, before even the Soviet invasion—they used to routinely host foreigners, mostly Buddhist pilgrims, from across the world. Monasteries and mosques in the valley, an elderly man tells me, represented a cultural diversity and religious tolerance that had no parallel anywhere in the world.

In a bid to woo tourists and promote Bamiyan’s cultural heritage, Unesco and the Afghan government recently teamed up to establish the Bamiyan Cultural Centre, near the Buddha niches. The centre will house ancient artefacts, including the Buddha sculptures discovered by archaeologists over the years.

Band-e-Amir was declared Afghanistan’s first national park in 2009. Nizamuddin, a local resident and self-proclaimed Bollywood buff, who goes by one name, informs me that some of the scenes in the 1975 Bollywood film Dharmatma, starring Feroz Khan and Hema Malini, were shot at Band-e-Amir.

Just a 20-minute leisurely walk away from Bamiyan valley is Shahr-e-Gholghola (the city of screams), which was conquered by the Mongol troops of Genghis Khan in 1221. The Shahr-e-Gholghola fort offers a panoramic view of the valley, right up to Kakrak valley in the east. The 2 hours I spend there, sitting and watching the breathtaking landscape as a cool breeze blows gently, feel like years of meditation. I feel rejuvenated.

The Kakrak valley is one of the three most sacred sites for Buddhists in the region, after the Bamiyan and Shah Foladi valleys. More than 100 caves and niches are cut into the surrounding cliffs. In 2001, when the standing Buddhas were destroyed by the Taliban, a sitting Buddha in the Kakrak valley too was wiped out, though this did not make the headlines. You can still feel the spirit of the Buddha resonate in the valleys.

Almost 9km from the Bamiyan valley is the ancient city of Shahr-e-Zohak, named after a legendary character in Persian poet Ferdowsi’s epic poem Shahnameh. The imposing fortress of Shahr-e-Zohak, at the confluence of the Bamiyan and Kalu rivers, dates back to the sixth century. It provides a spectacular view of the nearby Hajigak valley, which contains the largest iron-ore deposits in Afghanistan.

People in Bamiyan are deeply conservative, but the radical ideology of the Taliban has no takers here. Unlike other central provinces, Taliban insurgents have failed to gain a foothold in this province.

A trip to Bamiyan is incomplete without a visit to the Shah Foladi valley, known for its towering peaks—particularly the 5,050m-high Shah Foladi peak—glaciers, flora and fauna. The peak was recently declared a “protected area" by the National Environmental Protection Agency of Afghanistan.

On my last day in Bamiyan, I spend the afternoon at a kebab shop in the main market of Bamiyan. The shopkeeper, a friendly man, speaks about his insufficient earnings and three unemployed sons. We discuss Bollywood, cricket and Isis (Islamic State of Iraq and Syria).

Isis, he tells me, wants to turn Afghanistan into another Iraq or Syria. “But they will not succeed here," he says. “We are famous for mehman-nawazi (hospitality), but we also know how to kick out unwanted guests."

Bamiyan has immense potential for tourism, and efforts are being made to project it as a world-class destination. As the authorities move to protect and conserve heritage sites, new hotels and markets are coming up. If the security situation improves, especially along the highway, all routes will lead to Bamiyan in the next few years.

Kabul is connected by flights to Indian metros via Delhi. Bamiyan is a 180km drive from the Afghan capital. Detailed route options are available at Cultbamyan.af/how-to-get-there.

There are plenty of kebab shops around Band-e-Amir; the restaurant at Naseeb Hotel is also a good place to get a meal.

The security situation in Afghanistan continues to be volatile. Most recently, on 7 August, three suicide bombings rocked Kabul, killing at least 42 people and injuring 313. This was followed by another car bomb attack at Kabul airport on 10 August that left at least seven civilians dead and 18 injured.

The alarming escalation in militant violence makes travelling to Afghanistan dangerous. However, Bamiyan itself is relatively safe. If you decide to visit, abide by the rules and recommendations of the local tour operators.

Zafar Mehdi is the editor of Afghan Zariza, the first news and current affairs magazine from Afghanistan. He lives in Kabul.