Above art collector Anupam Poddar’s bed, hangs a Tyeb Mehta painting. It is perhaps the only sedate, if beautiful, objet d’art in his home. Opposite the bed, occupying half the bedroom floor, is a low-slung Sakshi Gupta metal sculpture that rises up and down, as if the earth were breathing. In the centre of Poddar’s spacious dressing room is an elongated, mechanical penis that moves forward and backward—a whimsical work by Sudarshan Shetty, whose hammers and moving tables have taken over the living room. Across his long dining table is a sculpture made of human bones by Anita Dube.

The walls of Poddar’s study are plastered with red plates by Pakistani artist Rashid Rana, all depicting rotting meat. Poddar says that they look like landscapes or nudes. I hate them. The other painting in the room—Vivan Sundaram’s ode to Bhupen Khakhar—is much nicer. But nice really is not what Poddar is about. He collects edgy, risky, offbeat pieces by artists whom the world will hear a lot about. 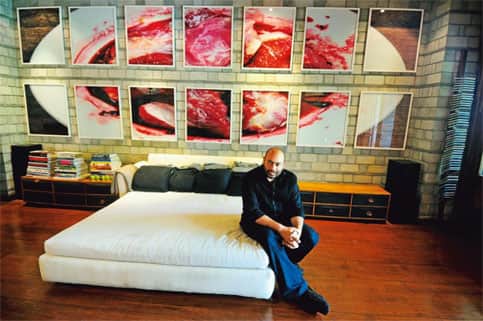 Poddar, who is industrialist G.P. Birla’s maternal grandson, changes the art in his home once every year, or two. What I am seeing is a small portion of his vast contemporary art collection, much of which is in storage or travelling with exhibitions.

Poddar, 37, is arguably Indian contemporary art’s most important collector and I am here at his home to figure out what his game is. Is he a hard-nosed businessman, a market maker or a romantic who likes contemporary art and has the wealth to indulge in it? The easy answer would be to say that he is all of the above, which he is. But what is his fundamental impulse—that’s what I am after.

Delhi collectors will tell you that Poddar is a market maker. “Anupam Poddar will buy works he loves, but he will make sure the artists in his stable are rising stars. No, scratch that. He will make their stars rise," says one Delhi art maven, suggesting Machiavellian manipulation. Many of the young designers and artists Poddar and his mother discovered are now marquee names in the art and design world. Is that a coincidence or is it because the Poddars ensured that their protégés would succeed?

I ask Poddar if he thinks there is manipulation in the Indian art market, where a small group of influential collectors buy a work and bid it up at auctions so that the value of their collections increases. “Absolutely," he says. “But it’s the same all over the world. Art is not regulated; pricing is ambiguous. A lot of it has to do with perception—whether it is created; whether it is false; whether it is built up, almost like a brand."

Art isn’t a brand, but today’s art world has started treating it as such. Yet, there is a fundamental discomfort about this collision of the artistic and commercial worlds. This is the reason I would even ask the question: Is Anupam Poddar for real or is he is a fake? Had Poddar been a Mittal, you’d expect him to buy a portfolio or company that will triple in value; you’d expect him to have only commercial interests at heart. Art is different. Underneath all the crap and the hype, underneath the publicity machines and the gallery openings, underneath the rigged auctions and the rabid collectors, art is pure, noble even. It is the human species’ most ancient and necessary impulse. Witness the Ajanta and Ellora cave paintings or the pre-Columbian sculptures. Hordes of cave people beautifying their dwellings for no other reason save to express themselves. Art springs from this romantic world view. Sudarshan Shetty’s The Party is Elsewhere is part of the collection at Poddar’s Gurgaon farm.

The stocky, bearded man with a self-designed shirt standing in front of me seems real enough. He seems to have a real connect with his works and the artists. He tells me stories about them: why Dube used human bones, for instance. Even though I ask him the same question many different ways, Poddar maintains that art is not an “investment" for him. “Nothing here is easily collectible," he says, waving at the banging, clanging, moving Shetty “circus" around him.

Poddar has expanded his horizons. In the guest bedroom is burqa art; works by Iranian artist Sarah Rahbar; and Kirti Arora’s photographs of female soldiers. There are small works by Sreshta Premnath, Ayaz Jokhio, Zarina Hashmi and Baptist Coelho, all of which, he hopes, will end up in an Asian art collection that he is accumulating. “I’ve spent the last decade and a half of my life being broke because I’ve spent all my money on art," he says. Well, depends on what your definition of broke is.

Poddar has slowed down now. He has become cautious. He now views work in the context of whether it will fit into the Devi Art Foundation that he has founded. After a couple of hours, I’ve figured out his game; or so I think. It isn’t money; it is the oldest human instinct: legacy. Anupam Poddar collects art not to multiply his wealth, although that is a collateral benefit. He sees it as a springboard to the eternal. He is, in that sense, an Asian Saatchi.

Here is a clue to what Poddar might do in the future. Last year, Charles Saatchi donated much of his collection to the British public.

Shoba Narayan likes Alwar Balasubramaniam’s camphor sculpture and Mithu Sen’s Love Letter project, because they are ephemeral rather than eternal. Write to her at thegoodlife@livemint.com