‘I stopped counting after 23’

At 38, Leander Paes knew he had to do something special to win the Australian Open 2012 doubles title, which had eluded him in a career spanning around 20 years. So he teamed up with Radek Štepánek, 33, of the Czech Republic, ranked 31 in singles.

Prior to the Australian Open, they had played just three tournaments together. After gruelling doubles-only training sessions over the 21 days leading up to the final, Paes and Štepánek practised at Melbourne Park just hours before their final in the dark. The organizers had switched off the light ahead of the women’s singles final, to be played before the men’s doubles. 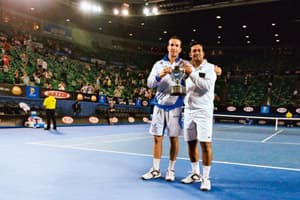 The last one: Leander Paes (right) and Radek Štepánek with the Australian Open trophy they won in January. Photo by Darren Whiteside/ Reuters.

Paes and Štepánek beat the top seeds and five-time Australian Open champions, Bob and Mike Bryan of the US, in the final on 28 January. The unseeded pair became the first team in the Open era to defeat the top 3 seeds at the Australian Open, having beaten No. 3 Michaël Llodra and Nenad Zimonjic in the third round and No. 2 Max Mirnyi and Daniel Nestor in the semi-finals. Paes also became the first Indian to win a career Grand Slam (all four in a career), having already won the French Open (1999, 2001 and 2009), Wimbledon (1999) and the US Open (2006, 2009).

Does Štepánek score in Paes’ books as an ideal doubles partner? “Yes. He is a student of life and a good human being," he says of the two qualities he looks for in a partner. “I made him practise hard. Now if the person is not keen to learn, he will tell you to bugger off because he will believe he is good enough."

He says an ideal doubles team now should consist of one high-ranked singles player and one specialist doubles player. That’s where Štepánek came in at the Australian Open. The world No. 9 in singles, Janko Tipsarevic of Serbia, was Paes’ partner at the Chennai Open in January, which they won.

By some accounts, Paes has partnered with 87 players over his career, but he laughs off the suggestion, saying he and his publicist are still counting. “At last count we were at 37."

Since Paes and his long-time on-off partner Bhupathi called it quits late last year, just a year after they reunited after 10 years, he might pair up with Devvarman. Bhupathi and Bopanna have said they would prefer playing together.

Winning a medal in doubles to add to the bronze medal in singles that he won at the Atlanta Olympics in 1996 is Paes’ top priority this year. He is also one win away from completing a career Grand Slam in mixed doubles; he’ll complete the package if he wins the French Open in Paris in May. So what keeps him going after all these years?

“Three years ago, I felt a little jaded. Traveling takes its toll on a professional tennis player and it’s a lonely life," says Paes. In 2003, soon after winning the mixed doubles at Wimbledon with Martina Navratilova, he was admitted to a hospital in the US for a suspected brain tumour. “It turned out to be a non-cancerous lesion, but you persevere through all of that alone," admits Paes.

It was at this time that he appointed American Rick Leach, a former No. 1 doubles tennis player, as his coach. In the late 1990s, Paes and Bhupathi had played against Leach in the doubles many times on the tour. “He has been my friend for 19 years; he told me then that I had a few more years left in my bag. He motivated me to carry on. After I won the Australian Open last month, he thinks I can go on till 45; I think he’s nuts," says Paes, adding that he stopped counting his age after his 23rd birthday.

Paes won his first Grand Slam title at the French Open with Bhupathi in 1999, the year they reached the finals of all four Grand Slams, winning Wimbledon as well. He has since accumulated 13 Grand Slam titles—seven doubles and six mixed doubles. He has finished working on a graphic novel, which is awaiting release, and is currently acting in a Hindi film, Rajdhani Express.

“I have always been driven more when I play for India than for myself," he says, when asked if sportspeople deserve the Bharat Ratna. Whichever field it may be, business, politics, sports, acting or the corporate world, if someone is promoting the country, they deserve the award. “That is my interpretation," he adds.