Put your ears to the page

Put your ears to the page

In the month that The Artist, a silent movie produced in black and white, is up for a Best Picture nomination at the 84th Academy Awards (on 26 February)—along with nine nominations in other categories—there is an inquiry, closer home, into the history of the moving image.

Set in 1920s Hollywood, when silent cinema fell out of fashion to be replaced by the talkies, The Artist follows the rise and fall of a star from the silent movie era, George Valentine, played by the French actor Jean Dujardin.

The Speech Writer, an interactive book project by Karachi-born artist Bani Abidi, is a reminder of the origins of the moving image too, and what lies at its core—the flip book. 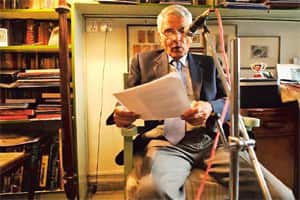 Breaking the silence: Two stills (below) from a flip book in Bani Abidi’s The Speech Writer showing Jasbir Malik in the role of the speech writer.

With The Speech Writer, Abidi takes on a new idiom: the artist’s book. The project has been commissioned and published by Raking Leaves (www.rakingleaves.org), curator-publisher Sharmini Pereira’s independent publishing house for contemporary artists’ books based in London.

The Speech Writer is a set of 10 numbered flip books. When flicked, they show two film sequences that can be viewed in parallel. The narrative is a fictional documentary about the quotidian life of a retired political speech writer, played by thespian Jasbir Malik. Surrounded by the memories of his family and his vast collection of speeches, he has retired from a lifetime of public service work. Now, his connection with the outside world takes the form of a daily broadcast from the comfort of his home.

The flip books, which were created with stills from a video that Abidi directed, show us how Malik goes about his peculiar daily ritual: picking out a suit, setting up his chair, leafing through old files, arranging his microphone, and finally, speaking into it. It is only by the eighth flip book that you learn where the megaphones connected to his microphone are set up. And this is only just before you see Malik slipping into his other supposed daily ritual—an elaborate high tea. It is a peek, a flitting glimpse—rather literally—into the life and times of the eccentric speech writer.

The book is excellently produced, as are Raking Leaves’ five other books (Pereira, who has funding from the Arts Council England, sticks to two books a year). The Speech Writer, Pereira says, evolved slowly, over many Skype conversations between her, Abidi and the book’s designer, Astrid Stavro, who is based in the Canary Islands. With over 13 years of experience as a curator, Pereira founded Raking Leaves three years ago to reinvent the ways in which contemporary art can be presented to audiences. It is a curatorial project, she insists, and not a publishing initiative. And the books she’s published so far have all had an “inevitability about them as an artist book". The Speech Writer has predecessors in books by veteran Indian artists such as Gulam Mohammed Sheikh and Nalini Malani, and more recently, photographer Dayanita Singh. The history of the artist book, though, goes back almost two centuries, when the visionary artist and poet William Blake started working on book projects in the late 18th century.

Abidi confesses to being frustrated with the prohibitive nature of contemporary art. “The only way people can see my art is by owning it. This way, it can be distributed...it can be on a bookshelf," she says.

The Speech Writer isn’t a deviant side project but a progression in Abidi’s art practice. As someone who’s been pushing the medium of video through her works—which are usually centred around one person or activity—this continues in the same vein while also taking an elegant leap in the way in which her format works at odds with her content. On the cover of the book, in the text accompanying the last counter, the speech writer says: “These are some of my best pieces. They were never used. I was told that they spoke of more than was needed." On film, this would have been poignant. A silent rendition makes it even more powerful. Here, we witness the lingering pathos of a man of words, whose muteness fills up the viewer’s ears.

The Speech Writer is available in CMYK bookstores (Delhi, Pune) and on www.rolibooks.com