Landour, Uttarakhand | Writer on the hill

In and around Ruskin Bond's house, the hills, cottages, people, and perhaps even ghosts from his books seem to come alive

“Who goes there?" he calls out.

I’ve just climbed a steep, narrow staircase to the first floor of a cottage and rung the bell. Beyond the French doors, an inner door opens, and a pleasant-faced, elderly gentleman comes out.

I stare, open-mouthed. It is him, in the flesh.

Very early on, I decided I would meet him someday, mainly because he could be met—all my other favourite authors at the time being dead (Enid Blyton) or dying (James Herriot). I finally did meet him a decade ago when he was in Bangalore for a book promotion. I remember gushing and posing for photographs. I had laughed when he told a little girl who was buying a book of his ghost stories: “Sure you want to buy that? Even I get scared if I read those!" Even after I had spent at least half an hour with him and reminisced about the books I had read by him, the meeting had still felt incomplete. I realized I wanted to see him in his “natural habitat", the world that has held me in thrall for so long.

It was like wishing to see Malgudi, or Middle-earth—places I’ve lost myself in over the years. The one difference was that Mussoorie and Landour really exist—and they were only a couple of thousand kilometres away. I could actually go there.

When I planned this trip, a friend suggested that I stay at Doma’s Inn in Landour. “You’ll love it," she said. “It’s a part of Ivy Cottage, in the same building as Ruskin Bond’s home."

I’ve always imagined Ivy Cottage as a stand-alone structure on the slope of a green mountain, with ivy growing on its walls, and a porch where I would drink tea with Bond. The fact that the inn is a part of Ivy Cottage blurs the image in my head a little. I can’t wait to see what it is really like.

Landour is a cantonment town at an altitude of 7,000ft. Though only 1,000ft above Mussoorie, and just 5km away by road, it is still untouched by Mussoorie’s tourist hullabaloo, probably because there is nothing to “do" here, as people insisted on telling us when they heard we were going to Landour.

As my husband, daughter and I drive up the hill from Mussoorie one April day, the strip of grey tarmac around the hill narrows, and the surroundings become greener as we approach Ivy Cottage.

Ivy Cottage is a large building set into a hill, bound on either side by two roads—one is a gently sloping motorable road that leads further up the hill, and the second is a walkable short cut to the top.

The front part of Ivy Cottage is taken up by Doma’s Inn, the façade of which is covered with colourful, traditional Tibetan thangka paintings depicting Buddhist scenes. Behind the rooms that make up Doma’s Inn are other residences, with entrances accessible from the side of the building. I gather from the inn’s manager that one of these residences belongs to Bond.

Unlike its façade, the rest of Ivy Cottage has white walls and brown windows. And no, it has no ivy growing on its walls, much to my disappointment. There is no porch that I can see. Nor do any of the residences at the back of the cottage look like possible candidates for the house of a world-renowned author.

The Ivy Cottage with D-shaped windows on the upper floor. Photo: Shruthi Rao

It is past noon. I know from his essays that his afternoon siesta is sacred to him. I don’t go ringing his doorbell at once—I don’t want to risk a mention in his next essay as the rude woman from Bangalore who woke him up in the middle of his afternoon nap. I decide to wait until evening.

With an afternoon to spend, we decide to climb the hill towards Chaar Dukaan and the Landour Language School. It’s like climbing a slide from the bottom up, only this is a few hundred feet in height. I huff and puff. My calves scream. The slopes of the hill we’re on are full of deodars. Bond had written of them in Notes From A Small Room—“Having lived with deodars (divine trees), I can understand God having a favourite among trees."

Lunch is a Mediterranean mezze platter and naanzas (pizza on a naan bread) at Rokeby, a British stone bungalow, that has been converted into a hotel and café. We then walk the Landour Chakkar—a path that goes around the entire mountain ridge in a loop. The paths burrow through a forest of deodars, pine, oak, maple, horse chestnut, and rhododendrons in bloom. The air is crisp, cool, and pine-scented. Elusive sunbirds hop about, and the silence is punctuated by bird calls I don’t recognize. I strain my ears to hear the song of Bond’s favourite songster, the Himalayan Whistling Thrush. Do I hear the bird’s song, meandering all about the musical scale, and dropping off midway as if it has forgotten the tune? Or is it just the echoes in my mind of the song of its cousin, the Malabar Whistling Thrush? I’m not sure, and it fills me with a deep sense of longing. I will the thrush to sing, but silence fills the air around me. 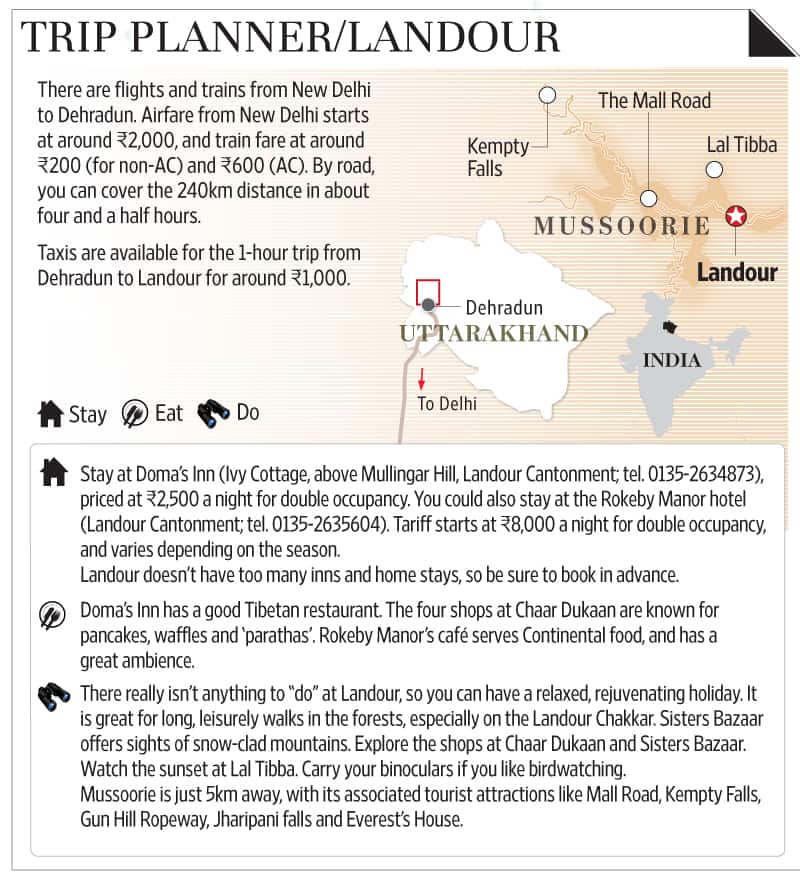 A Jeep roars past us, enveloping us in black smoke. I glare at it in annoyance and look around—we are perhaps the only tourists who are exploring the area on foot, and I remember what Bond wrote in an essay in Rain In The Mountains—that those who walk for pleasure grow fewer by the day.

My watch tells me it’s about 7pm. The day’s sunlight is abating. It’s time to disturb Bond. I walk back to Ivy Cottage, climb up to his house, and ring his doorbell. He opens the door himself. I’ve gathered from reading reports of people meeting him that he’ll probably say he’s busy, and he does. “I’m sorry, but I’m in a meeting with publishers from Delhi," he says. But he isn’t in a hurry. He stands at the door for a while, asks me where I’m from, and tries to make small talk with my daughter. She tells him she has read Tigers For Dinner. And then I freeze. It is his book, right? He has written in his journals about people thrusting Enid Blyton and Mark Twain books at him and asking him to autograph them. I’ve read so many of his books—and yet I can’t escape this spasm of doubt that sends my mind into a spin. But he nods, and says, “That’s a good book to start with." I relax—I hadn’t realized I had been holding my breath!

He apologizes again for not inviting us in, and we leave. I’m thrilled and speechless—and thankful that I’ve gotten to meet him.

Now that I know exactly where Bond’s house is in relation to our room at the inn, I realize that our room shares a wall with his house. To think that just across the wall is Bond’s little room, from where his work has been going forth into the world for decades! I feel smug, like I’ve discovered a secret that none of his other fans are in on. At night, the lights of Dehradun in the valley below twinkle, mirroring the stars in the sky. He has written about how pretty this sight is, and now I see it for myself, much like he himself can, one wall away from me.

We spend the next two days walking around Landour. We buy peanut butter and marmalade at Sisters Bazaar, where the nurses’ dormitory still stands. We soak in the sunset at Lal Tibba, the highest point on this hill. We sit down in the forest listening to the wind whoosh through the deodars and the birds chirp.

I have the feeling that I’ve dived into one of his books. I seem to see his characters everywhere, but I don’t see Bond again, even though I keep my eyes peeled for another sight of him.

There is one last thing I want to do—watch the dawn break from my window, the way Bond sees it. But I wake up the morning of our final day to see dark skies, and rain lashing at the cottage. The roof trembles, and I smile as I remember what Bond wrote in a journal entry dated 8 October 1984 in Notes By The Wayside: A Writer’s Log Book. He had just paid the rent for his rooms in advance for a year, but, he wondered: “Ivy Cottage looks shaky. Will it come down next monsoon?"

In the 30 years since, it hasn’t, much like its inhabitant.

Shruthi Rao is a Bangalore-based writer. She writes short fiction and non-fiction for adults and children.