We used to only like explosions of colour. Now Indian prt is discovering unembellished 'greige'

They don’t want to be called minimalists. They don’t reflect India’s youth culture, they insist. It is not even a deliberate rebellion against embroidery and surface decoration. All the same, a noticeable and growing group of designers now confidently creates clothing that was alien to our local aesthetic: bare, simple, pared down, easy to get into, unembellished, without a stitch of embroidery or beading, dominated by a greige (grey and beige) palette and muddy browns, charcoal, ecru, dull purples and greens, indigo and muted mustards. Whites and blacks too.

Their fabrics are natural and textured. There is emphasis on linen, handlooms, Khadi, cotton and some knits or blended silks. These designers work with yarn-created patterns and dyeing or printing techniques such as Bandhani, Shibori, clamp-resist and ombré. But they keep their designs sparse. They create dresses, jackets, shirt dresses, tunics, pants and deconstructed local silhouettes, saving Indian prêt from drowning in the sea of ready-to-wear from international brands.

That’s also how these designers define themselves as consumers and creators. They make what they would wear themselves. This trend was softly noticeable a couple of years ago, but today you cannot ignore this aesthetic if you buy or document fashion.

Stores selling fashion are witnessing an inflection point; the merchandise is now far more diverse. This is true Hindustani Normcore; an identity shift. It symbolizes the work of designers who have rejected glitter, bridal, even the conventional “prettiness" of lace and net. Kolkata-based Kallol Datta has stuck to this genre unwaveringly for more than six years now, but Aneeth Arora of péro, who also started with this sensibility, has made her creations distinct by adding subtle embroidery.

At the recently concluded Spring/Summer 2016 edition of the Amazon India Fashion Week (AIFW) in New Delhi, and the Winter/Festive 2015 edition of the Lakme Fashion Week (LFW) in Mumbai in August, designers such as Datta, Ruchika Sachdeva of Bodice, Urvashi Kaur, Shani Himanshu and Mia Morikawa of 11.11/eleven eleven, Anavila Misra of Anavila, Rina Singh of eka and a couple of debutants embodied this shift.

They showed clothes made from pure fabrics or innovative blends paired with tan leather lace boots, youthful slip-ons or white sneakers, denoting a relaxed context and accessibility. No stilettos, no slinky cuts. Singh, whose AIFW collection “Bu-colic" was inspired by the countryside, calls her clothes “one pieces" that can be layered anyhow, anywhere, anyway, even as two dresses on top of each other. She worked with checks and stripes on linen, cotton, Khadi, silk and linen blends with yarn dyes and colour gradation. Weaving silver or bronze yarn with linen is hardly a simple process. But it is this kind of simplicity, heaving with design impetus yet made to look absolutely unaffected, that defines Hindustani Normcore. “I was always a grey and beige person. I wanted to show my work in Delhi and decided to remain true to myself," says the Mumbai-based Misra, who showed a couple of plain linen tunics for the first time. At exhibitions and fashion weeks across the country, she says, she has found clients and store buyers who love this sensibility. “Textiles make their own noise, I don’t want to add anything to them," she says, adding that she wants to create for women who want to wear Indian clothes and saris abroad without looking traditional.

Sachdeva, who launched her label Bodice four years ago, says these plain, dull clothes that are now a trend initially signalled a silent rebellion for her. “I came back to India after studying in London and found that there was a huge gap in our market regarding Indian prêt. Either there were international brands with Western silhouettes or it was salwar-kameez sets and saris. I wanted to create something for girls like myself, or even for slightly older creative women who express themselves through clothes, who want to wear fashion every day, even though then I was scared of colour," says Sachdeva.

It is not incidental that a majority of these designers have studied abroad or that their Indian origins, combined with global education and exposure to manufacturing processes, have armed them with pragmatic strategies. It is also, of course, a reaction to the market’s embellishment and embroidery fatigue.

Bland and bare has become a commercially sustainable segment, or “tried and tested", as Sachdeva calls it.

Urvashi Kaur, who has consistently worked with ombré, Shibori, and other techniques on Khadi, cotton and knitted blends, showed such a line, Pathika, at the LFW and launched a sub-brand called Kapda at the AIFW. “It is prêt, a pared down version of my work, simpler, chic, relevant, inspired from Indian silhouettes while exploring textiles, yet better priced," she says. Kaur says there is a growing clientele in India and West Asia, which is where she sells primarily, for simple, textured clothing. She also sells through Web portals. “Even in this Diwali season, I have been able to launch these colours. The shift is not only among rich, elite, urban women. When the product is priced under ₹ 12,000, even girls from tier II and tier III cities are willing to experiment. That’s how the market is growing," says Kaur. 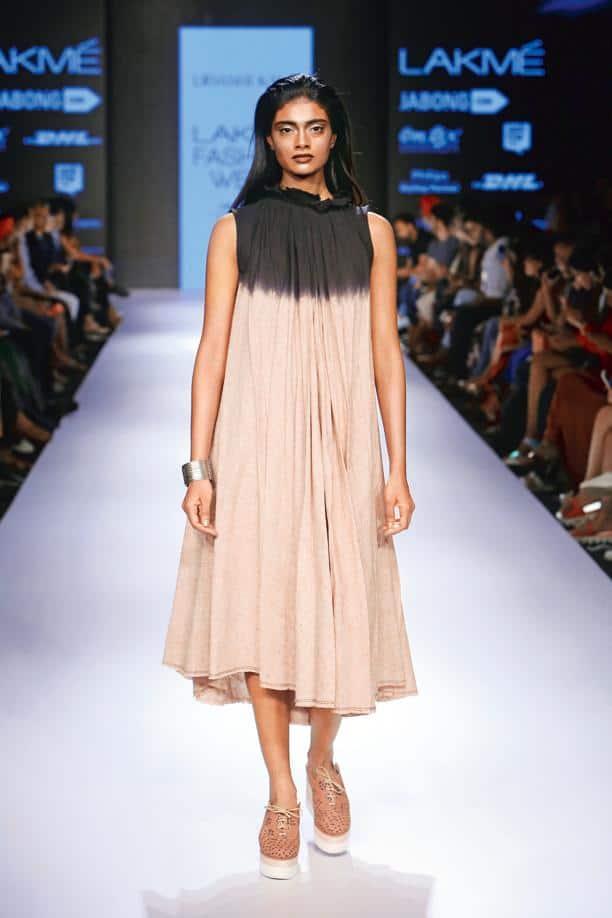 11.11/eleven eleven showed The Khadi Way at the AIFW. It used forms of construction inside out, details that usually lie inside a garment, according to the collection note. The fabrics were solid and the colours were indigo, ecru and mustard, with flashes of pink. All this to the tune of music by independent musicians led by Stefan of The Ska Vengers and Jazz Bastards.

How will these designers stand apart? They are already beginning to mirror aspects of each other’s work. Designers find it insulting to be asked such questions, but just as all crystal-encrusted lehngas begin to look similar in a melting point of decorative wear, all ecru-coloured linen and Khadi dresses, or indigo-dyed striped or chequered dresses paired with tan boots, run the same risk.

“The answer lies in a series of rebellions by questioning the established. I am already questioning why colour can’t be classic or minimal," says Sachdeva. Singh adds, “I can’t give the same clothes to customers for eight months. There has to be a revitalization, and so while one is balancing the basic as a business model, there has to be a new energy." She included crimson-red linen this time to move away from the predictable while sticking to her brand promise.

Low-key fashion will survive, for simplicity and flamboyance coexist in the Indian market. In fact, relaxed, off-the-peg clothing that is neither couture nor mass-manufactured by chain-retail brands could eventually define Indian prêt. For that to happen, however, designers need to work on price points and make their work accessible and affordable—and not just in look and feel. At the moment, designer separates in India cost anything from ₹ 4,000-40,000—which pushes prêt into a grey area.