Home >Leisure >Pramila: a trendsetter in her conservative community

Pramila: a trendsetter in her conservative community

Pramila: a trendsetter in her conservative community

On the border of Delhi, en route to Faridabad, lies the township of Badarpur. It is home to many migrant communities, among them the saperas (or snake charmers). Known locally as the Sapera Basti (snake charmers’ colony), the small settlement of single-room shanties, made mostly of loose bricks piled together, houses about 150 families. The primary occupation was to catch snakes and use them to provide entertainment. 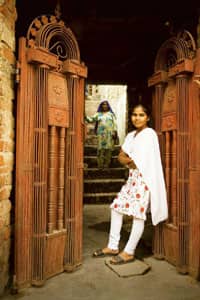 Generation gap: : Pramila’s mother Soma worries that her ‘over-qualified’ daughter will not find a good match within their community. Harikrishna Katragadda / Mint

A tight-knit community, the saperas live by their own rules and are governed by their own panchayat. Girls, once they reach puberty, are hardly allowed out of the house and that’s why most are schooled only up to class V.

In such a conservative community, bringing about change can be a Herculean task—one that Plan India, in association with Community Aid and Sponsorship Programme (CASP), has taken up. “Our biggest challenge has been changing the attitude of the parents towards their daughters. Girls as young as seven or eight years are laden with the responsibility of looking after household chores and managing younger siblings. The parents from these communities have no concept that their child has a right to a better life," says Ashok Sharma, project director, CASP Plan project, Delhi.

But one spunky 18-year-old girl has managed to break free of these oppressive traditions. Pramila is the only girl from the basti who has passed her class XII examination and hopes to pursue a bachelor’s degree in social work from the Indira Gandhi National Open University (Ignou). “In my community girls are usually married early. Most parents want them to work in the house and have kids. But I never wanted that life for myself," she says.

Pramila is slim, has an unwavering gaze and once had a black snake for a pet. She recalls that when she turned 11, her parents, elder sisters and brothers-in-law wanted her to stay at home. “I had seen what happens to most girls—their husbands are wastrels, usually drunkards and wife-beaters to boot. I was determined not to be married off young and meet the same fate as my friends."

She remembers urging her mentor at the CASP Plan project to come home to speak to her parents. “I was lucky that Dharamveer sir could convince my father that I be allowed to study beyond class V." It took lots of persuasion and some hard talk before Pramila was allowed to leave her pallu-clad existence within the house and carry on at school. “My parents wanted to know what benefit education would bring to the family. When Dharamveer sir explained that education would make me self-reliant and that I could stay at home and still earn money by taking tuitions, they were finally convinced."

The fourth child among six, Pramila become a sponsored child at the age of 5 under the CASP Plan project that began in the Badarpur area in 1995-96. At the time, children under this plan were provided regular counselling, given life skills training, helped with tuition fees at schools and made members of the local Bal Panchayat. “Now the CASP Plan project works with the community on educating them as a whole rather than doling out monetary benefits," says Sharma.

As a member of the Bal Panchayat, Pramila got a chance to attend a children’s meet in Barcelona in 2004, making her the only girl from her community to have travelled overseas. “The sea was so beautiful there. I wrote a story there about a saint and a rainbow-coloured parrot which was published in the magazine we made."

Lately, Pramila has secured a temporary position at one of CASP Plan’s Badarpur units (she earns about Rs2,000 a month) as a peer educator trained to speak about adolescent health issues. She is working towards fulfilling her dream of teaching children and eventually becoming a social worker and has even applied for aid for her bachelor’s degree.

Every evening, when she returns from the CASP Plan centre, she teaches English, math and general knowledge to about 10 children from the basti. “I can teach children in class V or VI with ease. In fact, I teach my younger brother, who is in class VI." To help out her family, she pays Rs400 for coaching classes for her two younger brothers. The rest of the money is saved so that she can fund her plans in case the aid doesn’t come through. “Most girls, my friends from the area, are envious of the way my life is progressing. They often tell their parents that if they had been allowed to study instead of being married off early, they too could have been self-reliant."

IF YOU WANT TO VOLUNTEER