After the excellent EOS (electro-optical system) 7D that introduced a host of new features, it was only a matter of time before this technology trickled downwards, into lower-end bodies. The 60D is exciting because, like the lower-end EOS 550D, it features a lot of the goodness of the EOS 7D at a slightly lower price point. 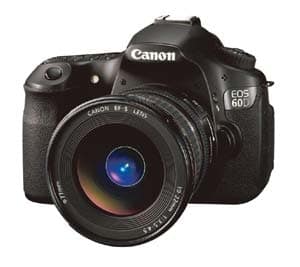 The battery compartment is small since it holds an SD card, and not the larger CF variety. The battery is hefty, the same one as the EOS 7D, rated at 1,800 mAh. Canon states battery life to be over 1,000 shots; we found that clicking some 150 shots with flash used one-fifth of the time, hardly drained any juice, and the battery still showed 80%—pretty good.

The LCD viewfinder is pretty good, in fact about as good as we’ve seen. The 1,040,000 dot display means it’s sharp, and crisp, and minimal zooming is required to check the sharpness of an image. Incidentally, burst mode will have the first flurry of photos taken quickly, then, as the camera runs out of available buffer, the speed slows till the buffer has written enough to the memory card to accept more data. Focusing is slightly slower, and in lower light, this becomes more noticeable. Where speed is critical to get or miss a shot, the 7D should be preferred. However, even with one Digic 4 processor less, the 60D is no slouch in its own right.

The 60D is capable of producing excellent results, in fact the output of the 60D is clean, neutral and full of details. One of the advantages of cramming 18 megapixels on to a smaller 1.6x crop sensor is the sharpness. The 60D produces very sharp images in good and mediocre lighting. There is a lot of detail visible and the high resolution helps. The trade-off is usually lower performance in low light, owing to high density of photodiodes, but the 60D survives this technical restriction rather well. Even in low light, and higher ISOs, images retain a lot of detail—it’s obvious that the 7D sensor is working its magic on the output of the 60D as well. Even at ISO 1600, the 60D manages a lot of detail, with some smearing of detail happening in darker regions of the image, and with a bit of grain. At ISO 3200, the 60D leaves the 50D behind by a big margin, proving that a current-gen, 18-megapixel is a lot better than a 15-megapixel unit of yesteryear. If you shoot in RAW, you will be able to extract even more detail.

The Philips 46PFL8605 looks beautiful with the glossy bezel, a matte-finish on the 46-inch screen, the TV base made out of glass and the proprietary Ambilight strips on the sides. The TV is slim and you can mount it very close to the wall thanks to the recessed ports on the rear side. Philips has laid a lot of stress on user-specific screen setting with dumbed-down elements such as selecting the better photo from the split-screen, selecting the preferred sound from three sources, etc. The HD movie-viewing experience was quite good thanks to the high contrast ratio. Upscaling of standard definition content did have some issues with pixellation. Ambilight LEDs were very responsive not just in terms of reproducing the hue of the scene-playing but also varying the intensity accordingly. The LAN port can connect to your network, and play media files off your network, which is a nice plus.