Sania Mirza finishes as No.1 doubles player for second year in a row

“It’s very, very exciting to finish two years in a row as No.1," Mirza told WTA after the rankings were declared in Singapore on Sunday. “It’s been an incredible year for me again, with seven WTA titles, a Grand Slam and ending the year at the WTA Finals in Singapore. Finishing the year No.1 is amazing—it’s a dream come true and gives me motivation and inspiration to come out and work even harder next year." 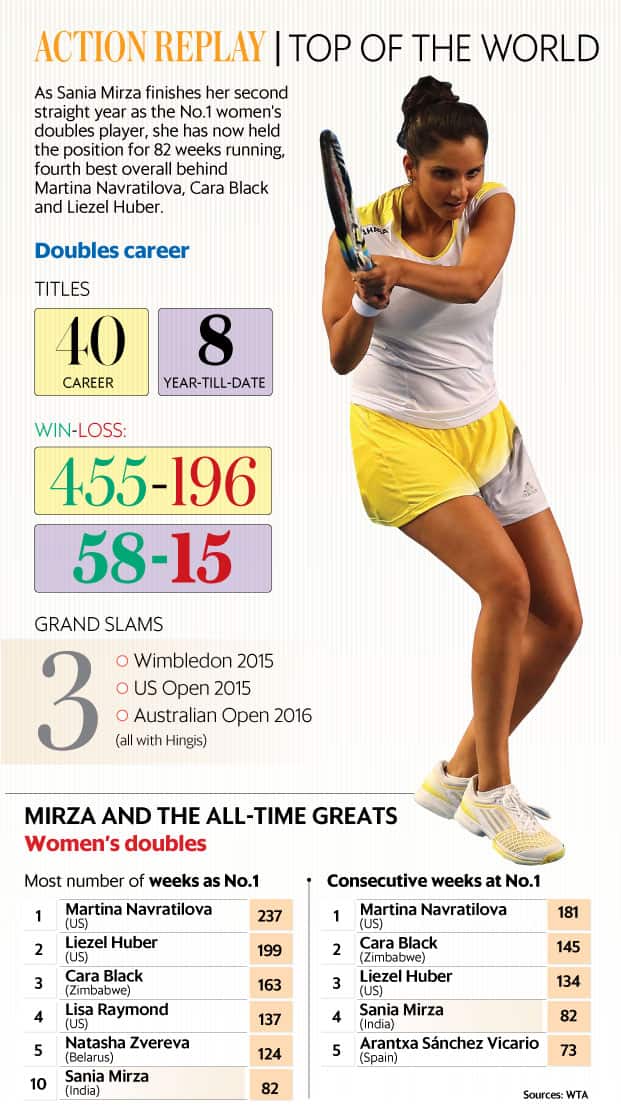 “For me, this has been an unbelievable journey and the kind of stuff that dreams are made of! I’ve always felt that reaching the pinnacle in any sphere of activity is a huge achievement but staying there for a prolonged period is even more difficult than getting there for the first time," Mirza told PTI.

Huber was Sania’s partner with whom she won her first WTA title in Hyderabad in 2004 and Black was her partner in her first WTA Finals title win in 2014. In 2015, she partnered with Hingis and went on a 41-match unbeaten record during which the duo won several titles, including the Wimbledon, the US Open and the WTA Finals (all in 2015) and the Australian Open in 2016.

That partnership broke after the disappointing result at Wimbledon this year. The Indian star began a new partnership with Barbora Strycova starting at the Western & Southern Open in August. They won the title and repeated the success at the Toray Pan Pacific Open.

Mirza and Hingis came together last month to defend their WTA title in Singapore but failed to do so after they crashed out in the semi-finals.

The 30-year-old player from Hyderabad has won 40 doubles titles in her career, eight of which have come this year, including the Australian Open.