An open letter to the Indian television god

An open letter to the Indian television god

Where have you been? What do you have against Indian women? What twisted misogynist scheme of yours draws Indian women to watch prehistoric television serials where they are raped, insulted and slapped around with alarming frequency? 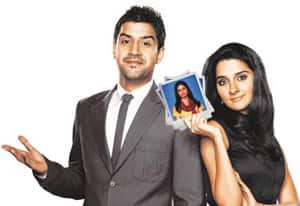 No more tears: Rishta.com and other YRF shows give the glycerine a miss.

But it’s us women who ensure that the scary serials score robust TRPs of 5 and 6 week after regressive week.

The upwardly mobile, progressive, urban creative teams at the channels that air these shows say we love them because they are the Village Voice, i.e. real India. They depict hardships we don’t encounter and thus make us feel more comfortable about our lives. They even claim to “educate" us about child marriage. The TV types’ favourite line of defence is that these things really happen in India. Child marriage, rape, abuse and all manner of assorted crimes against women actually exist in India.

As I am writing you this letter I just thought of an idea that could become a TRP-magnet of a television script on any of our leading Hindi entertainment channels. I recently read that last year in Delhi, a majority of rapists turned out to be the neighbour. Why not a serial about a friendly rapist neighbour who lives next door to a couple that, alas, has only daughters (the younger the better, since India is full of paedophile perverts) even though they tried four times for a son and aborted three foetuses. Guaranteed hit. And it happens in India, wouldn’t you agree?

Anyway, I’m digressing (please don’t switch channels). When I asked my mother, an avid watcher of these serials, to tell me if there was a single “woman-oriented" serial that hadn’t featured rape, she couldn’t name any. So why did she watch them then, I asked her for the millionth time.

Because there’s nothing better to watch on Indian television, she said.

But that was a few weeks ago, before Yash Raj Films (YRF) launched its shows on Sony. Actually god, I’m writing to thank you. I know this letter starts off a little rudely, but really, thank you. Could it actually be that you’ve decided to give Indian television viewers another chance?

I loved YRF’s new shows. What great production values. No garish outfits. Women actually dress in skirts. And trousers. And they have proper crime-fighting jobs. They tackle real world sexist pigs smartly (i.e. not by crying). In fact, I could be wrong, but I can’t remember a single mother-in-law on any of the four new fiction serials. Storytelling, it seems, is finally back on the small screen. Thank you dear god.

Now all you need to do, and I will be your humble slave if you succeed, is to convince Indian television viewers that this is a more authentic depiction of real India today. That they should switch channels with immediate effect.

Director Kabir Khan, who’s part of the YRF creative team responsible for these shows, says that if anyone can do it, this team can. And really, there’s no reason why television should be so regressive in an age when Hindi films are more experimental than ever. Khan says the main reason television and film “seem to be on two different planets" even though the same people are watching both is because there’s no viable alternative offered on the small screen.