Millennia from now, when our planet’s eventual alien rulers sift through the rubble of our post-apocalyptic world for stuff to put in museums, the first decade of the 21st century AD will probably be represented by an iPhone and some sort of Harry Potter merchandise. I’d have added a Rajinikanth film to the list, but Rajinikanth will probably still be alive and kicking ass in that distant future as the overlord of this arm of the galaxy. 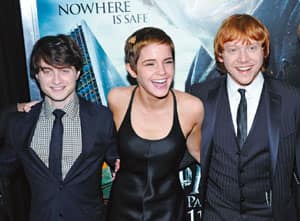 J.K. Rowling’s contribution to 21st century culture, though, goes beyond Harry Potter. There are other authors as popular as Rowling, many of whom have written a lot more than she has and over a longer period—but none in as crowded a world, with so short an attention span, none who have withstood the glare of such continuous, obsessive scrutiny while single-handedly running such a massive project. She’s responsible for the reinvention and reinvigoration of that present-day phenomenon we’ve begun to take for granted—the entertainment franchise. The Harry Potter film mega-industry (eight films, 10 years, $5.4 billion, or around ₹ 24,300 crore, and counting) makes pretty much everything else look house-elf-sized. It’s difficult enough to put a single mega-budget, multi-star project together without spawning blood feuds and mass nervous breakdowns. Putting eight huge films together with the same principal cast and crew, and getting the world to stay excited, is nothing short of epic.

Star Wars and Star Trek are the gold standards by which entertainment franchises were measured prior to the arrival of the bespectacled boy wizard. The idea that a story needed to cross over in multiple media—books, films, TV, animation, comics, video games as well as toys, board games, puzzles and other merchandise—was not a new one, but no one got it better across media than Potter. A great story for all ages and genders, stunning visuals and innumerable props: Potter is geeky but cool, weird but relatable, heroic but vulnerable and, best of all, he is current, unthreatening, lovable, and supremely sellable—the heroic equivalent of ice cream, or bubble-wrap. Other lead characters in franchises still primarily belong to one medium—Star Wars in films, Star Trek on TV, Indiana Jones in film—but thanks to Radcliffe, Watson and a stellar supporting cast and crew, the films got a life of their own—and brought life back to the British film industry.

Which leads us to the question: What will the entertainment industry do after Harry Potter finally (almost) ends? Several other franchises have been attempted but none have succeeded on the same scale, all ending up annoying (Shrek, Eragon), inconsistent (Batman, Bond, Spiderman), dated (Narnia, Superman) unable to match up to the books (His Dark Materials, Percy Jackson) or simply weighed down by real-world practicalities (The Lord of the Rings/The Hobbit, Hellboy). The only really successful franchises currently running are the charming Toy Story and the execrable Twilight. Suzanne Collins’ The Hunger Games series is supposed to be the next Next Big Thing, but lacking Hermione’s sadly under-utilized Time-Turner, it is presently impossible to tell. After all, nothing is certain except death, taxes and Rajinikanth.

Harry Potter and the Deathly Hallows: Part 1 released in theatres on Friday.