The cast of Ram Gopal Varma’s latest movie Agyaat includes Priyanka Kothari, who has often been described in the media as his “muse", simply because she has starred in so many of his films. For Varma’s fans, Kothari (formerly known as Nisha Kothari) is a vast comedown from Urmila Matondkar and a downmarket version of Antara Mali. A closer look reveals that there’s nothing that really distinguishes one from the other two. They are all petite. They all pout. They are highly sexualized women whose come- hitherness is directed at the audience rather than at their heroes. They exist so that male viewers can gaze upon them and feel proud that the more Hindi cinema changes, the more it stays the same. 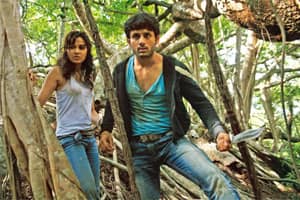 The horror: A still from Agyaat.

Everybody has a theory about Varma’s fall from grace. I blame his sudden turn for the worse on his decision to make the heroine do double duty as love object and item girl. There were hints of his slightly unnerving worship of the female form in Rangeela. His devotion became more blatant through the years and reached its nadir in Nishabd.

Before Rangeela, Varma was known for three films, neither of which particularly dwelt on the female form. One was the Telugu director’s Hindi breakthrough Shiva, about student politics. Then there was the spine-chilling exorcism drama Raat. Drohi was a precursor to Satya in that it was about a strong-and-silent criminal who is transformed by the love of a good woman. In Drohi, Matondkar played an ornithology student who likes to take long walks in forests and celebrate the beauty of nature. A few years later, Matondkar was spotted sprinting down a beach in nothing but a white T-shirt. Yet, by making Matondkar’s character in Rangeela an actor who was merely enacting a role in the movie within the main movie, Varma neatly justified the sexual charge in such songs as Tanha Tanha and Hai Rama.

From Satya through Kaun? and until Company, Varma threw up interesting female characters, who were as much a part of the film as were the men who drove the plot. Satya’s Vidya represented purity and hope. Company’s Saroja, the first and probably last Hindi movie moll with a Tamil Brahmin name, had grace and dignity. By churning out movie after movie, he kept reviewers and box-office counters busy. He was no longer only a film-maker. He was also a mentor whose production house, ironically called The Factory, gave several directors and writers their first break. It was too good to last. The Factory needed pin-up girls to sell its wares.

The first cracks appeared with his productions, which he vastly influenced with his inputs. Road, Gayab and Naach were voyeuristic in an adolescent way. My Wife’s Murder was about a shrewish wife whose punishment was death. By the time we reached Go via Mr Ya Miss, the most interesting things about Varma’s women were that they were all Matondkar lite.

Varma’s own films in recent years have been obsessed with a male-dominated cesspool bubbling with power politics and crime. There’s little for women to do in this testosterone-heavy universe except be rescued (Shiva redux), be good wives and serve dal-roti (Sarkar) or be like men (Sarkar Raj). Neither Agyaat, a horror movie set in a forest, nor his forthcoming Rann, about corruption within the media, seem to have the space for Matondkar or her avatars. But Varma compensates by shooting raunchy music videos in which Kothari tries to appear seductive. The director, capable of making grown-up films, is always sure to cater to the man in the cinema hall who never stopped being a teenager.