June was a busy month for tech announcements. Microsoft announced its new tablet, Surface, expected around October. Apple announced iOS 6, which will be available later this year. And last week, Google announced the Nexus 7, running Android 4.1, Jelly Bean. For Google and Microsoft this is a particularly bold move, as it will definitely alienate some of the hardware partners that these software giants rely on.

If you’re a new tablet buyer, things have never looked better. But with all three now presenting highly polished devices, what’s best for you? 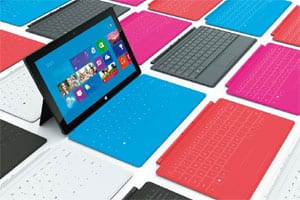 You could use the Surface as your laptop at home, as a tablet on the way to work, and then, connected to a screen, it could be your work computer. Surface for Windows 8 Pro will be running the full version of Windows, so all the software your office needs will run on it.

Unfortunately, Microsoft hasn’t disclosed enough about the Surface yet—details such as battery life and RAM are not known, and exact pricing and availability are not clear yet.

Who’s it for? Microsoft says it will cost “around as much as an ultrabook", making it a good option for professionals or businesses. If you’re looking for a computer replacement, this might be just the thing, because the Windows 8 Metro interface is fast, clutter-free and easy to use.

The 9.7-inch iPad is the most well-established tablet today. The new iPad’s USP is its retina display—it’s ideal for reading books, magazines or websites.

The OS updates are also more timely and comprehensive for Apple devices than any others. Almost 10% of Android devices are running Android 4.0 six months after its launch, and now, Android 4.1 has been launched. Windows Phone 8 won’t work on any Windows Phone 7 handset. The 2009 iPhone 3GS will, however, get iOS 6 on launch.

The iPad is not a full productivity tool, though many people are finding ways of using it as one. It shines as a media device and has the widest range of apps.

The downside is that everything is very regulated. Despite improvements with iOS 5, you still need to use iTunes to access your device. All apps also have to be approved by Apple, unlike Android devices where you can load software directly from your computer.

Who’s it for? The new iPad is a great buy for people who’re looking for a media device that also has some of the best apps. It works without any complication, and is easily the most user-friendly device.

Google is now selling not just apps, but also books, music, movies and television episodes on the Play Market, and this additional content gives it a big push.

The Nexus 7 is also the first machine to get Android 4.1. Based on what we’re seeing so far, it is the most polished Android OS so far. Lots of minor annoyances, such as the arranging of widgets and icons on the home screen, have been smoothened out.

At the same time, basic features such as Maps, Voice, and even the basic touch-screen user interface have been given updates. The most interesting new feature is Google Now—it uses navigation data and your calendar to predict your plans, and show you information that Google thinks might be useful, such as local bus schedules, weather information, or nearby restaurants.

Offline documents, offline maps, offline voice dictation and even offline YouTube (based on browsing, Google predicts what you want to watch next, and downloads that while the current video is running) add value to Android as well.

On the other hand, as the most open and customizable mobile OS, Android is also the most vulnerable to viruses and malware. And, of course, fragmentation remains a problem, which is why apps usually head to iOS first.

Who’s it for? For a budget-conscious buyer, the Nexus 7 offers the best value-for-money tablet experience.