In daylight, the first greenfield seven-star hotel of the Apeejay Surrendra Group—its most expensive, at an outlay of ₹ 350 crore—isn’t exactly imposing, except for the post-modernist, criss-cross façade by Skidmore, Owings and Merrill, which clearly doesn’t belong in the mundane milieu of Raj Bhavan Road. The truth is, like a Vegas hotel, The Park in Hyderabad only comes into its own once the sun goes down—various recessed, chandeliered and ambient lights are switched on, the pool bar opens and an illusion of Nizamian royalty is created.

A Leed Gold certification from the US Green Building Council also means The Park has its yin and yang in order. The building consumes 35% less energy than similar hotels, so tree huggers can rejoice. “We have sought to break the myth that designer hotels cannot be environmentally friendly here," says Anurag Bajaj, general manager.

The aristocratic theme kicks in from the Street Lobby itself. The floor tiles are purple Metron Bisazza, inlaid with semi-precious stones, while the ceiling above the counter is a Preksha Baid acrylic artwork inspired by the designs from a Nizam’s turban. 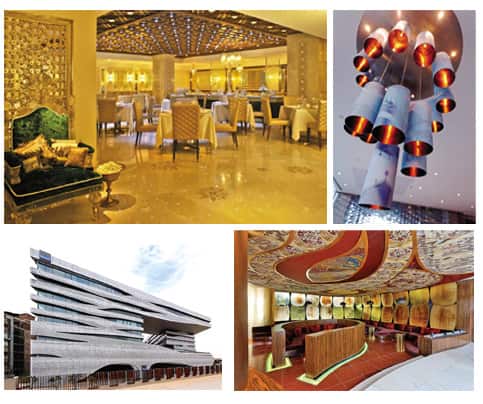 Green opulence: (clockwise from above) The post-modernist facade of the hotel; the Aish restaurant designed by Tarun Tahiliani; a Charminar-inspired Preksha Baid chandelier; and the Kalamkari ceiling of the Ruby Lounge.

Arguably, the most extravagant of restaurants at The Park is Aish, the Indian restaurant designed by Tarun Tahiliani. Swarovski crystals and pearls lie scattered about on the mother-of-pearl inlaid serving platforms here, giving the impression of careless opulence. Black and white silver-framed prints from the Nizam era cover the walls under a giant Swarovski chandelier. Zebra-striped cushions and napkin rings offer visual relief amid the dazzle. Surrounded by such wanton luxury, with stewards spraying ittar and waiting obsequiously upon you, it is not hard to fancy yourself of royal blood.

Another restaurant, Verandah, designed by the UK’s Conran and Partners, finds inspiration in the colonial era. Modelled on the British concept of an open-air sit-out, this sunny restaurant is done up in colourful easy chairs, indoor plants and jali partitions. You are losing count of designers by now—there are tables by Gunjan Gupta, lights by Romeo Louis, a private dining area by Baid. Outside is the other al-fresco restaurant, Aqua, next to the swimming pool which segues exhilaratingly into the choppy Hussain Sagar.

Numismatists would be especially pleased with the Sicca (Urdu for coin) Bar. Its oak-wood walls are covered with inscriptions of coins designed by ChoChoSan from the UK; the food is similarly themed.

Finally, the rooms, done up in impeccable white, are large and hum with a deep quiet. No surprises here—a media hub with a 42-inch LCD TV and DVD player with ports into which you can plug anything from an iPod to a pen drive. Bathrooms come with rain showers, deep-sink bathtubs and walk-in closets.

All through, The Park alternates Nizamian baroque with contemporary minimalism. Sometimes they blend seamlessly, but often, the effect can be one of an art gallery—individual pieces with no common theme. The main reception, for example, has Moroso chairs by Alfredo Haberli and Splash tables out of a sci-fi film. Right next to it, the ceiling has inverted brass domes, a Nizam motif. Across the room are settees with cushions of deep-red satin and chintz, a distinctly West Asian look. No unifying gestalt screams out at you—just a number of beautiful pieces sit disconnectedly side by side.

Prices range from ₹ 15,000 for a single-occupancy luxury room to ₹ 1 lakh for a double-occupancy presidential suite.