For the next four months, the Devi Art Foundation’s foyer will have a stack of inflatable gunny bags. A set of buttons will let you pump or deflate the contraption; a surveillance camera will scan the scene from the landing above. The Orwellian dystopia evoked by Panic Room, an interactive installation by L.N Tallur, is matched by Atul Bhalla’s collage of Mumbai drain covers—which looks, at first, like the facade of one of the city’s building complexes. You get the message: You live in a shit hole.

The Devi Art Foundation, the Gurgaon outpost for the private art collection of hoteliers Anupam and his mother Lekha Poddar, opened its latest exhibition of contemporary art on 27 August. Works by 40 artists from six countries come together in Home Spun, an exhibition curated by Girish Shahane, which navigates the locational and emotional dimensions of “home". On the first floor, in a gallery called The Apartment, you encounter a room in which artists such as Sudarshan Shetty satirize the mundane by turning household objects into strange artefacts. There’s a dining table loaded with wine glasses set in an unceasing see-saw motion; a couch that bleeds; and a fruit that bites you before you can. Minam Apang’s antique typewriter produces art. These suggest a dysfunctionality more interesting than what daily routine can offer. There is also a grounded ceiling fan by Prajakta Potnis, covered in what appears to be white moss (fashioned with beads). It stands in for neglected objects that get layered with the memories of the person using them. 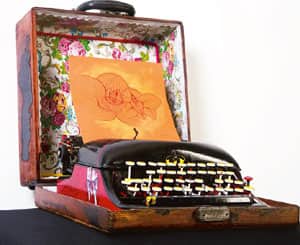 Home is a safe haven. But one that you want to escape.

Once there was utopia

In his catalogue essay, Shahane writes of the dawn of the Industrial Age in West Europe and North America, when a new class of migrants moved from country to city, stripped of what is evoked when we think of home: property, sanctuary, community. Borrowing an imperial Roman term, Karl Marx labelled this class the proletariat. He suggested its members were natural revolutionaries because they had “nothing of their own to secure and fortify", and nothing to lose but their chains. European romanticism responded to this rupture by cultivating ideas of melancholy and nostalgia—the latter derived from the Greek words nostos, meaning “returning home", and algos, meaning “pain".

Iranian artist Neda Razavipour addresses this pain in the second gallery of the exhibition, referred to as The Palace. Self-Service, the most violent of the exhibits, is a collection of Persian carpets strewn on the floor. Visitors are invited to cut patches and take them home. For Iranians, says Razavipour, carpets are the first thing they bring into a new house. “They symbolize heaven, nature, comfort and calm."

A more direct manifestation of this yearning to return home, the pain of self-exile as it were, is in Sri Lankan artist Anoli Perera’s Dinner for Six. Her installation is a dinner table caught in the web of time. The crochet and lace tablecloths of her childhood memories spin around this idealized frame like a spider would, freezing it as something to go back to.

Unlike the West, Indian workers who moved to industrialized metropolises retained strong connections with their birthplaces. They had something to go back to. Their extended families continued to reside in the gaon or village, and they returned each year for festivals.

This is evoked most handsomely in the final gallery, across the foundation’s courtyard, which hosts large-scale works, such as Subodh Gupta’s towering cavern of cow-dung cakes. My Mother and Me, as the title suggests, is a throwback to his childhood in small-town Khagaul in Bihar, when he would be sent out by his mother to get things for her daily puja: mango leaves and cow dung. Gupta now lives in Gurgaon. He doesn’t visit Khagaul often. But he will always have two homes.

My Mother and Me is also a salute to the audacity and sheer ambition of the Poddar collection. It was created in 1997—before Gupta’s signature steel installations were in museum collections around the world—and acquired at a time when buying a temporary installation such as this was unheard of in India.

Shahane says Anupam Poddar had called him in March with the idea of an exhibition that explored the concept of home. It was on Poddar’s suggestion that he included found texts to supplement the artworks. These are art pieces in themselves, going from canonical to cult; from The Book of Genesis and Kama Sutra to Arthur C. Clarke’s 2001: A Space Odyssey and Sylvia Plath’s The Bell Jar.

Pakistani artist Noor Ali Chagani creates a man shrouded by a blanket of tiny terracotta bricks, buried in his ambition for a place to call his own. Home is material desire.

What the exhibition doesn’t explore fully, though, is true exile, a feeling of home-away-from-home brought about by factors beyond one’s control. In a recent show at Gallery Espace, Kolkata-based artist Paula Sengupta explored the changing notions of home that the partitions of 1947 and 1971—the creation of Pakistan and Bangladesh—brought about. Though the exhibition includes a few political statements, the exclusion of the biggest events in South Asia, which tweaked the notion of “home" for millions, makes Home Spun distinctly apolitical.

Still, the exhibition is pertinent at a time when a nomadic lifestyle is increasingly becoming the norm rather than the exception. Themes of migration and displacement are forcing us to reconsider and redefine the meaning of “home". Shahane writes, “Nobody’s idea of home is more fixed than that of the traditional nomad." With no static dwelling, no possessions, home for them is their habitat, which not only provides a livelihood but contains all that is most sacred to them.

Home Spun will be on view at the Devi Art Foundation, Gurgaon, till 27 December.The works are not on sale.