An Indian film has been selected in the competition section of the Cannes Film Festival after 16 years. Udaan, directed by Vikramaditya Motwane and co-produced by Anurag Kashyap, Sanjay Singh and UTV Motion Pictures, is about a teenage boy’s anguish about growing into a man. Motwane is the writer of films such as Goal and Dev. D and this is his first film as director. Udaan will compete in the Un Certain Regard category, which is a competition section parallel to that of Palme d’Or. It presents films which have a unique and original style.

Motwane shares with us his nervousness about taking his film to Cannes, tackling teenage angst in an Indian context and why independent film-makers are now concentrating on their scripts. Edited excerpts:

How does it feel that your debut film as a director is going to Cannes?

Honestly, I feel very pressurized right now. I’m honoured by it but my priority right now is to finish the film. It’s in the post-production stages and I have a long way to go to make it a perfect product. It’s a big step for me and Anurag (Kashyap). Actually for all Indians since it pushes the doors of world cinema open a little more for us.

Tell us something about the film. 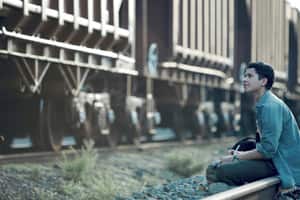 Alternative cinema: A still from the film Udaan

When did you start working on the film?

I started work on the script about seven years ago but the film finally got made only last year. Once the script was done, I had a tough time finding someone to produce the film. Many producers came and went but nobody was ready to commit to the film.

Just the regular commercial reasons. They wanted to add and subtract things to increase the selling value of the film. Finally, Anurag decided to produce the film. He was very supportive and allowed me my freedom.

What was the most difficult part of making this film?

Scripting it. And that is true of all films. It’s also the most important stage. If you get the script right then everything falls into place. After that it’s just a question of how good your film-making skills are. But if you don’t have a script, you don’t have a film. Apart from scripting, the exit of so many producers was also stressful.

Do you see yourself as part of the emerging breed of directors who are making alternative films?

I guess. But you must remember that this breed is not emerging now. Directors like Dibakar (Banerjee) and Anurag (Kashyap) have been around for a while now. It’s just that they’re getting noticed now. The audience is finally accepting alternative cinema.

When will we get to see Udaan?

We don’t know about that right now. But I hope that it won’t be too long after the festival is over.

Many Indian films win international acclaim but do poorly back home. Are you anxious about that happening to Udaan?

Not really. Since the film was well-scripted, it was possible to shoot it on a very small budget. It shouldn’t be much of an effort to recover that cost. Most independent film-makers make mistakes with their scripts. They try to tell the big-budget films’ stories using a smaller budget, which is counterproductive. Independent film-makers are now realizing that if your film is small then it’s important to bank on a strong script.