Home / Mint-lounge / Features /  McCluskieganj, Jharkhand | Remains of a promised land
Back
Share Via

Dreams of an Anglo-Indian Utopia that took birth in the 1930s, of which only bungalows, legends and a handful of families survive

After four days in McCluskieganj, the fountain I wanted to see had remained elusive. No one I’d met had a clue. This fountain, from what I’d heard, had an inscription marking the founding of the town of McCluskieganj. Somehow, leaving the town without seeing its symbolic birth certificate felt incomplete.

Giving up, I headed towards the station to take my train back to Kolkata. On the way, I stopped to look at an old bungalow, and asked the people there if they knew anything about the fountain. A hosteller pointed to “an old tap" in one corner of the compound. There it was. Undergrowth fringed a cemented platform of this “old tap". A bowl in its centre held dead leaves and bird droppings. Its sprinkler was dry. No water had sprung from it in decades.

McCluskieganj lies 70km from Ranchi in Jharkhand. Here, when the eyes travel away from hilltops swarming with clouds, from rivulets born again with the rain, and from wet-green leaves luminescent under soft sunbeams, and when the eyes droop shut to the lullaby of the night train’s soft rumbling, the mind inevitably gravitates toward the brooding remains of Ernest Timothy McCluskie’s ambitions and hopes.

McCluskie was a Calcutta-based real estate and insurance agent in the early 20th century. He belonged to the Anglo-Indian community, a class which because of its mixed Indo-British and European parentage wanted to, but couldn’t quite fit into either Indian or British society.

To India’s British rulers, the Anglo-Indians “represented no more than the shaming evidence of sexual transgression by the lower ranks", writes author Ian Jack in his book, Mofussil Junction. Being no less conscious of caste and class than the British, Indians found Anglo-Indians’ habits and ancestry deeply impure, Jack continues.

That refuge was McCluskieganj. Soon, Anglo-Indians from all over India bought land and settled here, lured by the prospects of ample fertile agricultural land, animal husbandry, rail and road connections and, of course, the dream that this would be their promised land.

For over three decades, McCluskieganj was a beacon of Anglo-Indian culture in the heart of the Chota-Nagpur plateau’s tribal belt. But McCluskieganj still stood in the middle of nowhere. Soon its lack of education infrastructure, job potential, internal bickering within the community, and dislocation from the urban highlife began to sour the residents’ dreams. Most families began to depart for a livelier future in Indian cities or abroad from the 1940s onwards. By the late 1970s, less than 30 families remained. The once ubiquitous sounds of pianos and boar-hunting rifles gradually fell silent.

The era of the British log (folk), as Anglo-Indians are often referred to, is a conversation starter at local eateries. The parties, music, ballroom dances, hunting, mahogany furniture, fear of the white sahibs, uppity airs and rumours of illicit affairs from the days when the town was called “chhota London", are smattered across conversations. Many of these tales often seem like the result of a game of Chinese whispers running across decades. 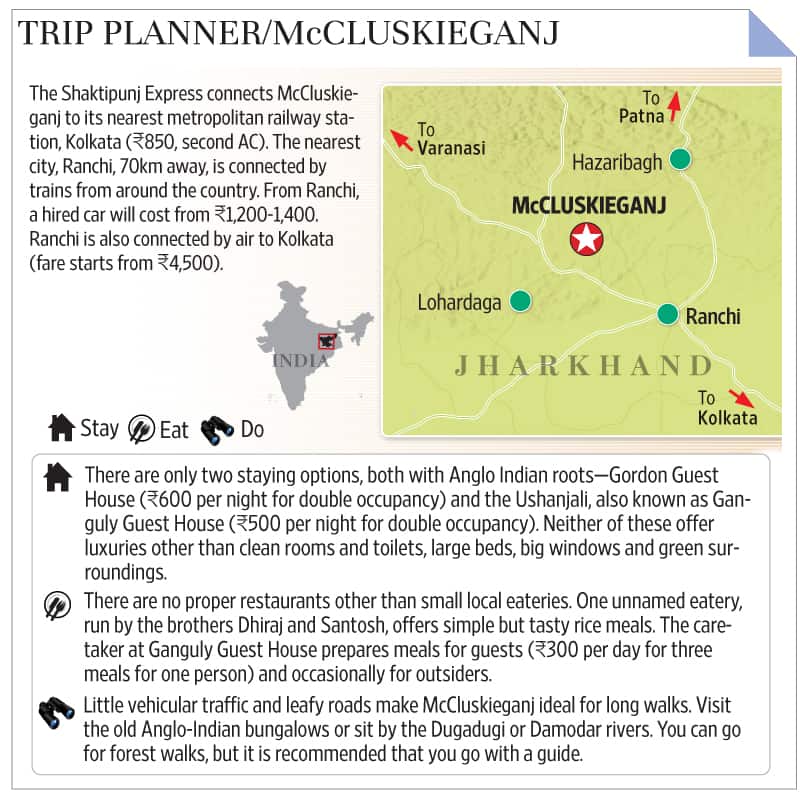