It’s all in the gut

A waist-hip ratio greater than 0.8 for women, and more than 1.0 for men, spells potential danger. Abdominal fat reflects visceral fat, or fat around our abdominal organs. This type of fat is distinct from the normal “subcutaneous" fat that is deposited below the skin, over other parts of the body—arms, legs, buttocks, breasts. 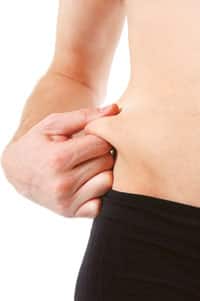 How does it happen?

“The reasons are not totally clear. It’s genetics to some extent," says Ambrish Mithal, senior consultant (endocrinology), Max Healthcare, New Delhi, adding, “In Indians, it’s also influenced by poor foetal nutrition followed by over-nutrition later." The nutritional influences in the womb, combined with diet and lack of exercise, lead to an expanding abdomen. A popular hypothesis is that stress could be a contributing factor. Stress increases levels of the “fight or flight" hormone called cortisol, which increases one’s appetite for carbohydrates and fats.

Why belly fat is bad news

The problem is, fat isn’t just inert, gooey, slippery lumps that pile on to the tummy. “Visceral fats around the abdomen secrete different hormones and are metabolically different," says Dr Mithal. These fat cells induce risks by two broad mechanisms: 1. By release of free fatty acids which prevent insulin from working properly, a condition known as “insulin resistance", especially in the liver. Insulin resistance in turn results in diabetes, and increased risk of heart disease. 2. They also release a range of hormones that modulate body functions. The mischief they can cause, in other words, can reach well beyond the abdominal region.

It’s not that easy to get rid of

This type of fat is stubborn and refuses to go away easily. Cutting calories apparently does not help much—one just grows thinner, but the bulge remains. Neither do sit-ups or other such “spot" exercises. They do give a flatter look to the belly, but that’s because sit-ups strengthen the abdominal muscle. These stronger muscles hold the fat better, but the fat content itself is not reduced. Some reports also suggest that liposuction may not be very effective because it does not remove the most dangerous types of fats, which cling on to the abdominal organs.

That leaves out most of the shortcuts. Some studies suggest that replacing carbohydrates in the diet with more protein is effective.

So, what can one do?

The best way to beat the big-belly blues, however, is the time-tested one: regular, moderate intensity exercise. Exercise, such as a regular 20-minute morning or evening walk three times a week, reduces the size of even these fat cells. Sometimes, complex problems do have simple solutions.

“Higher abdominal fat confers a greater risk of metabolic abnormalities such as diabetes and heart disease. In fact, it is one of the most important clinical predictors of such conditions."

“Central obesity is a major risk factor for health, and many studies have shown that South Asians have a greater tendency towards central obesity."

“Obesity, particularly abdominal obesity, increases the risk of all cancers, including breast cancer, by as much as 30-40%."