The new rallying cry on billboards around Delhi, and on online mailing lists and email forwards, is “Let’s do it! Delhi". It’s part of a campaign by a citizens group of the same name (LDID for short) to “clean up" Delhi in the run-up to the Commonwealth Games in October. The group, which organizes itself online, is reaching out to Delhi’s civic bodies to run campaigns to raise awareness and make Delhi a cleaner city.

LDID, which describes itself as a “collective effort by proud citizens of the city from varied backgrounds and professions", organized a fairly successful clean-up of Bhikaji Cama Place on 20 March—around 900 Delhiites turned up in white T-shirts and cleaning equipment to give the ageing building complex a thorough brush-up. Their next project, an admittedly more ambitious one, is to organize a city-wide “clean-up" on 26 September.

The campaign is inspired by a similar “Let’s do it! Estonia" volunteer effort where 50,000 citizens came together in Tallinn and other cities and towns across that country to clean up around 10,000 tonnes of garbage in less than 5 hours. Like the Estonia project, LDID is unique because of the way it’s organized—completely through Twitter, Facebook, and other online social networks—and its reliance on individuals to willingly spare their time and effort for the cause. 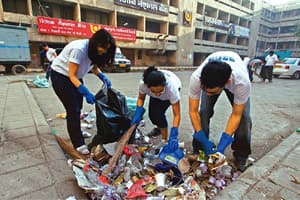 In the days of yore, organizing a real world event on the Internet was easy. The fancier among you built an Orkut community, and the traditionalists sent out emails to people. Today, the modus operandi of choice is a concentrated online blitz—involving Facebook, Twitter, blogs, wikis and forums.

LDID organizes itself on a Ning network. Ning is a platform that allows people to create their social networks centred around issues of interest to members. The network supports photos, events, blogs and maps, making it perfect for advocacy groups and communities looking to organize events in real life to collaborate and communicate. LDID has a neatly organized set of information pages, along with a discussion forum for users and members to post questions. Contact details are easy to find, making it painless for anyone wanting to jump in and join.

Facebook pages offer the same set of services, provided, of course, that all members have Facebook accounts. Facebook pages can have specified people as “administrators" who moderate the content on page, and event invites can be sent out to specific members, who can be reminded periodically through email and direct messages. Organizing through Twitter , while restricted to 140 characters, has the added advantage of being easily accessible on most mobile phones.

The I Fix project, on the other hand, uses a wiki—as made famous by Wikipedia, the free encyclopaedia. There are a number of services that offer hosted wikis, such as www.pbwiki.com . Wikis are freely editable dynamic pages, and a group of users can quickly pull together information as and when it is available. When organizing a meet, for example, I Fix merely put out a notice asking people to add their names to the list on the main page, which was editable by anyone. Wikis work for small, dedicated groups—but may be undermined by larger crowds who might not show the same amount of prudence.

Of course, the old fashioned methods are still just as valid—creating a Yahoo group ( groups.yahoo.com ) is a tried and trusted method of reaching a small group, as is creating a group blog on one of the many free blog-hosting services. But be it a tepid online presence or an all-of-the-above approach, there’s no denying that organizing through the Internet is more power to the people.