Home / Mint-lounge / On a bitter trail

A nondescript row of provision stores in New Delhi’s Lodhi Colony can be distinguished by the bittersweet aroma that envelops it. The culprit is a single source—one that other store owners know as the place author Arundhati Roy visits once a month, as do a sundry list of the city’s intellectual and artistic cognescenti, the likes of Upamanyu Chatterjee, Roshan Seth and Anjolie Ela Menon. It’s the only place in the Capital that sells fresh coffee—roasted, ground and packed on site. From bean to cup: Coffee varieties on display at Devan’s. Photo by Priyanka Parashar/Mint

According to New Delhi-based research and consultancy firm Technopak Advisors, around 1,000 of roughly 1,500 cafés in India have opened in the past five years. Meanwhile, international chains such as the UK’s Costa Coffee and Australia’s Gloria Jean’s have set up shop. By 2012, American coffee giants Starbucks and Dunkin’ Donuts will both enter the Indian market.

Dev believes his clientele will remain unchanged, though. “Cafés are mushrooming across the country because the young crowd needs a place to meet. We have no coffee culture to speak of," he says.

Across the country, closer to the coffee-growing south, Peter Philips of Philips Coffee & Tea, a 70-year-old Mumbai establishment, echoes this. “People come over all the time and complain that our coffee didn’t ‘mix’ well. They think all coffee is instant coffee!" What Philips does concede is that his customer base has widened. For a long time, it was only Mumbai’s large south Indian population, a few Parsis and diplomats, apart from hotels and restaurant chains. “Now, there are more locals...the curious ones."

Despite the brouhaha over Indian speciality coffees in the heavy coffee-drinking Scandinavian countries, India isn’t branded as coffee-literate. In The Devil’s Cup: A History of the World According to Coffee,a 2003 book that was translated into six languages, American author Stewart Lee Allen calls the instant coffee available in most parts of India a sickeningly sweet, piping-hot milkshake. He is particularly peeved by the addition of milk and calls Indian coffee “the world’s most consistently vile cup of joe!"

llen possibly never had a cup of Monsooned Malabar—India’s top-notch speciality coffee—during his travels. The heavy-bodied coffee has a musty, chocolatey aroma and notes of spices and nuts. It is called “monsooned" because it is exposed to monsoon winds, which make the beans swell and the coffee less acidic. 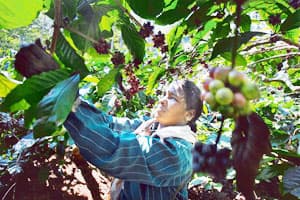 Coffee berries being plucked at a plantation in Kodagu. Photo by Prashanth Vishwanathan/Bloomberg

In 1972, after repeated complaints of a quality drop, the Coffee Board of India, which is run by the Union ministry of commerce and industry, developed a process to replicate these natural “monsooning" conditions. Coffee beans were exposed to the monsoon winds in season—from June through September—in the port city of Mangalore.

Sunalini Menon, founder and CEO of Coffeelabs Pvt. Ltd, a Bangalore-based coffee consulting firm, calls this move a pioneering effort for the Coffee Board. “When they went for this ‘branding’, the world was yet to discover speciality coffees. It was far before gourmet varieties such as Colombian Supremo were coined," says Menon.

Today, Monsooned Malabar has something in common with champagne. In 2008, it acquired a Geographical Indication (GI) tag, which is awarded to products that have characteristics traceable to a particular region. Less than 160 products have this distinction in India, some others being Darjeeling Tea and Banarasi brocade.

But as a coffee drinker in India, rarely does one get a taste of the best. Almost all of what a premium estate such as the Athikan Estate in BR Hills in Karnataka produces, is exported. Coffee beans from the 130-year-old estate won the “Best Arabica" award in Flavour of India—Cupping Competition 2011, an annual event conducted by the Coffee Board to boost planter quality. S. Appadurai, who owns Athikan, sells his green coffee beans via weekly auctions to coffee-roasting companies around the world. Prices average Rs260 a kilogram. This year’s harvest, for instance, went to the US, Australia and Korea.

While around 80% of the coffee produced in India is exported, almost all of its prized Monsooned Malabar goes out of the country. “There is no taste or demand for it here," says Menon.

Meanwhile, India’s coffee trade is growing at a phenomenal pace. From being the sixth largest exporter of coffee between August 2009 and July 2010, India became the third largest in July this year, trumped only by Brazil and Vietnam. The story goes that it was introduced in 1670 AD by a Sufi saint on his return from Mecca. The Arabs, who had started cultivating coffee in the 15th century, had imposed a ban on the export of fertile coffee beans, but the Sufi saint had been able to carry seven seeds back.

Due to its early development of plantations, Chikmagulur continues to take the top spot as India’s coffee centre. It even hosts the laboratories of the Central Coffee Research Institute and a coffee museum.

India does have a strangely wrought relationship with coffee. The International Coffee Organization, a London-based inter-governmental body, acknowledges that India was the first place that coffee was cultivated outside the Arab peninsula (well before tea was introduced in the 1820s). Still, general awareness about coffee is low—only a few outside of trade circles would even know of the Monsooned Malabar. 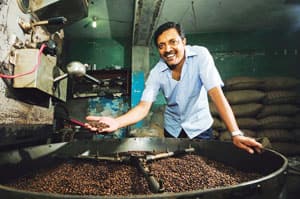 The perfect brew: Keshav Dev with his coffee roaster. Photo by Priyanka Parashar/Mint

Menon believes Indian coffee is especially flavourful because it is shade-grown, unlike other parts of the world. In Kodagu in Karnataka, plantation owners grow intercrops such as guava, jackfruit, cardamom and pepper. The fruits and spices planted alongside coffee bushes lend an incomparable flavour to the coffee bean. Wine drinkers would be better equipped to discern these nuances. The description of flavour notes—terms like fruit finish, bouquet, spice notes—borrows from the vocabulary of wine.

Indian coffee growers are only now capitalizing on these nuances. With the Union government managing the coffee trade till the liberalization of the Indian economy in the 1990s, there were no incentives for farmers to improve quality or individually brand coffees. A majority of what was produced was exported as low-quality “filler" coffee, while the better coffees were being used in blends by companies such as the Italian gourmet coffee brand Illy—without ever being branded as “Indian".

Initiatives such as the Araku Valley Coffee Project of the Naandi Foundation, an autonomous public trust with interests in fair trade and development, are striving to change this status quo. Manoj Kumar, CEO, Naandi Foundation, says their project started out with 1,000 tribal farmers in 2001 and has empowered 15,000 farmers today to grow and market organic coffee in Andhra Pradesh’s Araku Valley. Hogg explains that India’s regional differences—soils, climatic conditions and the variety of shade trees—have the potential to produce a range of nuanced speciality coffees. “Indian coffee has huge advantages in its favour if it is grown the right way. It won’t be long before we have GI tags for many. Let Vietnam mass-produce filler coffees...for India, the future lies in quality," says Hogg.

Jennifer Murray, an international cupping expert who was a jury member for the June edition of Gems of Araku, believes Indians coffees will be making a strong statement in years to come. Murray herself purchased a sizeable amount of Araku’s 2010-11 crop for Five Senses, an Australian roastery. “I think we have only seen the tip of the iceberg of what India has to offer," she says. “The real challenge," according to Murray, “is to overcome the years of low-quality coffees that have been exported and made available internationally. It’s tainted the reputation of Indian coffee in the speciality market."

A robust marketing campaign has to be an integral part of India’s ascent to the gourmet coffee league. In the 1980s, the Brazilian government invested close to $25 million (around Rs117.5 crore now) to publicize Brazilian coffee both domestically and internationally. “Brazil is a world leader but 40% of its coffee is consumed domestically," explains Hogg. “India needs to develop its domestic demand. Quality will follow." 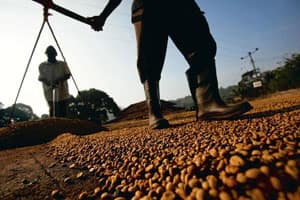 At Devan’s too, Dev will soon introduce Brazilian, Colombian and decaffeinated coffee because customers have been making inquiries. At least three more international coffee chains are set to enter the Indian market by 2015: London’s Coffee Republic, Australia’s The Coffee Club and France’s Alto Coffee.

Last month, the North Eastern Tea Association urged the Union government to declare tea the country’s national drink. Now more than ever before, coffee needs to stand its ground.