Keys to the development puzzle

Keys to the development puzzle

It took 108 hours of hunger in the Iron Curtain era for N.R. Narayana Murthy to lose whatever affinity he once had for Communist thought. Hitchhiking from Paris to Mysore in 1974, the co-founder of Infosys Technologies Ltd was on the Sofia Express from a border town called Nis, between then Yugoslavia (now Serbia) and Bulgaria, when he was dragged away by policemen. They threw him into an 8ftx8ft cell with a cold stone floor and a hole in the corner for a toilet.

Murthy’s crime was that he had struck up a conversation in French with a co-traveller, a young woman. Someone in the same railway car complained to the police that Murthy and the young woman had been criticizing Bulgaria’s Communist government. Murthy narrated this experience in a lecture he delivered at the Stern School of Business at New York University on 9 May 2007—one of the 38 speeches, out of the 150 or so that he has delivered over the last few years, that find space in A Better India—A Better World, a collection launched recently by Allen Lane. Only those closest to him, or those who have heard the speech earlier, could have known of the experience that was seminal to the making of Murthy the entrepreneur, and the birth of Infosys in 1981.

There are several riveting anecdotes in the speeches that articulate Murthy’s deepest concerns and the values ingrained in Infosys and Infocians—including one about a meeting that five of the seven co-founders had in the winter of 1990 to discuss the possible sale of Infosys for an “enticing sum of $1 million (around Rs5 crore now)".

Classified under 10 subheads, the themes in the book range from the role of religion in education to urban planning, corporate governance, corruption and globalization. Murthy, now 62 and the non-executive chairman and chief mentor of Bangalore-based Infosys, took three years to compile the collection, delaying its publication by a few months to let fellow Infocian and co-founder Nandan Nilekani come out with his own book first.

“I talk about three pieces of the development puzzle," Murthy told Lounge, four days before the book launch. “The first is values like work ethic, honesty, discipline, pro-action, secularism, putting the interests of the nation ahead of personal interest.

“The second is leadership that espouses these values, serves as a role model for people and demonstrates leadership by example. The third is the attitude of the elite and the powerful in society to eschew any asymmetry of benefits in their favour vis-á-vis the common man." 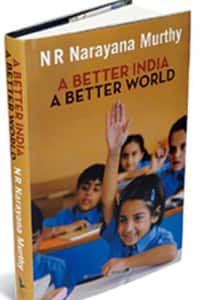 Murthy says the timing of the book’s publication had no special significance.

He chose 20 April because that was the only day that Prime Minister Manmohan Singh—whom he admires as “an extraordinary individual who has brought values to our public life"—had time to spare for the book release amid the general election. “In a sense, the release of the book may be somewhat late because by the time people read it, think about it, assimilate it and then go out and exercise their judgement, the election may be over," he says.

There has been speculation in the past about Murthy’s political ambitions—he was said to have been interested in succeeding A.P.J. Abdul Kalam as president. “I believe that given the demographics of our country, given the kind of challenges our society has, given the kind of commitment of energy, enthusiasm and hard work we need to bring about a kind of transformation, we have to emphasize the importance of youth in our society. Because of that I also feel that maybe it is not the right time to enter politics," he says.

Murthy now travels a lot and is no longer involved in the day-to-day running of Infosys. He participates only in strategic discussions and is in the office between 8.30am and 6.30pm. He says he has no personal ambition left to fulfil and prefers to talk and think only about national goals.

“The Satyam incident demonstrates the need for creating an open, enlightened and participatory democracy in a corporation where no individual is afraid of whistle-blowing, standing up and pointing out that things are not being done as they should be. It demonstrates that there is no place for fostering feudalism in today’s corporations."

Challenges before the next government

“The next government will have to straddle the multiple worlds that India is made up of—the rich and the poor, the urban and the rural, the educated and the not-so-educated. They have to accelerate economic growth and ensure that growth is shared by both rural and urban India. They will have to focus on the efficient use of tax resources to provide basic education, basic healthcare, basic nutrition and basic shelter to every Indian citizen."

“What we have seen is a global phenomenon. Kris (Infosys CEO S. Gopalakrishnan) and his colleagues have mounted many innovative programmes to leverage the power of our IP (intellectual property), to communicate better business values and prospects in every project we do, programmes to enhance our work productivity, to leverage the power of Infosys Consulting and Infosys BPO. It is likely that it (downturn) will continue for another 12 months."