Binny Bansal | The flip side of an e-venture

Binny Bansal | The flip side of an e-venture

We are at The Oberoi in Bangalore and the previous night’s rain has brought to life the garden overlooking the lobby. It also seems to have energized the 28-year-old man I am sitting with.

Binny Bansal, COO and co-founder of Flipkart, initially comes across as shy and reserved. Clad in a T-shirt and a pair of denims, Bansal is far removed from the suit-and-tie image I had of the chief operating officer of a company whose 2010-11 turnover was Rs75 crore. But Bansal’s online retailing company is somewhat like him and its co-founder Sachin Bansal (not related to Binny)—there is more to the duo than their unassuming and low-profile public personae. 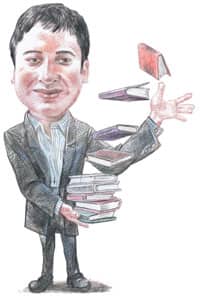 “We were clear from the beginning that the focus of our firm would be totally customer-oriented while having a strong technological base." Since that first customer (who went to order at least 50 more books in the coming months), there has been no looking back.

Both the Bansals did their software programming from the Indian Institute of Technology (IIT), Delhi. Before getting into the “technology of selling books", Binny Bansal joined the US-based Sarnoff Corp., a firm that is into high-end automation projects for the defence and automobile industries, in Bangalore in 2005. In the year and a half he spent there, Bansal developed a lane sensor for cars—a mechanism enabling a camera in the car to detect road lanes. If the driver moved from one lane to the other without giving a signal, it would beep automatically. “There are lots of accidents in the West when people doze off on long drives and unconsciously move lanes. I was always into cool technology and working on this was fun."

Today, Bansal has no qualms about being described as India’s Amazon.com. “Our vision was always to be the Amazon of India," he says. Flipkart has around 10 millions books on its catalogue across different genres and is now moving into selling other products such as music and movie CDs, electronic goods, computers and peripherals. Every month it gets about six million visitors online.

Both the Bansals have worked for Amazon in the past. Sachin joined Amazon in January 2006, followed by Bansal in January 2007. Both quit in September 2007. “While at Amazon, we realized we should do something on our own since the scope for e-commerce was huge," Bansal says, emphasizing: “I never wanted to go abroad unlike most IITians. I wanted to be in India but create something on the Internet using technology that we can create at home, hoard up and make millions of dollars."

However, in late 2007, soon after the company’s launch, it still seemed a risk. “We were lucky since neither of us was married and didn’t have much family responsibility. Sachin and I put in Rs2.5 lakh each and started with seed money of Rs5 lakh." Flipkart, headquartered in Bangalore, now has around 120 employees. Initially, few distributors or publishers took them seriously. So what has been the key to the company’s sudden rise? From a turnover of a few lakhs in the first year (2007-08) to Rs2.5 crore the next (2008-09), Rs25 crore in 2009-10 and Rs75 crore now (2010-11)—what was the real catalyst? “We needed to build a slick website that was fast, and where the discovery of the product was easy. Also, the payment delivery systems had to be easy and smooth," says Bansal.

An important change took place around 2010: the payment mechanism. It’s a feature of Flipkart’s model that is distinct from Amazon’s.

“We looked at how Chinese companies—where e-commerce is huge—did retail online. The US has an established credit card culture, while China (like India) is a cash-based economy with lesser credit card penetration. So looking at e-commerce models in China, we put in place a cash-on-delivery system." Today, more than 50% of their orders operate on a cash-on-delivery basis, Bansal says. Most importantly, on nearly each book a consumer buys through Flipkart, the price is “15-35%" cheaper than the cover price.

Though Bansal says Flipkart has transported books to “nearly every pin code in India, and definitely every pin code in Kerala", 50% of their orders come from the metros: Mumbai, Bangalore, Delhi, Chennai, Kolkata and Hyderabad. The remaining buyers are from other parts of the country. Each day, Flipkart ships 1,000-odd items “through the government book post as so many villages don’t have courier facilities". According to Bansal, the most saleable categories are fiction, trade paperbacks and Indian writers. More than 60% of Flipkart’s customers are working males between the ages of 25 and 35.

With the iPad and the Kindle, what is the future of books and booksellers such as Flipkart? Bansal thinks e-books are advantageous for outfits such as theirs. “It depends on which economies we speak of. In growth terms, India will be behind the West by four-five years when it comes to e-books. The projection for the US is that 50% of books will be e-books by 2015. In India, it will be by 2018 or 2020, not before that." He says the demand for the normal paperback or hardcover is still high in India. “The e-format will dominate in India too, but not before the entire structure for it to take off has been set up," he says.

The distribution model for e-books is online, so that’s a transition Bansal is waiting for.