Isn’t it strange that just this time last year, tennis observers (Mint included) were touting Rafael Nadal as the greatest challenger to Roger Federer’s position as the greatest of all time? Nadal headed into the end of last year with three Grand Slam titles, becoming just the seventh player in men’s history to win all four Grand Slams in a career, and winning 71 matches through the year (the most in 2010).

The inclusion of both players in the list of all-time greats is not in question, but in the intervening period another strong challenger has emerged.

This year, Nadal has been a distant second, but not to Federer. Nadal lost all of his six matches, including the Wimbledon and US Open finals, to world No. 1 Novak Djokovic. As the top eight men’s singles players prepare to slug it out at the season-ending Barclays ATP World Tour Finals (WTF) at the O2 arena in London from Sunday, one thing is clear: The two-man domination has just turned into a three-way contest. 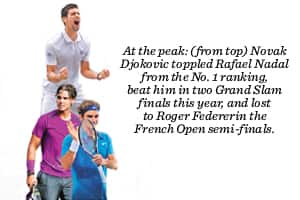 Djokovic has earned his victories the hard way. According to ATPWorldTour.com, of the 10 titles he has won in 2011, nine came after beating a top-10 ranked player in a final. He’s enjoyed a total of 20 wins this year over top 10 opponents, and lost only two. The only player with more wins over top 10 players in a year was the former world No. 1 from Czechoslovakia, Ivan Lendl (22 wins in 1985).

In an honest assessment that Nadal gave of his game and his rivalry with Djokovic to a packed press conference after losing the Wimbledon final in July, it was clear that he had finally come across a player who had started dominating him, mentally especially. Djokovic was to Nadal what Nadal had been to Federer.

A Davis Cup victory for Serbia, a modified diet, and subtle improvements in his game have propelled Djokovic to the top of men’s tennis this year. From the time he won the year’s first Grand Slam, the Australian Open, in January, Djokovic went unbeaten for 41 straight matches (43, going back to last year’s Davis Cup final) till he was defeated by Federer at the French Open semi-finals in May. Only former tennis great American John McEnroe had a better start to a season when he won 42 consecutive matches in 1984.

Setting aside that minor setback, Djokovic bounced back at Wimbledon, winning his first title at the All England Club, beating Nadal, and claiming the world’s top ranking. His serve was one of his biggest improvements. So far this year, he has won 74% of his first serve points, up from 71% the previous year. He won 56% of his second serve points, up from 52% last year. His earnings so far this year, $10,779,803 (Rs 54.87 crore), are an all-time men’s record in season prize money, according to ATPWorldTour.com data.

Just a month short of turning 30, Mardy Fish—the new No. 1 American player—makes his debut at this year’s Barclays ATP WTF. His best performance of the year came in the American hard court season leading up to the US Open where he appeared in three finals in a row (Atlanta, Los Angeles and Canada). At the US Open, he lost a tough five-set match to Frenchman Jo-Wilfried Tsonga. In July, he won 20 of his 26 matches. 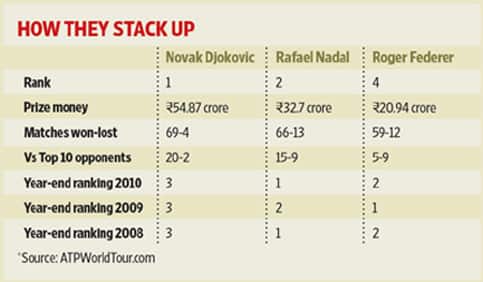 “I realized that if I could shed some extra weight, it would make a huge difference to my knees. My diet wasn’t terrible but it wasn’t great either. We cleaned up my diet and did a better job of timing my meals throughout the day," Fish said in an interview to Men’s Health magazine in September.

He may not make much of a dent at this year’s WTF, given that he retired from his last two events (the third round in Paris in November and the first round in Basel, Switzerland, in October) on account of a hamstring injury, but in the absence of WTF regular Roddick, Fish will aim to keep the American flag flying in London.

Entering the event ranked No. 4 in the world will be Federer’s lowest year-end ranking since 2002, when he finished at No. 6. Federer will end the season without a Grand Slam title for the first time since 2002. He also joined the 30s club in August. “Birthdays happen. They’re part of life. I’m happy I’m getting older. I’d rather be 30 than 20, to be honest. To me it’s a nice time," he told reporters back then.

Clearly, Federer’s days of domination are in the past. His wins may not come with as much intensity as they did before, but Federer’s last two titles ought to boost his confidence. After taking six weeks off, he won in front of his home crowd at Basel, and on 6 November, he won the BNP Paribas Masters (an ATP 1000 Masters event; the second highest level of tournaments on the men’s circuit) in Paris for the first time. “I couldn’t be more confident (going into the Barclays ATP WTF)," said Federer at a courtside interview minutes after winning the Paris title.

The Barclays ATP WTF is a round-robin event. The top eight players in the world who qualify are divided into two groups (Group A and Group B). All the players play three round-robin matches against rivals in their group. The top two players from both groups advance to the knockout stage (semi-finals). This year, Nadal and Federer are placed in the same group, so they will also play one match in the round-robin stage itself, apart from the finals, if they get that far.

But the man to watch, as has been the case this year, will be Djokovic. Another title, this time in a vacuum-sealed field of eight, will only reinforce what we already know—the Serbian is currently the world’s best male tennis player.