Home / Mint-lounge / My own food diary
Back
Share Via

My own food diary

My own food diary

Have you ever heard of these?

What do families do when they can’t leave home? You know, when people are coming over; when you decide to lounge around and read or watch television; when you’re house-bound because of a bandh, a riot, a flood, an election or anything similarly disruptive of Indian public order; or when it’s simply too hot or rainy. We cook. When we have time on our hands, we inevitably gravitate towards the kitchen. Of course, we watch the occasional movie, we are avid walkers, but give us an extra hour or two at home and we whip out pots, pans and ladles.

As you might imagine, we do a lot of impromptu cooking. And when you cook on the fly, you tend to innovate and invent. The surprising thing is that disasters have been fewer than few. I guess if you lavish attention and passion on your kitchen, things seldom go wrong. But if your kitchen inspiration is born on the spur of the moment and ends up being a dash of this and that, can you remember what you did last Friday?

Our solution: A family kitchen diary.

There are no grandmother’s recipes here. There’s nothing from the Coromandel or Croatia, from Tuscany or Tamil Nadu. Instead, you’ll find some oddly named entrées, such as the ones I mentioned at the start of this column. 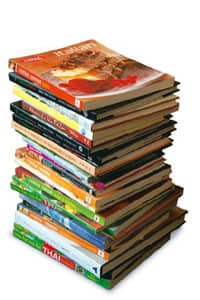 I’ve been re-reading the kitchen diary recently and honestly I don’t remember many situations and many recipes. However, I do remember some, helped by the two-line notations that many entries have on the circumstances of their creation.

Here’s one: Bank Roast Chicken. This seems to have been made on 17 January 2004, as part of a meal I cooked for 33 people—bankers and their spouses—after my services were requisitioned in a brave moment by my cousin. I remember taking two days off from work, trawling markets for ingredients and working my tail bone off. And in all modesty, it was good—many of them asked if I would cater for dinners.

My favourite is the notation for Massacre Prawns: “The day our bowling was massacred 359/4 vs Aus." Doubtless, cricket fans might remember this day of ignominy. I don’t.

Mohammad’s Fish entry on 20 March 2003, reads: “Macchiwala Mohammad’s first fish—a succulent pomfret delivered directly to our doorstep." Mohammad was a mild, taciturn Bihari who was a step ahead of Mumbai’s traditional fisherwoman: You could call him on his cellphone and he landed up on your doorstep with fresh fish. He even cleaned and cut it for you in your kitchen. Unsurprisingly, his ilk—the bhaiya fish-delivery men who had grabbed business in south Mumbai homes—have had to face the ire, attacks even, from the local sons of the sea. I still have his number (9820951168).

As you can see, a kitchen diary isn’t just useful, it can also be a historical record of your life and the times you’re living through. And if you’re wondering about the Fighting Chicken, it appears my wife and I had had a raging argument. There’s no notation, and we don’t remember. Some things are best forgotten.

Here’s a recipe from my kitchen diary. There are more on my blog http://blogs.hindustantimes.com/my-daily-bread/

Dry roast all the spices in a pan and as they start to pop and release an aroma, take off the flame. Pound the spices roughly in a mortar or dry grind in a mixie. Take the chicken (with its skin on) and poke the surface with a fork or toothpick. Apply the spices on the chicken and then sprinkle it with rice-wine vinegar and whiskey (preferably Jack Daniels). Rub the spices and liquids well inside the chicken and under the skin. Keep aside some of the masala, mix this with olive oil and use for basting. Roast at 175 degrees Celsius for 2 hours, turning and basting intermittently.

Samar Halarnkar writes the blog My Daily Bread on htblogs.com. He is managing editor of the Hindustan Times. Write to Samar at ourdailybread@livemint.com