In June 2002, a young Pakistani-Hindu-Dalit boy and his father were arrested for accidentally crossing the border into India. That incident became the basis for Pakistani director Mehreen Jabbar’s debut feature film, Ramchand Pakistani, which sets out to explore the tenuous and fraught relationship between the two countries through two very ordinary protagonists. 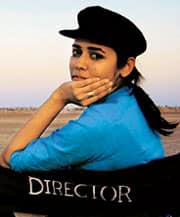 Why did you choose this story for your debut feature movie?

The story of Ramchand Pakistani was discovered by my father Javed Jabbar, who is also the producer of the film. During one of his visits to the Tharparkar desert region, where he has an NGO that has been working there for over two decades, he met this father and son, who had just returned after spending some years in an Indian jail. After having extensive meetings with them, he wrote a synopsis of the story and showed it to me. The simplicity of the story, as well as the layered nuances, and the political, religious context of the story gripped me. I felt it was a very powerful story, told not in a propagandist way but in a very real and human manner.

What prompted your decision to cast an Indian actor (Nandita Das) in one of the lead roles?

The primary reason was that she fit the character. As we were developing Champa’s role, it became more and more apparent that Nandita was the right choice. She also helped a lot in fleshing out that character during the scripting stage. Another reason is that since we’ve known each other for many years, we wanted to work together because of the comfort level and a shared vision of the kind of cinema we both like. Third, since the film is about India and Pakistan, I wanted her contribution in it. Whereas all the other actors are from Pakistan—from TV, theatre, etc.—Nandita is the sole Indian actor.

Did you meet any of the prisoners who were caught under similar circumstances?

We had many meetings with the actual father and son who were held prisoners in Bhuj. In fact, they were present during the entire length of the shoot, especially during the jail scenes, so we could verify anything we wanted to.

How was it working on such a sensitive issue? Did you face any problems while producing the film?

Actually, the issue itself was not a problem at all, and neither were the governments of Pakistan and India. The problems that we encountered were mainly those that any other independent film would face, especially in Pakistan where the film industry has been in a decline for many years.

Ramchand Pakistani will release across the country on 29 August.