Review: HTC One X9 is more desirable than you may imagine

HTC One X9 may disappoint you on the spec sheet, but the precise user experience is exactly what you should look for when buying a smartphone HTC is one of the few smartphone brands that pretty much always got the design aspects of their phones spot on. The latest in line is the HTC One X9 ( ₹ 25,990), which is the company’s most affordable phone with a metal body. But the question remains whether the One X9 can build on the cool looks? The phone goes up against the Xiaomi Mi5, which is available for ₹ 24,999 The One X9’s unibody metal finish looks and feels as good as some of its premium flagship devices in the One M series. Despite the all-metal exterior, the phone weighs a manageable 175g. The metal adds to the phone’s robustness. The factors that contribute most to the grip quality here are the chamfered edges along the side panel and non-slippery metal back. One of the key highlights of the phone’s design is its punchy front-facing speakers, powered by HTC Boomsound technology, and the mid-position of the volume keys where they are easily reachable. The one big let-down is the plastic flap covers meant to protect the card slots. We missed the fingerprint scanner, which is now commonly available in smartphones of less than ₹ 10,000 these days. The 5.5-inch LCD panel comes with a screen resolution of 1920x1080p. The navigation keys are placed outside the screen which means users will have access to a slightly bigger canvas compared to phones where the keys are integrated within the interface. HTC hasn’t tried to exaggerate colours. The colours look accurate and true to natural shades. The text looks crisp which makes reading along fun. The wide viewing angles are top-notch, which makes gaming and watching movies a flawless experience.

One of the notable attributes of the display is the colour temperature mode which lets you change the tint of the screen according to your comfort level. A big let-down is the reflective nature of the screen which affects visibility under direct sunlight. 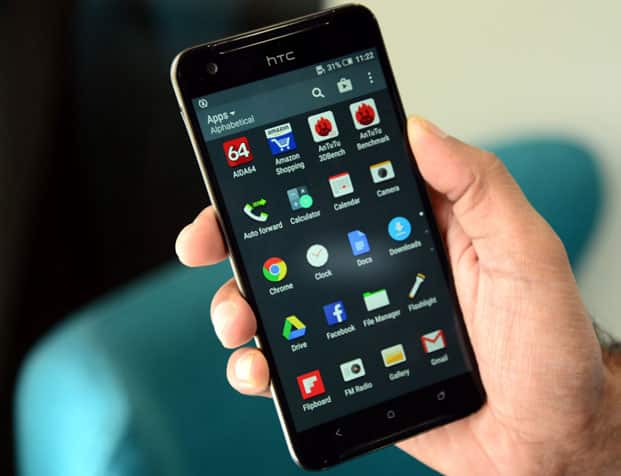 HTC seems to have embraced the latest version of Android after a long wait. All its recent smartphone including the flagship HTC 10 run on Android Marshmallow (6.0) out of the box with HTC proprietary custom UI called Sense 7.

The UI looks clean and easily understandable even for a first-time user. Some of the key highlights of the UI are the social media and news aggregator Blinkfeed, the Sense Home widget which identifies your work apps from your personal apps and change them automatically according to your location. Then there is the cool video editor tool Zoe and the HTC theme store.

What lies inside the metal exterior is a MediaTek Helio X10 octa-core processor, which drives several budget smartphones. However, paired with 3GB RAM, the processor doesn’t seem out of place even in the more expensive price segment. It was smooth while switching apps, or even when we had multiple apps open. We played out some graphic-heavy games such as FIFA 16 and GT Racing 2 and it handled them without any hassle. We did notice the phone’s spines heat up a bit while playing games, but there was nothing alarming.

The HTC One X9 has 32GB internal storage and allows another 128GB through a micro SD card. Like all recent HTC phones, this is also a dual SIM device but supports all 4G networks. The phone’s 3,000mah battery lasts a whole day easily on moderate to heavy use, which is acceptable for a big screen phone. HTC has the extreme saver mode in the One X9, which can really come in handy when your battery is almost on the verge of raining out completely as it switches off all apps except the phone app, messages, mail, calculator and calendar, and makes the screen monochrome. Camera: Consistent in all conditions

While the camera is only a 13-megapixel affair, the picture quality is brilliant. During daytime, in all the shots we took the colours look rich and the detailing is impressive. The only niggle is that the camera doesn’t feel very responsive at times by taking a little while to open up or in locking focus. Surprisingly, the low light or night shots look better and more colour-accurate than many mid-range smartphones.

The OneX9 looks more expensive than its predecessors in the Desire series due to the metal exterior. The fact that the performance is genuinely good makes this an even more enticing option. The fact that it lacks the faster USB Type-C port or a fingerprint sensor may not entirely be a turn off for a lot of users.