Master ventriloquist Paul Zerdin’s artistry in portraying a trio of very different co-stars, who are as contrary and unmanageable as they can possibly get, is amazing. His India tour has been organized by comic Papa CJ, who will also be performing in the show. This is the first of a series called Papa CJ and Friends, which will continue into next year.

Sovan Kumar’s show about transition and transformation is dedicated to trucks. The inspiration for this series, as the exhibition note says, was the lines of trucks that Kumar saw pass through his village in Orissa. For him, a truck isn’t just a cumbersome, noisy machine that takes up too much space on the road, it’s a metaphor for change or, more specifically, something that heralds change.

Illustration of Life and Flatland—A Landscape of Punjab Back to the roots: A picture of Punjab by Max Kandhola.

A sarod and sursringar recital by Banerjee, who is a disciple of Dhyanesh Khan, Aashish Khan, Bahadur Khan, Nikhil Banerjee and Ustad Ali Akbar Khan. It is part of the HCL Concert Series.

Z3 Shirts and Rolling Stone magazine present a salute to Deep Purple, one of the pioneers of hard rock and heavy metal. Hosted by Luke Kenny, the tribute tour’s gig features Crimson, which comprises Gaurav Balani and Aditi Singh Sharma.

They will be joined by Parikrama percussionist Dilip Ramachandran, Prabir Sekhri (of Blue Breakfast and Drift) on the keyboard, Vasav Vashisht (vocalist of Prestorika), Robin Mathew (vocalist of Five8) and guitarist Bhaskar Gurung of True Colours.

F Bar and Lounge, The Ashok hotel, Chanakyapuri, entrance from Niti Marg (26111066). For entry charges and timings, call the venue.

M. Sayeed Alam is finally giving his many plays on Ghalib a break. Instead, this tongue-in-cheek comedy on the trials and tribulations of staging a play returns this fortnight. J.K. (Harish Chhabra, in an over-the-top yet somehow effective performance), a harassed and hot-tempered director, is trying very hard to get his bunch of actors to, well, act. A week before the performance, the play seems to be doomed—everything that could go wrong does. Problems keep popping up during rehearsals and various mishaps and mix-ups take place backstage, setting the stage for some genuine laughs.

At one point, the lead actor leaves for his “big Bollywood break" and a hapless chowkidar (watchman) is forced to fill in for him. Two other actors fall in love during the rehearsals, further complicating matters. Yet another actor is an annoying know-it-all (played to great effect by Alam), who constantly interrupts the director with his opinion on everything and everyone. Script and director, M. Sayeed Alam.

The much anticipated branch of London’s Comedy Store opens in Mumbai this December. Flying out from the UK are three very fine acts, opening in Delhi and travelling to other cities. Jeff Innocent is a fantastic old-school comic who has been on the English circuit for many years, successfully bringing tears to the eyes of audiences.

Jarred Christmas is one of many comedians from New Zealand who have brought their own style of freewheeling, quickfire storytelling funniness to London. Watching him is like gulping down huge mouthfuls of Red Bull. Phil Nichols, though born in Scotland, is a Canadian comedian, actor and singer-songwriter who first became famous as a member of cult musical group Corky and the Juice Pigs.

The Girni Kamgar Sangharsh Samiti celebrates its 20th anniversary. Writer Arundhati Roy, social activist Pushpa Bhave and Mahanagar newspaper’s editor Nikhil Wagle will be the chief guests. The programme will include a felicitation of the chief supporters and artists who were part of the mill workers’ struggle. 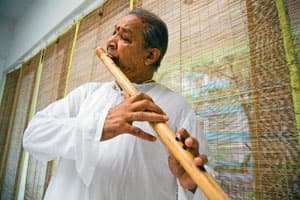 Despite the title, Preksha Tater is not related to the robotic Vicky from the 1980s’ soap. She makes works using a variety of devices such as handwriting and embroidery. Tater attracted curator Anne Maniglier’s eye with her cut-outs and collages.

Lift to the Scaffold

Louis Malle’s first feature is a straightforward, but classy thriller about an ex-paratrooper’s attempt to dispose of his mistress’ tycoon husband in a perfect murder. The ingenious plot, using a malfunctioning lift as its deus ex machina, has one carefully plotted murder conjure another as its shadow image. But the cement holding the film together is the splendid jazz score improvised by Miles Davis.

Ayussinte Pusthakam: The Book of Life is set in a small village in Kerala and explores the idea of family, priesthood, sex and marriage through the knotty relationships of a grandfather, his son and grandson.

The characters include a guilt-ridden patriarch who hangs himself, a young priest who escapes the suffocating atmosphere of a seminary by eloping, a beautiful woman who is scared of sex and is married to an invalid, and a young man in search of a mother figure.

Five artists, spanning three generations of the Choyal family from Udaipur, are holding an exhibition of paintings.

C.V. Chandrasekhar, a Chennai-based Bharatanatyam dancer, will present a varnam (a histrionic piece) and an ashtapadi (a song depicting love and devotion) from the traditional margam of Bharatanatyam. 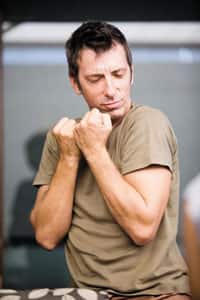 Chris Lechner, a German movement artist and Sunitha M.R., a theatre practitioner, will use text from the plays of British playwright Sarah Kane in their solo performances. Later, they will improvise as a duo.

Hosted by Alliance Française de Bangalore, the festival is presenting seven debut films of young and upcoming French directors. The screenings will include English subtitles.

The Goethe-Institut/Max Mueller Bhavan is hosting a festival of four contemporary films based on the theme of youngsters sticking together as friends against all odds. All films will be screened with English subtitles. Emil & the Detectives opens on 6 October at 4pm; Das fliegende Klassenzimmer (The Flying Classroom) screens on 7 October at 4pm; and Die wilden Hühner und die Liebe (Wild Chicks in Love) screens on 8 October at 4pm.

Pictures of monsoon-washed colonial ruins from Belgaum by Rahul Deshpande.

The other series that he’s showing is based in Kenya in a village called Bombo, near Mombasa, where he’d been on vacation.

This fortnight, audiences get to see two pieces from Motley’s repertoire as the group continues to celebrate its 30th year together.

DakshinaChitra is organizing a card modelling workshop, where children will learn how to create 3D objects from paper.

Card modelling is the art of building scale models of aircraft, buildings, ships and other real life objects.

The Madras Terrace House is presenting a repertoire of paintings, drawings and etchings by Asma Menon.

Known for her use of vivid colours and attention to detail, Menon will showcase black and white works along with acrylics on canvas.

Faces that are Lined with Stories Alliance Française de Madras is organizing an exhibition of photographs by Karthick Ramalingam, a young photographer who specializes in portrait photography.

He is presenting a collection of portraits of elderly people. Ramalingam, who hails from Tanjore, is a software professional with a passion for photography. His creations are driven by the ordinary, everyday walks of life, capturing that one singular moment which could change the way we see things, things that we usually ignore and move on.

Lalit Kala Akademi is organizing a photography exhibition by students of the Light and Life Academy, one of the premier photography institutes in Asia.

Film-maker K.V. Anand will inaugurate the exhibition. At least 200 images created by 40 students will be showcased. The exhibition will serve as a platform for the students to interact with people in the field of photography, advertising and marketing, apart from buyers and photography enthusiasts. 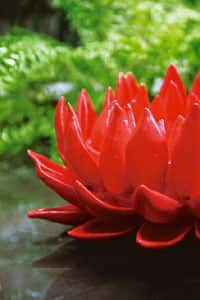 Weavers Studio Centre for the Arts presents ‘Romancing the Clay with the Five Elements’, a unique ceramic exhibition by Aanupamaa G. Jalan. The inauguration will feature celebrated danseuse Priti Patel, whose performance will bring alive the five elements: earth, water, ether, air and fire, all of which contribute to the aesthetics of ceramic.

Behera’s works are landscapes inspired by real places: the Ajanta caves, the mountains and monasteries of Ladakh, the countryside of Orissa and even the interior of the artist’s home. The works employ distorted perspectives and folds to become more like hallucinatory visions. While their palette of colours is realistic, the spatial dimensions certainly are not.

A woman past her middle-age, who seems to remember nothing of her past (though the title of the play suggests, perhaps, a deliberate disguise), a young woman, newly married yet lonely, her husband, his life dominated by fears and apprehensions—these are the key characters of the play, which revolves around (fading) memory and its tenuous hold on identity.

Music Down the Corridor

The Eastern Zonal Cultural Centre (EZCC), ministry of culture, presents a series of colourful folk dances: Thang-ta from Manipur, Chari from Rajasthan and Harul from Uttarakhand.

Young Audiences East India, in association with St James’ School, presents a series of workshops on teamwork and personal effectiveness, effective communication skills, mentoring and negotiation skills. The workshops have been designed, certified and produced, complete with material, by the British Council.