And the bride wore espadrilles

And the bride wore espadrilles

Diane Marraud des Grottes and Nicolas Remaut sit in separate cars in a cavalcade that cuts through the village of Isle St. Georges, not far from the port city of Bordeaux. The stillness is suddenly broken by a round of violent honking, but no one seems to mind. Diane and Nicolas were married a few hours ago with a round of signatures at the city hall and a wedding is the only reason why the French will allow their quiet to be violated.

“French weddings are simple: a city hall registration, a church ceremony—even though the French are not all that religious—and a big post wedding cocktail and dinner party. But you’ll see this wedding is unconventional," says Nicolas’ sister Marie-Aude, my official translator and guide for the day. 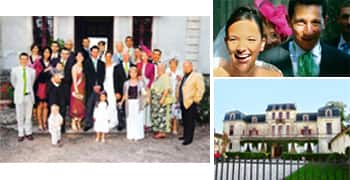 Marriage in heaven: (clockwise from top right) Chateau Turpaut, the dinner party venue; friends and family with the couple; and a joyous Diane and Nicolas. Photographs: Frederic Prugneau, Marcel Grosetti and Marie-Aude Remaut

While the south-east coast of France is associated with resort cities such as Cannes, Nice, Monaco and St Tropez; the south-west coast—stretching from the Atlantic to the Pyrenees, bordering Spain—is relatively less well known. The wedding was Diane’s and Nicolas’ way of inviting their guests to experience the traditions and customs of the Aquitaine and, more specifically, Landes (literally, moors).

In church, Diane looks beautiful in a simple yet sophisticated white silk gown, designed and tailored by her mother. To add a touch of Landes, she wears espadrilles (flat peasant footwear, usually made of jute) as she walks down the aisle. As the couple exits the church after the hour-long ceremony, Nicolas’ friends line up holding up forks and rakes, an unusual guard of honour that escorts the newly-weds to a spruced-up tractor in which they drive to Chateau Turpaut, the venue of their wedding party.

The chateau, located in the middle of an endless stretch of vineyards, belongs to Diane’s family, the Marraud des Grottes. Since the 18th century, the family has been making wine, which sells under the brand name Chateau Turpaut—their reds, as becomes a vineyard in Bordeaux, are particularly prized—and there’s plenty to go around at this wedding. There is of course champagne too, just as well, because Marie-Aude tells me the people of Landes are legendary, even among the French, for their capacity for alcohol.

The hors d’oeuvres, Marie-Aude says, are typical of Landes as well. Apart from the oysters, which came from northern France, Diane’s mother has laid out a traditional spread of pâtés (pork, roebuck, wild boar and, of course, foie gras), meat sausages and rillette (potted pork).

Just as I think I can’t possibly put away another morsel, we are called to the sit-down dinner in the chais (the cellar, usually used to store wine, but cleared today). The entrée, confit de canard (duck leg), is served with the speciality, thick-stalked mushrooms called cèpes, hand-picked in Diane’s family farm. The cheese follows, the pungent fromage de chevre (goat cheese) and Pyrénées, another mountain cheese, served with blueberry jam.

After two heavy courses, the dessert is simple and light. I savour every bite of pastis landais, a rich yeast cake that is a Landes speciality, and caneles, a cylindrical sweet made from flour, vanilla extract and rum, and then baked in copper moulds.

At dinner, every guest is given an unusual souvenir, a pine sapling unique to Landes. The tree is supposed to bring people together and is generally planted by families and friends to mark birthdays and anniversaries. A big dinner party must be thrown when the tree has to be cut. “It’s just another excuse to get together, dine and drink!" jokes Marie-Aude.

By the end of dinner, exhaustion catches up and I fall asleep even as the loudspeakers blare French pop songs. I wake up an hour later and down the dregs of my glass of Turpaut rouge. Turns out, the local adage “Avec du Turpaut on reste frais et dispo"— translated as “With Turpaut, one is always fresh and ready to go"—is true. I suddenly feel re-energized, spring up on my feet and make a dash for the dance floor. Francophile that I have become overnight, I dance all the way till dawn.