The photograph below was taken in the 1950s at Mani Bhavan, where Mahatma Gandhi stayed on his visits to Mumbai between 1917 and 1934. The lady with the tanpura is Kausalya Manjeshwar, one of the seniormost disciples of the great Jaipur–Atrauli diva Mogubai Kurdikar. Accompanying her on the tabla as she sings Gandhiji’s favourite bhajans is her husband Dinkar Manjeshwar, an archivist whose passion for Hindustani classical music is well– known to many music lovers in the city of Mumbai. 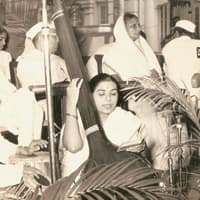 Artistic Cause: Manjeshwar is known for her anti-AIR agitation

On 3 August 2007, as Kausalya Manjeshwar passed away in Mumbai, a life quietly spent in the selfless service of music came to an equally quiet and dignified end. She dedicated her life to first studying and later teaching classical vocal music, but chose to stay away from the public gaze and avoided public performances, singing only on rare occasions for charities and other worthy causes or for broadcasts on All India Radio (AIR).

In our times, when the young and talented seek recognition through instant SMS–driven televised stardom, Kausalya Manjeshwar’s decision to stay away from the limelight may seem unbelievable to many. For others, she remained a source of inspiration—someone whose feet you touched because you really wanted to bow your head in reverence and not because it’s the done thing in classical music circles.

I am proud to say that I am one of the many fortunate students of music whose life she touched with her unflagging love for music. I never learnt a single phrase of music from her in a formal class, as her students did. And yet, there is much that I have learnt from her and from her contribution to music.

Not too long ago, women performers came from a certain class of professional musicians who were admired for their musicianship, but were not considered respectable. If the deep-rooted bias and social stigma against women performers has been replaced by respect and reverence, we have to thank musicians such as Manjeshwar who made it possible for contemporary women performers to study music and take to the concert platform without the mantle of disrespect that often cloaked professional women musicians of the past.

There is more that we have to thank Manjeshwar for. In 1953, she spearheaded an agitation started by artistes against the new audition policy put in place by AIR, whereby almost every musician who wished to broadcast, irrespective of his or her seniority and stature, had to face an audition panel that was often biased and disrespectful. In protest, musicians from the city, and later from all parts of the country, formed an organization called Bharatiya Sangeet Kalakar Mandal with eminent Agra gharana vocalist Vilayet Hussain Khan as president and Manjeshwar as the honorary joint secretary.

Raising a collective voice against the unfair audition policy, the Mandal, with Manjeshwar at its helm, brought the establishment to its knees through a two-year-long agitation that ended in a settlement between the opposing parties in 1955. Taking on the establishment is something most musicians would like to avoid doing, busy as they often are currying favour with the powers that be to get national programmes and other bookings.

Manjeshwar’s involvement in the agitation set an example for others to consider not just their personal career interests, but to join hands in asking for fairness and due respect for performers. An example that we could all be better off following as we bid farewell to her.