Standing in the middle of her messy office on the third level of Ranga Shankara, Bangalore, thespian Arundhati Nag gets ready to clear up some space, promising that my questions will get her undivided attention. “I have a habit of keeping small things because they serve as a reminder of some occasion, or can be used in the future," she says, pointing to a block of teak wood lying on her table. It was a sample that came when the theatre, a prized landmark of the city, was being built around a decade back. 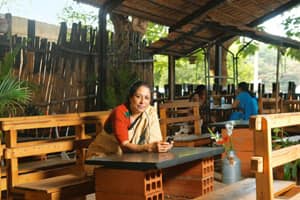 Her office is tucked away in a corner, away from the bustle of rehearsals and ticket counters in Ranga Shankara. But she says she likes to watch who is coming into the theatre, or at least hear the rehearsals from the corridors, and spends little time in the office.

Nag, now 53, is the woman behind one of India’s most vibrant cultural spaces—a space for performing arts, meant for promoting new talent and reviving forgotten ones. Ranga Shankara’s circular stage is modelled on the Prithvi Theatre in Mumbai, founded by Jennifer Kapoor in 1944, and Nag’s passion for the stage and her doggedness have ensured its success.

Built on land reserved for civic amenities in a residential area in south Bangalore, Ranga Shankara, which opened its doors in 2004 in memory of Shankar Nag, her late husband, follows an at least “a play a day" policy, six days a week. It may be by amateurs or professionals, in regional languages or in English. It’s not uncommon to see a Kannada-speaking housewife from Bangalore’s traditional Jayanagar area walk into Ranga Shankara to watch a Kannada play with her friends, or Bangalore’s Bengali residents reunite during a Bengali theatre festival. “Every theatre person wants to create that unique space dedicated to drama; some do it in their gardens, I just went a few steps ahead," Nag says.

Nag was born in Delhi, but her family moved to Mumbai when she was 10. Acting and drama came naturally to her. “My mother used to play the tabla as a child. Her grandmother ruled that a Brahmin girl will not be seen on stage, so at the age of 4, she performed from behind the curtains," she says. At 17, when her acting talents were just about taking shape, she met Shankar Nag, the acclaimed Kannada actor, through theatre. Six years later, the two got married and she moved to Bangalore. “Bangalore had the Kalakshetra, which was open to all kinds of performances. There was no space dedicated to drama, like there was Prithvi or the Shivaji Mandir in Mumbai. Ever since then, building a theatre was a dream that I never shook off," says Nag.

In 1990, Shankar died in an accident. It was so sudden that it took Nag a year to set foot on stage. “A year later, the moment I said my first line, when my sound broke, I knew it was all okay. I knew that the absence of Shankar was not going to destroy me. The last sentence that Shankar and I shared was about theatre and the first act of sanity after his death was theatre," Nag says.

Two years later, Nag, with other members of the theatre community such as Girish Karnad and M.S. Sathyu, created the Sanket Trust. “We used to have weekly meetings of like-minded people, and like all movements, this one also had its share of people drifting in and going out. After several visits to the chief minister’s office, the trust was allotted a plot of land at JP Nagar on a 30-year lease. From then on, I began collecting money from anybody and everybody I was able to convince. I am sure there must have been people who gave me money to stop me from constantly pestering them," she laughs. The contributions ranged from Rs5 from ordinary theatre lovers to big sums from industrialists. “I spent years convincing CEOs about my dream. I must say some of them were really generous." While someone donated glass, someone else offered to cut the glass.

Ten years later, in October 2004, the complex designed by architect Sharukh Mistry was opened to the public.

Performing groups pay the trust Rs2,500 for a show, and tickets are priced mostly at Rs50. “We take a cut of the ticket money only when it’s priced above Rs50, but no ticket here costs more than Rs221," she says, pointing out that the rent of Rs2,500 barely serves to pay the electricity cost for a day. “We almost never break even; this isn’t a business, it’s public service," she says.

Nag’s only dream for Ranga Shankara: “We should be able to influence the direction that Indian theatre takes from here."