Looking down is looking up

An aerial photo is the anti-selfiewe are all just pixels in something grander. And some stories of humanity and our environment can only be told from this distance

Aeroplanes still take my breath way. Flying is the closest, I believe, one can get to magic. It makes me a child again, full of wonder, and pouty if I don’t get the window seat. At each announcement of a flight’s descent, I have forced myself awake, peering out to form my first idea of a new city. Nose on glass, I have waved hello. For what better way is there to be introduced to new lands than a slow aerial glide?

Today, flying is so commonplace that it is almost an annoyance. Drones, unmanned flying vehicles have stripped it of all its enchantment; a job so banal that machines can do it. From reasons ranging from warfare and security to land survey and service delivery, the air is abuzz.

The drone revolution has also brought a new way of seeing—a view that was previously much less accessible. Instagram is teeming with aerial photos taken with drones by professionals and hobbyists: photos of natural landscapes, cityscapes, wildlife, grand monuments, everyday human life, even Delhi weddings. Aerial photography today offers us much more than a bird’s-eye view of our land—it’s telling us our own story, placing us in the context of the landscape, showing us the power we hold over this planet. Through photos of modern mass migrations, fly-over shots of international borders, of abandoned towns and seething cities, it is also telling us how we treat one another.

The first aerial photo that took me a while to comprehend was one taken by American photographer George Steinmetz, of a herd of camels trekking across a desert at sunset. At first glance, the photo looks like a painting of camels; a closer look shows it’s the shadows of the camels, giving the photo depth. Steinmetz, an ace aerial photographer, said in a 2014 interview to the National Geographic, “You are seeing (the land) more obliquely, so you see the 3-D relationship. It’s the perfect mix where I can see the gross pattern—the infinite skyline or the mountains in the distance, but also people and what they are doing." He calls it “street photography from the sky". These photos hone our perception of dimension and space. They give prominence to shadows. Or flatten stark, jagged mountainscapes into gentler, pinched curves. They turn agricultural space into complex, colour mosaics and reduce us to mere specks. 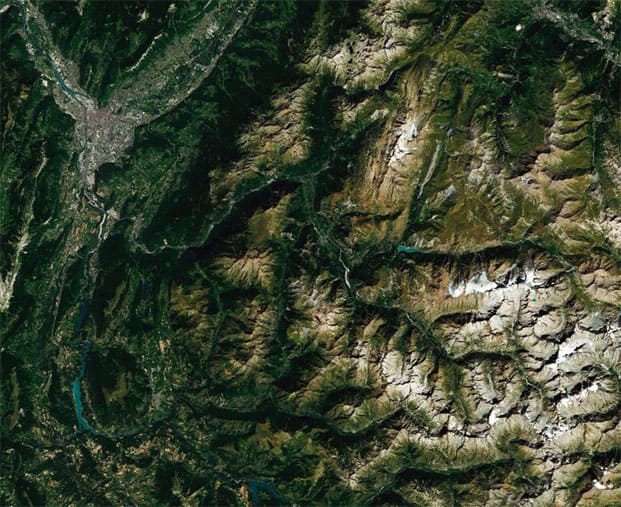 Photographers have tried just about everything to get up in the air, in ways that have been expensive, even absurd. Steinmetz uses what he calls a “flying lawn chair", an improvised motorized paraglider. For years, Alex MacLean, the American architect-photographer, has been using a Cessna plane. Others have used kites, rockets, pigeons, hot-air balloons and now, drones.

Like several other technologies, aerial photography is one that has been freed from the clutches of the military. The method got its first real boost during World War I, when aeroplanes with cameras were used to scan enemy territory. The pressures of war accelerated its development, but even today, aerial photography and war maintain their association through drones. Initially, the aerial photograph was more of a map than a landscape image; it was used to measure distances and make maps faster than ground surveys could. In some ways, aerial photographs are still maps, not a measure of land, but of mankind. 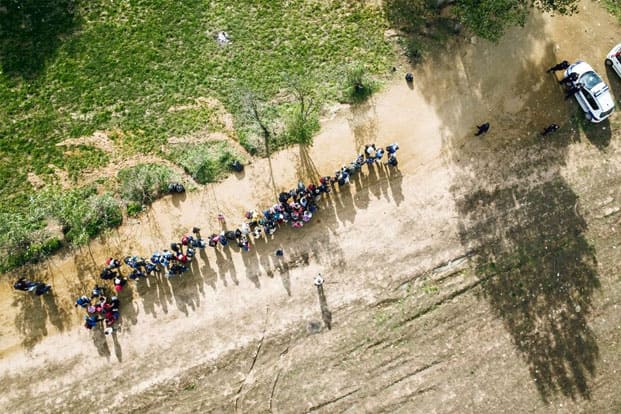 Italian photographer Rocco Rorandelli has used drones to document the European refugee crisis. His photos, taken from a hovering drone, show snaking queues of refugees hiking through the no man’s land between Serbia and Macedonia, refugees lining up at police checkpoints, walking a dusty path littered with the detritus of a herd migration. Rorandelli, in an interview to The New York Times, said, “I’m looking from afar, which is somewhat against classic photojournalism where we are supposed to be close and intimate. This is more like mapping."

What we see from the air are human plans on land, deliberate designs made by planners. These geometries of urban habitation, shown in German photographer Christoph Gielen’s aerial photos of American suburbia and urban sprawl, are mesmerizing in their symmetry and display the sameness of suburban planning everywhere. The photos look abstract, like art pieces, but the sprawl evokes the exponential growth of an organism. Though beautiful when seen from the air, the residential developments look devoid of any identity.

Spatial planning, understandably, has a long association with aerial photography. Jeanne Haffner, a lecturer at Harvard University in the US, has traced the effect aerial photography has had in forming the idea that spatial form and social life are bound together. In a BBC episode, Haffner speaks of Marcel Griaule, a French anthropologist, who, in the 1930s, first drew connections between an aerial photograph of the Dogon tribe area in Mali and the way it symbolized their life.

Le Corbusier, the Swiss-French architect and urban planner, also used the aeroplane to understand human happiness. In the same BBC episode, Haffner goes on to describe how Corbusier, looking at South American vistas from an aeroplane—“meandering lines of rivers and the curvature of the Brazilian coast"—changed his mind about urban design. Previously, he had proposed vanquishing the natural form of a landscape with geometric patterns, but now he wondered what would happen if we built cities in harmony with the shape and natural features of the landscape rather than against it. In his 1935 publication Aircraft, Corbusier writes: “With its eagle-eye the airplane looks at the city. It looks at London, Paris, New York, Barcelona, Buenos Aires, Sao Paulo. Alas, what a sorry account! The airplane reveals this fact: that men have built cities for men, not in order to give them pleasure, to content them, to make them happy, but to make money!"

Distance gives us scale and places us in our environment. In a way, it is the anti-selfie. You are but a pixel in a picture that is so much grander. Over the years, technology has helped us zoom out and beyond our planet, from ground to outer space, from a single human face to the blue planet. These panoptic views can even tell complex contemporary stories of economic inequalities, abandonment of cities, resource use, environmental costs.

MacLean’s work on Detroit, an American city in economic decline, shows the sharp divides between the prosperous parts and areas that he describes as “a moth-eaten blanket". MacLean, a veteran aerial photographer, captures the city’s abandonment and dilapidation in his shots of burnt buildings, collapsed roofs and closed factories. But he also speaks of hope: in a photo, for example, of an acre-large farm that engages the community in sustainable agriculture.

From MacLean to Steinmetz to Gielen, many of the aerial photographs speak of the state of the environment, an argument told well in visual scale, whether it is deforestation or animal migration, mining damage or melting ice sheets, or the swelling human population. If anything, it illustrates our own power, our ability to transform this planet, for they seem to be ciphers for a land begging to be read.