For the great American short story writer Eudora Welty, fiction’s reach and its themes were universal, but at the same time, the power of a story was “all bound up in the local". Her simple explanation for this was that human feelings, which are the source and also the subject of all fiction, are inextricably bound up with place. 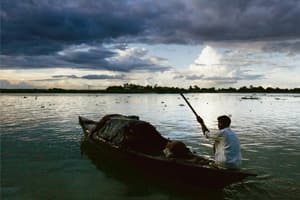 Setting sail: The river is a backdrop for Barua’s stories. Anupam Nath /AP

Like trees, human beings have roots in particular places. Further, they are also marked by place in their thought, speech, imagination, food and dress. Place, as seen through the filter of the human mind, is a kind of extension of the self. To tell the stories of people properly, we must also tell the stories of places.

Indeed, it is the strength of feeling with respect to place that distinguishes the stories of Jahnavi Barua’s debut collection of stories, Next Door. Barua’s stories are set in Assam—a territory under-represented in Indian fiction in English—and they glow with affection (demonstrated by both the narrator and the characters) for the region’s forests and fields, for the surging, life-giving Brahmaputra river that cuts a swathe through the state, and the sun that wheels over the land all day and sinks finally “behind the dark hills of Bhutan". Further—and this is one way of bringing out the peculiar power dynamics in Indian families—many of Barua’s characters either feel trapped by their houses and live in bitterness and resentment, or else love their homes and their gardens intensely, and can be found in their vicinity all day long. 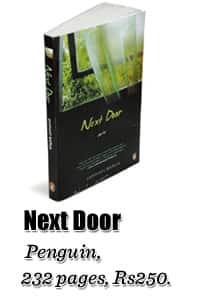 In one of the best of these stories, The Patriot, we are shown a retired government servant, Dhiren Majumdar, and his two houses. One is the old, dilapidated house in which he grew up, and which he cannot knock down. The other is the smaller dwelling alongside, which was all he could afford to build for his family. Every morning, Majumdar sits down in his compound with a cup of tea, and “examine(s) his kingdom as if he were seeing it for the very first time". One evening, Majumdar sees a flicker of movement in his old house and is alarmed. He goes across to investigate and finds a youth lying in the darkness, badly injured. The boy is an insurgent, and he wants Majumdar to get him medicine and food, and to keep his presence a secret. Majumdar has a grown-up son who is a successful civil servant, but somehow there is no feeling between them—indeed, he feels abject before his son, as he used to before his superiors at work.

Now, as Majumdar huffs and puffs under the burden of the arrogant young insurgent’s demands, we feel—although Barua never states this explicitly—that he is being fulfilled as a father for the first time. Barua delicately grafts the bloodshed and violence of the insurgency on to the pathos and neediness of the old man’s life.

Many of the other stories in Next Door also take the relationship between parents and children as their theme. In Sour Green Mangoes, we experience the frustration of a young woman, Madhumita, at the way her ageing parents control every aspect of her life, and here Barua’s writing works beautifully to portray the home as a prison. With time, Madhumita has learnt to harass her parents, yet even this gives her no satisfaction, for she knows it is yet another symptom of her condition. “She will not let them defeat her now," writes Barua, “but what was done was done; she has already become what she is today." This is an observation of great empathy and subtlety.

Not all the stories in Next Door are written to an equal standard. Some strike the reader as ripening buds—to use a metaphor consistent with Barua’s work—rather than flowers in full bloom. At times the plotting seems slightly shaky, and there are points when the dialogue seems to hit the wrong notes. Yet there are many deft touches to be found on these pages, and this is a striking debut that marks its author as someone to watch.