In 2008, when game developer Abhishek Balaria bought an iPhone, the first game he searched for on Apple’s app store was carrom. He’d grown up playing the game and figured that the iPhone’s responsive touch screen would be perfect for a video-game variant of the sport. 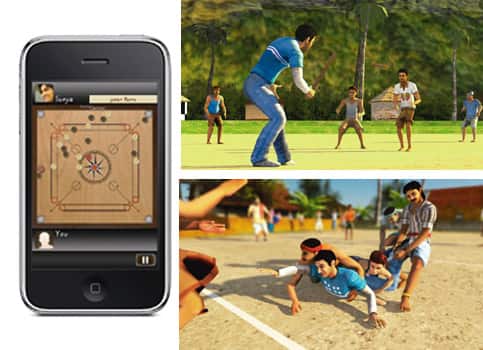 Game on: (clockwise from left) Zentity s.r.o’s Touch Carrom on the iPhone; and screenshots of the gilli danda and kabaddi games in GameShastra’s Desi Adda

He started the project with his firm Zentity s.r.o., based in Prague in the Czech Republic, in the summer of 2009 and sent it to Apple for approval in October. All applications developed for the iPhone are centrally routed through an “approval process" for both content and quality.

“I have had this idea of building Indian traditional games for mobile phones ever since I got my first handset about 11 years ago," says Balaria. “We did extensive research online, studied championship videos and implemented the official rule book. The game sound, friction and mass of the individual carrom-men (gotis or wooden coins) and striker are based on the real equipment." The team even consulted players from a carrom club in Prague.

The result is the first official iPhone game associated with a Bollywood movie— in this case, Striker, starring Siddharth. “We found out about the Striker movie in December 2009. When we discussed the idea of integrating the game with the movie with producers Studio 18, it seemed like a perfect fit. We agreed to the tie-up, integrated the game and got it approved by Apple," says Balaria.

Carrom may seem like an odd choice for a fledgling games studio, but Balaria, conceding a personal preference for the game, insists it made sound business sense too. “Carrom was of the right size and complexity as our first game. It required strong graphics, physics and sound implementations—which we could manage." Since its release, Touch Carrom: Striker Edition has been in the top 100 sports games in 15 countries, including major markets such as the UK, Canada, France and Australia; and in the top 10 in India, Singapore, Kuwait and Saudi Arabia.

“The game was originally targeted at any person of Indian origin who has any exposure to carrom and has an iPhone," Balaria says. “We were, however, surprised to find out that the game was quite popular in Germany and France too. Singapore was a surprise for us as well in terms of volume and popularity."

One of the game’s fans, who wrote to Balaria, was a 73-year-old American who played the game with his 12-year-old grandson on his iPod Touch. “Listening to warm feedback from our users in 30-plus countries worldwide has been a great motivator," he says. The team is now working on a multiplayer version of the game playable over Bluetooth and the Internet.

A number of recent video-game attempts have been made to digitize Indian traditional games. On the Internet, games website www.zapak.com has a multiplayer version of kancha, or marbles.

On 2 November, Sony Computer Entertainment Europe released Desi Adda: Games of India, a video game for Playstation 2 and Playstation Portable consoles that included kabaddi, pachisi, gilli danda and kite-flying. While it got a lukewarm reception, thanks in part to a ponderously clichéd storyline about a non-resident Indian’s (NRI’s) visit to an “Indian village", it was notable as one of the first attempts outside cricket and Bollywood to market a game specifically for Indian gamers.

But where developers such as Zentity are targeting older gamers (18+) who own smartphones, traditional Indian games, argues Alok Kejriwal,co-founder and CEO of online games site www. games2win.com, don’t quite cut it with a teenage audience. “Kho-kho, kabaddi, etc., are ancient in today’s teen/tween mind. They don’t remember what these games are— probably some stuff that they saw randomly on national Doordarshan," he says. Desi Adda developers GameShastra are now at work on an action game based around Indian martial arts such as Kalaripayattu.

Zentity is hard at work too on its next project, adapting another quintessential Indian game. “We will be releasing teen patti, the card game, a few weeks from now," says Balaria. Any resemblance to an upcoming Bollywood film of the same name is just a coincidence.

For more information on Touch Carrom: Striker Edition, including a link to the app itself, go to http://www.touchcarrom.com