Coal dust in my eyes

“As a creative person, your work needs to reflect your politics," says photographer and film-maker Samar Jodha. Twelve black and white portraits of men and women, ranging from the very young to the very old, each blown up to 6 x 5ft, form the centrepiece of his showPhaneng: A Journey Into Personal Engagement. There is also a film and an ambient “soundscape" that replays the night sounds of Phaneng village in upper Assam, home to 150 members of the Tai Phake tribe, which is where Jodha has spent a lot of time in the last four years and where he shot portraits on film with a large format camera. 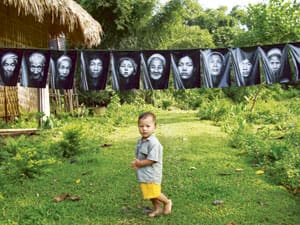 The first show of Jodha’s portraits was held in Phaneng. Samar Singh Jodha

The show is essentially a fund-raising and advocacy project aimed at corporate bodies and individual donors—along with the large prints of the portraits, there are smaller ones on sale, though the price has not been fixed yet. The money raised will supplement his efforts to enable the people of Phaneng to develop self-sustaining sources of livelihood that complement their traditional way of life. This includes an eco-tourism project owned and operated by them, an education programme and restoration work on the local monastery.

Against a pitch-black background, the 12 portraits appear luminous, the light and proximity of the lens capturing the facial topography in detail—the deep rugged lines and scars of the older men and women, the smoother skin of the young, the paper-like tautness of the adolescents and the chubbiness of the lone baby. Jodha made it a point to keep out the clothes, the jewellery and the scenic backdrop—anything that would smack of making his subjects exotic specimens from the farthest corner of India. Barring the headgear made of cloth that they weave themselves and the occasional earring, the faces are unadorned, and we relate to them as individuals—young and old, men and women who could be us.

“It is not about finding a tribe at one end of the country; it is about marginalized communities—they could be from Jharkhand, Kutch or Andhra (Pradesh)," says Jodha. “The laws of the land are so good—Nehru had it right, that they should own their land—but the reality is so far from it." The year-old baby’s questioning look in the last portrait could be our imagination, or it could be the result of Jodha’s deftness and skill as a photographer—regardless, we identify with his apprehension of what the future holds.

Phaneng will be on view at arts.i gallery, Connaught Place, New Delhi, till 7 December.

Shahid Datawala’s photographs of spaces in Mumbai meant for human habitation don’t have any people in them because he says that amid the chaos and hubbub, there is a lot of loneliness in the metropolis.

In his show titled Shadowboxing, he is displaying the photographs—which feature tall buildings, concrete shells of unfinished structures and dilapidated interiors—in pairs to highlight, as he puts it, the disparity of Mumbai’s living spaces. This disparity comes in many forms: “You’ll have flats here going for Rs20-30 crore and a slum a few metres down," says Datawala. “Or, you will have incomplete buildings (only partially built) which have been like this for 25 years in the middle of the most expensive real estate." Some pairs capture this dichotomy very starkly, such as the two stairwells placed alongside—one is spic and span, with smooth surfaces and sharp lines that intersect cleanly at various angles; the other has so much peeling paint and rubble on the floor that its dilapidated state looks almost grotesque. 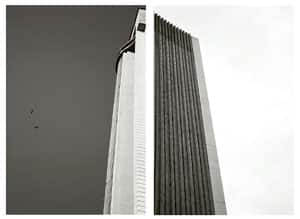 We are prodded to arrive at our own connections, as in the case of the sections of two tall prominent Mumbai buildings which have been juxtaposed so as to merge seamlessly into each other—it takes the contrasting light and dark of the skies in the two photos to remind us that we are seeing two buildings, not one.

While there are many images of decay and ruin—most strikingly, those of half-built, rubble-strewn, brick-and-concrete skeletons of buildings—what rescues the show from being a requiem to Mumbai and its architecture is the variety of newer and not-so-old spaces captured. With the frayed elegance of ornate balustrades and patterned floors, the stained exteriors of apartment walls lined with cast-iron drain pipes and punctuated by the backs of air conditioners, and the curtains covering scaffolding, along with the pathos Datawala captures the poetry of urban architecture.

Instrumental in this is his control over, and play with, light— shots of wreck and rubble in particular, have an ethereal glow. This perhaps bears out his contention that “depressed and sad places", which people don’t care about are “beautiful spaces in their own sense".

Prices start from Rs60,000 per print. Shadowboxing, organized by Tasveer, will be on view at Art Motif, Lado Sarai, New Delhi till 23 November.