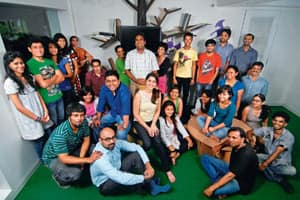 “When you take a project to, for example, an ad agency, the solutions to your problems always come only from advertising," Abraham explains. He thought a far better idea would be the sort of place that could offer someone expertise in all kinds of strategy. “Whether you want, for example, advertising, or PR (public relations), project management or a digital strategy, we would do whatever you need for your idea to fulfil its potential."

After years of letting the idea simmer, he stepped up last year and approached childhood friend D’Souza. “Ryan is always the guy with the solutions," says D’Souza. “No matter what problem you take to him, he’s always had a structure and a working method ready to tackle it for you. When he finally came to me in March, last summer, we were more than happy to begin."

“We really took off with a project for Magic Bus," says Abraham. The not-for-profit company uses football to structure a variety of programmes for underprivileged children. While it had a relatively high profile in the UK, where its founder is from, it wanted to be better known in Mumbai, where it is based.

Early this year, Abraham and his team unveiled a campaign called Kick For Change to solicit participation. “We mapped Mumbai from Virar to Colaba, then took it online for a digital game in which every time someone ‘kicked’ a virtual ball, we moved it up 2m and they donated ₹ 300. We took football freestylers to malls and got someone to come in and make football cupcakes—we even used the church message board at St Andrews, Bandra, to say, ‘Jesus saves—so can you,’" Abraham remembers. Media attention and corporate interest in Magic Bus projects followed accordingly: newspaper articles, radio spots, and tie-ups with sponsors like Aegon Religare.

Vigilante works, essentially, as the cool idea for people with cool ideas. More than a year into operations, the firm has now worked with cafés, magazines, comic book publishers and construction companies. Close-lipped about future projects, they say they are now on track to push through new ideas for a cycle rally, an ionizer wristband, a soon-to-be-launched party store and a zero-fuel, all-green Commute Vehicle, to name a few.

Vigilante functions without a stringent hierarchy: The team has “idea CEOs" for projects, which means that whoever leads with an idea gets to lead the team. But for a start-up, that means a lot of explaining, both internally to new employees, and externally. “You have old clients who’ll come to you and say, ‘We knew you when you were in advertising, but what’s this about?’ And new ones who’ll come to you with a total blank slate," says Abraham.

“Also, when you tell a new client that you do everything, the common idea is that a firm does ‘everything’ because it’s greedy. When actually, we hope we’re all doing it because an idea has potential and we’re here to realize it across streams. People are our toughest challenge."

“I never had a Plan A in the first place," says Ganjawala.

“We cut the middleman out of a lot of areas," Abraham explains. “A lot of people start with a certain vision and find themselves bogged down with the day-to-day challenges of running a company. For them, to find a firm that brings everything about communications or marketing together reminds them of their own spark, and a lot of them are biting."