Book Review: In Other Words by Jhumpa Lahiri

If only this writer, masterful on the condition of exile, were more honestly curious about her emerging Italian self

In Buddhadeva Bose’s Bengali short story The Love Letter, translated into English by Arunava Sinha, a linguist visiting Rome for the first time forgets Bernini and Michelangelo in his anxiety over a love letter from a woman in the US. It is the last letter he may receive before he returns to life in Calcutta, where there is “no room for anything purely personal". But when it arrives, it is coded in a jumble of scripts. For the rest of his life, the linguist is preoccupied with deciphering it.

“Can anyone really live without a task such as this?" he asks himself at one point. “People live easy lives, passing time on some pretext or the other, until they’re called away to their real work. ‘Here’s the letter, your letter, read it to find out what it says.’"

The real work has now called upon another Bengali in Rome. Jhumpa Lahiri’s adopted city features in this book only in occasional glimpses. Even as thousands of Bengali speakers make a living on the streets and sidewalks of the Eternal City, perhaps not far from Lahiri’s home on the Via Giulia, she turns inwards to contemplate her emerging Italian self, cartographer-cautious, one hesitant sentence at a time.

Readers previously uninterested in Lahiri’s explorations of the interior condition of expatriates, exiles and the ineffably unmoored might find nothing to love in her new book, a series of brief essays, and two very short stories, in and about her adopted language, Italian. Some may even find it discomfiting to read, at a time when questions of migration and asylum have become among the world’s most urgent, of a writer moving to Europe in order to abdicate, rather than espouse, a more political existence.

For Lahiri’s literary impulse drives her to a language and interiority totally by volition, with none of the mundane compromises enforced by heritage and circumstance. Giving up English, and more distantly, Bengali, she learns to write in a foreign language she has come to love passionately. “I have to accept the impossibility of reaching the height that inspires me but at the same time pushes me into a corner. Now the height is not the work of a writer more brilliant than I am but, rather, the heart of the language itself." The attempt to be transformed by an alien tongue offers her an “awareness of impossibility", the whole point of life. “If it were possible to bridge the distance between me and Italian, I would stop writing in that language." 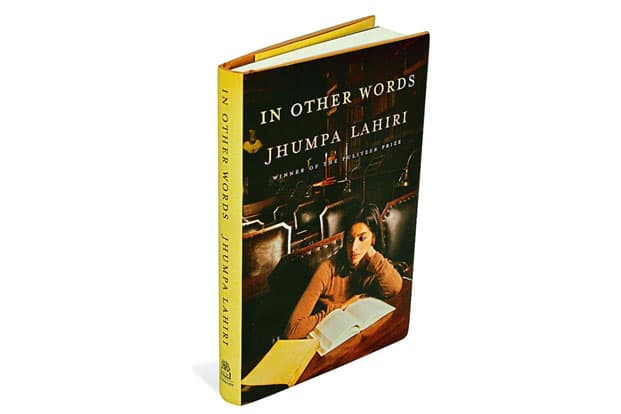 Yet, in spite of no prior admiration for Lahiri, and irritation with her seeming awkwardness in executing the bold, exacting task she has set for herself, I finished In Other Words moved by parts of the exercise, and pleased by the momentum it gathers over 200-odd pages. Lahiri says this book is her attempt at leaving the edges of a deep lake to swim to its centre. By the end, as she compares her situation—with no false modesty—to that of Matisse’s late-stage adoption of gouache découpés, her voice is clear and resonant. The swimmer has plunged underwater; she can hold her breath for sentences at a time.

But I am eager to excuse Lahiri her indulgence. I love Italian too, even if all similarity ends there. Lahiri’s book is not about the language in any sense that might distinguish it from French or Portuguese. In hauling anchor from her Bengali-American existence, she is careful to avoid associating Italian, too, with its wider culture or history. Even the book’s literary moorings—to Alberto Moravia, to Natalia Ginzburg and Cesare Pavese—reveal little, as Lahiri identifies, almost in passing, the writers who lead her into Italian’s dreamworld, where her hearing sharpens only gradually, and her speech slower still.

In earthbound contrast, I came to Italian by the comic accident of footballing loyalty. To me, its first speakers were commentators and players; its first writers were the columnists of La Gazzetta Dello Sport. There’s nothing more dependable than a newspaper if you want to learn the banalities of a language.

Unlike Lahiri, I can’t help but narrativise my fumbling and occasional course of study. I can’t translate “the pen of my aunt is on the table" without being distracted by a daydream of this imaginary aunt. I can’t write “I eat beef" for “Mangio il manzo" without tweeting a screenshot and tagging it #ItalianTraitors. I get upset that my standard-dialect language app won’t accept my saying “Siamo sicuri", or “We are sure", in the accent of my favourite Milanese footballer. The only alchemical fantasy it creates in me is that someday, in a Roman coffee shop, I will order an espresso like a white man with a world cup medal.

To Lahiri, Italian is a yearning. For me, it is an appetite. I don’t offer this as a Falstaffian humblebrag. No doubt it is better that a book be about the impulse to transform than to consume. Lahiri’s longing for Italian is partially satisfied by her deep and sombre meditation on the bare country of the inner self. But perhaps In Other Words would have been a better book if it were less mystical about the sources and complications of this yearning, and more honestly curious about why its writer, a practised draughtsman of the condition of exile, makes these choices.

The struggle with Italian has made her a “tougher, freer" writer, she says towards the end of the book, but this may ring truer in the Italian original than it does in English. Lahiri’s translator, Ann Goldstein, has unearthed for English readers the diamond-hard transparency of the sentences of Elena Ferrante. She has not, it appears, found the same thing in Lahiri’s writing so far. If Italian is indeed Lahiri’s “real work", we had better wait for what follows.

Supriya Nair is an editor at Brown Paper Bag.