Mahendra Mohan Gupta, chairman and managing director (CMD) of the Jagran Prakashan group, is reticent on government affairs and the Lokpal Bill. His political correctness is ironical, given his status as a member of Parliament (MP) sent to the upper house by the Samajwadi Party. But the sprightly Kanpur-based septuagenarian, who heads a formidable newspaper company that prints India’s largest read Hindi daily, Dainik Jagran, offers a reason for restraint.

“I am a newspaper proprietor and my political viewpoint is not the view of the paper that is read by 16.4 million people. I make my point about the government and its performance on the floor of the House. You can quote me from what I say in the House," he suggests. 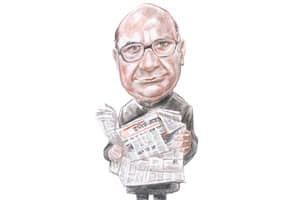 He may be tight-lipped on current affairs but Gupta is surprisingly open about the affairs of his media empire, which straddles print, radio and outdoor. Queries on events in the company, which is listed on the Bombay Stock Exchange, never go unanswered.

Like the one about what prompted the closure of the Delhi and Bangalore editions of Mid Day? “Losses," he replies. “We could not have made money in Delhi for the next 10 years." Mid Day, the Mumbai-based tabloid, was acquired by Jagran from Tariq Ansari of Mid-Day Multimedia in 2010. For any significant impact in the Capital, the paper required ₹ 100 crore, an investment the company didn’t think was justified. The Mid Day brandturns in a ₹ 10 crore profit and the Delhi edition alone was losing ₹ 5 crore a year. It was decided to focus on growing circulation in Mumbai and Pune instead, he adds.

However, Jagran has pumped money into Inquilab, the Urdu paper that came as part of the deal with Mid-Day Multimedia, and launched 10 new editions in the past one year. The company is open to further organic and inorganic growth. When its discussions with a Punjabi paper were inconclusive, the company started Jagran in Punjabi as a greenfield project some months ago.

Page-turner: A commerce graduate, Gupta joined his father’s company in 1954, when the newspaper used to sell 10,000 copies. Jayachandran/Mint

The remaining 88% shares in Jagran Media Network are held by the giant Gupta family comprising six brothers and their children, many of whom are employed in the company. The joint family has stayed together thanks to Gupta’s wisdom in dealing with family as well as company issues after the death of his elder brother, “Narendra bhaisahab", in 2002. Narendra Mohan Gupta was the former chairman of the group and a Bharatiya Janata Party MP with connections at the party’s top level. He was almost single-handedly responsible for policy reforms in print and permission for foreign investment in newspapers.

Gupta seems other-worldly in his belief that the next generation would have imbibed their family values. “Our children are much more professionally qualified and smarter than us. Hopefully, they will stick together." He feels that a family that eats together stays together and ensures that members who live in Kanpur are back home at meal times.

Gupta joined his father’s company in 1954, although the paper began in Jhansi in 1942 to support the freedom struggle. It survived bans by the British regime and thrived after independence, moving to Kanpur in 1947. “Its move to Kanpur was unplanned. From Jhansi we were initially moving our machines to Lucknow. We heard that The National Herald was launching a Hindi newspaper, Navjeevan, from Lucknow. We stopped the trucks in Kanpur and launched from the city," says Gupta.

He is grateful to his father Puran Chandra Gupta, who had the vision to build a large bungalow complex in Kanpur with separate wings for each of his sons. “In most households, the fight begins with the kitchen. If separate kitchens are assigned, they are not even used and everybody flocks to the common kitchen. That is how we live in Kanpur," he says. Even though some members of the family work in other cities, their places back home are secure. He ensures that members of the joint family congregate to celebrate festivals and other occasions at least twice a year. Three weeks ago, for instance, the clan collected at the Jim Corbett National Park to celebrate Gupta’s 50th wedding anniversary.

So far, the Jagran group has avoided the public family disputes that seem to have dogged other family-owned enterprises, such as Kasturi and Sons, publishers of The Hindu, and the Maheshwaris-owned Amar Ujala. Gupta sees no case for conflict as decisions in the company are taken by a professional board. In any case, scope for family feuds was minimized by bringing in foreign investment quite early and listing the company soon after. “If anybody wants to exit, he can offer the shares to the balance family or is free to sell them in the market," he says. One of his sisters-in-law is a features editor at the paper. Yet others are employed in the family’s non-media businesses including education (schools) and an export-oriented manufacturing unit. The sugar mill owned by the family was sold four years ago. “Sugar mill owners are arm-twisted by the state governments because of controls. It was difficult being in the newspaper business and owning a sugar mill," confesses Gupta.

Although Jagran has been an early adopter of new technology and smart marketing, it is often accused of imitating Bennett, Coleman and Co. Ltd, the group promoting the market leader, The Times of India. “The reverse is true. They follow us. We were the first to launch multiple editions of Dainik Jagran. But such remarks do not disturb me. I am still a scholar and not ashamed of adopting something that may be good," says Gupta.

The strides taken by the electronic and digital media in India have not shaken Gupta’s faith in print. Newspapers will survive in spite of the iPad, believes Gupta who is also the managing editor of Dainik Jagran. “TV news has made us relevant. People trust what they read in the morning," he says, not masking his disappointment with news television.

Nearly eight years ago, the company launched Channel 7 in Hindi. Soon, it realized the channel was not only a money guzzler but fed on sensationalism for growth. It did not fit in with Jagran’s genre of muted journalism. The channel found a buyer in Raghav Bahl, the promoter of the Network18 group, and was renamed IBN7. “A serious news channel is not economically viable," says Gupta, adding that even MPs would behave themselves in the House if the proceedings were not telecast live.

As he politely excuses himself for another meeting, I have one last query, about the Audi Q7 parked inside the INS building complex. Is he into snazzy cars? “My son buys these for me. I have an Audi Q5 in Kanpur which I use for long drives. I like driving on the highways. In the city (Kanpur), I am happy to drive in my i10," says Gupta.