Treadmill | You are never too old to run

Treadmill | You are never too old to run

At 75, Ashish Roy, a New Delhi-based retired air force officer, is the best role model for all those still undecided on the advantages of a regular running regimen. “When I started running at the age of 50, my friends told me that I would die soon if I continued," says Dr Roy. Undeterred, he has maintained a strict running schedule for the last 25 years since his retirement from the air force Medical Corp., and is now reaping its benefits. He says: “After two years of running, my weight became normal and now it is 66kg. My height is 5ft 8 inches. My blood sugar, cholesterol and all other tests are within normal limits. My resting heart rate is 44-48 per min and BP is 130/70. My ECG report at Apollo hospital in 2007 showed excellent heart chambers and good heart muscles. Running regularly has delayed my ageing: People say I don’t look a year older than 60. In 1991, I was advised by an eminent urologist to have a prostate operation. I have been able to avoid a surgery till date. I am sure running has improved the condition and even reduced the prostate size."

What’s more, Dr Roy recently completed his 82nd full marathon, and is now busy preparing for the next one—on 21 June in Duluth, Minnesota. He is the only Asian to have run three marathons on three consecutive Sundays in his age group of 65-69—between 25 April and 9 May 1999—and came first in all of them. There is more to Dr Roy. Last year, he became the only person in the world above 75 to run eight marathons in eight months.

Have you started running yet? 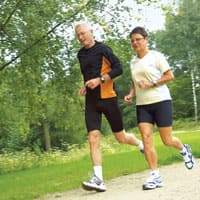 The team, led by Tim Spector, a genetic epidemiologist, found that people who exercised more each week were less susceptible to a range of problems such as heart disease than those who exercised for less than 15 minutes. “It is not just walking around the block. It is really working up a sweat," said Spector. The team adjusted for body weight, smoking, economic status and physical activity at work. The study also found that people who exercised vigorously for up to 3 hours each week were biologically nine years younger than people who did for less than 15 minutes. Now you know why Dr Roy feels much younger than what he actually is!

Why running makes sense when we age

The issues of age: As we grow older, we tend to lose both muscle and bone mass. In addition, increasing cholesterol build-up, BP and sugar levels occupy our minds much more now than when we were younger.

The solution: Moderate to vigorous exercise is a great natural solution for a variety of ailments. Walking is a great activity, but with today’s sedentary lifestyle, it is definitely not enough. That’s where plain simple old running comes in. The motion is repetitive and predictable, and is an activity that our bodies are used to. Since there are no random or sideways motions of the ankles or feet, it is a less injury-prone activity. Running does not require a huge field, nor is it necessary to have a group of people: You can run alone, on the road or even in the small park near your house.

S.K.S. Marya, a leading New Delhi-based orthopaedic surgeon, says: “Running increases the mineral density of the bone and reduces the risk of osteoporosis with age. It has been found that the average bone mineral density in the thigh is 5% higher in runners than their non-running companions, and 8% higher than those who do not exercise at all, making them less susceptible to fracture. Running builds and strengthens muscle tissue, especially in the lower limbs. Increased muscle strength also provides a protective cover to the joints."

So, don’t stop running just because you are getting older. Start running because you want to feel younger. And if you think running is bad for the joints, read previous Treadmill columns. Go ahead and make a difference to yourself, because you are never too old to run.Rahul S. Verghese is a management consultant and founder of Runningandliving.com. Write to us at treadmill@livemint.com