The fun folks at Blaft Publications tell us what’s cooking and our film critic tells us why Shyam Benegal’s latest is not so well done afterall. Download here

It announced that it was organizing a “sponsor-free" gig at the Alliance Française de Bangalore. The band was putting together everything from the sound to the stage, and hoped to recover costs through ticket sales and merchandise. Lead guitarist and vocalist Abhijeet Tambe called it an experiment in “critical mass". “Do we have the critical mass in Bangalore to sustain a band that plays original music?" he wrote in a piece posted online prior to the concert. “The success or failure of Saturday’s show will be an indicator. Now, we shall see how many people are willing to come out and buy a ticket for Rs200 for an evening of good music."

Around 200 people turned up for the concert—and Lounge Piranha managed to break even.

The idea of a self-funded, do-it-yourself (DIY) show came easily to the five-year-old band. “We’ve always had an indie frame of mind," Tambe told us over the phone. “We organized our own tour across the country in 2008 after the release of our (self-funded) album (titled, ironically enough, Going Nowhere), and we just thought now was a good time to test the waters again."

The band’s regular gigs at the local pub, Maya, where it played once a month for a year and a half, saw steadily growing crowds and the band members felt confident of a dedicated fan following. “We’d see about 180 people turn up, so we thought this would work well. We have nothing against sponsors, really, but we understand that sponsors and clubs need to see their cash at the end of the day, and us bands have our own needs and ends," says Tambe.

Organizing the gig was a revealing experience for Tambe as the band debated expenses, considered options and tried to cut costs smartly.

“Cost-cutting" may sound like a strange phrase for a rock band to use, but when the gigs dry up and the phone doesn’t ring, there’s little else to do but prepare for financial drought.

“All bands here go through a period of extreme financial unpredictability. Most don’t survive," says Jishnu Dasgupta, bassist for Bangalore folk-rock band Swarathma. “We’ve all had to cut costs, both in our personal and professional lives." This means transporting delicate equipment on rickety buses and jamming in cramped, claustrophobic rooms with unfriendly neighbours.

The economics of being a full-time independent band in India is uncertain at best and Dasgupta says the idealism of a rock-star life usually gives way, within a year, to the practical difficulties of making ends meet. “It is not fair, I think," he says, “to expect your band to make money to support yourself financially for the first three years at least."

But bands across the country, such as Lounge Piranha, have been trying to swim against this hostile tide, organizing and financing themselves in ingenious ways. It’s a difficult endeavour and a quick vox-pop style survey of bands in two cities presents a grim picture.

“As a band, you earn peanuts, especially if you’re playing niche, original music in English," says 54-year-old Jayashree Singh, who plays for the Kolkata bands Skinny Alley and Pinknoise. Singh has been singing in bands since 1977 and is blunt about the conceit of being a full-time band in India. “You have to have a steady source of income with another job. I think the only new full-time rock stars are very young and still live with their parents."

Sahil Makhija, an almost-full-time rock star who is young and doesn’t live with his parents, agrees. “Always keep your day job," says the frontman of Mumbai metal band Demonic Resurrection. Luckily for Makhija, his day job is closely related to his musical alter ego. He’s a consultant with musical instruments retailer Furtados Music and owns a record company, Demonstealer Records. “Any money you make from your band is just an added bonus."

Metal music is a niche cult in the country and metal bands usually find a cluster of die-hard fans. But even a dedicated fan base hasn’t made the genre a lucrative one. “It was only three years ago that we started getting paid for shows, earlier metal bands had to play gratis," he says. “And our fans…well, the average metalhead is between 15-25 and cannot afford to pay even for entry. These are guys for whom a Rs50 beer is a huge investment." On a good day, Makhija says, a new band can earn Rs8,000-10,000 for a gig, but such days are few and far between. An average gig brings in half that and even those are spread out uncertainly. “If I factor in the cost of upkeep and transport, we’d be running at a pretty miserable loss," he says.

The kind of music a band plays also has a bearing on how well it does. “We’ve managed pretty well, being a full-time band," says Inderpreet Singh of the Delhi band, Faridkot. “My guess is because we sing in Hindi, we’re accessible to a much larger audience." Faridkot came into prominence after being featured on Channel V’s Launchpad, the Indian Idol for rock bands. The band has since been touring consistently, playing up to six shows a month, and is releasing its debut album in a few months. “Shows like Launchpad really helped us—it’s national television, after all. Even if 1% of the people watching that show came out and saw us live, we’d be comfortable," Singh says.

The sprouting of urban clubs has helped the situation somewhat, with more venues opening up for bands. Sponsors are starting to appear. Beer brand Tuborg sponsored a series of metal concerts across the country in 2009, in which Makhija participated. Veteran rockers Zero’s reunion tour was sponsored by accessories brand Fasttrack in December.

There’s also been a shift in the audience, with a growing contingent of music fans demanding, even appreciating, original music over covers. “When you don’t have original music, you have nothing to sell," says Vijay Nair, co-founder of artist management firm Only Much Louder, or OML. “You play covers, then your audience isn’t a fan of you, they’re just Pink Floyd fans."

“It’s when you start making your own music that you, shall we say, emerge on to the scene," says Abhijit Namboodiripad, manager of Kochi-based rock band Motherjane. Motherjane is among the most popular Indian bands on the live circuit, attracting crowds of 700 to 1,000 people to its shows. The band works with an interesting business model. “They’re paid a monthly salary by their artist management firm (a company called Aum-i-Artistes Private Ltd), under the stipulation that they deliver three albums of original material by 2013," says Namboodiripad. This arrangement, he says, helps them focus on the music, leaving the organizational headaches to the firm, which sets up around seven shows a month for the band.

Nair says the emergence of this kind of “industry" around Indian rock bands, of artist managers, sound companies and event management firms, is a healthy sign of growth. “The scene is growing and if you’re good at what you do—you can break through the clutter." There’s a growing sense of indie “spirit", he says, that’s defining the kind of music coming out of it.

Lounge Piranha’s inspiration for the gig came partly from Bangalore’s now defunct “Freedom Jam" concerts. Starting in 1997, the free monthly concerts ran for a decade, buoyed by “sponsorship and philanthrophy". “But the handicap there was the fact that it was free," says Tambe. “As a result, professional bands never took it seriously and it was viewed as a largely amateur festival."

The band approached things differently for its own DIY effort. “We advertised heavily on the Internet. We kicked up a fuss about it—made sure people knew we were taking a risk, and that it was a big deal," Tambe says.

Posters for the show went up in local pubs and across the Internet, and singer-songwriter Gowri and Hyderabad’s Native Tongue were also signed on for the show. “It was really nice of them," says Tambe. “They weren’t paid squat for this—but we agreed to take care of their accommodation and transport."

“I think 200 is the magic number," says Tambe. “We managed to cover most of our costs and pocketed the bit we made from merchandise as well. It was a real dose of confidence."

The band is eager to try more such shows, even hit other cities where it hopes to build a fan base. Tambe is hoping to prove another point—that bands don’t need to settle just for playing in pubs and colleges.

“Bands are used to this culture of piggybacking on pubs and college festivals. But if they set their expectations to just that, it’s their loss," he says. The band is now looking for groups in other cities to organize similar gigs and for the idea of self-funded shows to “catch on and become a movement".

“We’re brought up in an environment of listening to foreign music—it’s the local bands who have to break this mould," he says. Tambe remembers attending an OML-organized “unconference" in November. “One British music producer speaking there said that the vibe and energy in Indian rock right now is very similar to Britain in the late 1960s, around the time the pub bands became international superstars," he says. “Something’s about to happen. The indie music scene is going to explode. We’re just turning the corner."

We charged Rs200 for entry, because 100 bucks for three bands is just super cheap and no one will take you seriously. Around 200 people turned up, which helped us break even pretty much—so I’m guessing 200 is the magic number that bands would want to hit. 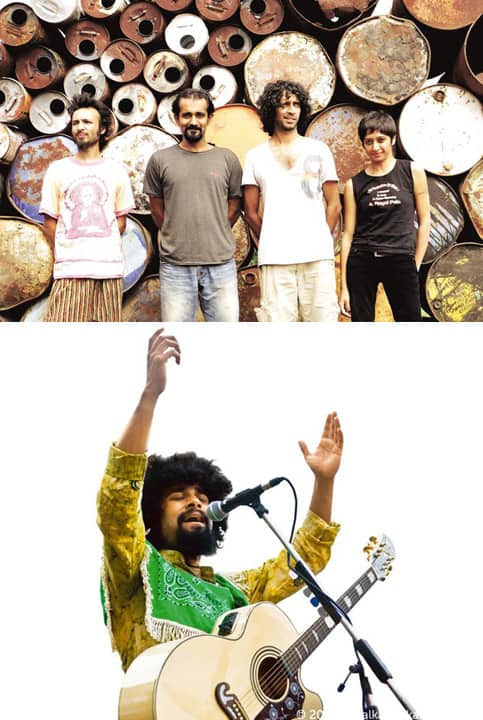 Hiring an auditorium can cost you anything between Rs0 to Rs20,000 (ranging in respectability and capacity from someone’s terrace to a professional stage). Some venues may know you and may be willing to support your cause a bit, and throw in a discount—but watch out for any strings that they might come attached with.

If you’re getting bands from other cities—plonk down about Rs10,000 for that. Cut costs by making them crash at your place and get them on a bus or train instead of a flight. Alternatively, just go for other local bands.

Sell merchandise. It’s a secret source of income that we keep trying to tell other bands about. T-shirts, mugs, albums, posters—when you’ve got an audience of 200 people, it’s a good audience and you can spread your music, and sell your stuff. It’s the sort of place where people will pay attention to this stuff.