When Richard L. Brandt told Eric Schmidt, chief executive of Google Inc., that the title of his forthcoming book on the Google founders was Inside Larry and Sergey’s Brain, Schmidt said: “Good luck. I’ve been trying to do that for some years." The book starts with Schmidt’s quote, setting the pace for this page-turner as the reader tries to figure out what really goes on in the minds of the two most famous, envied and awe-inspiring Silicon Valley entrepreneurs, Larry Page and Sergey Brin, the computer scientists who built Google. 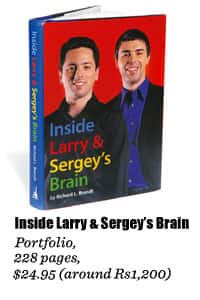 Brandt compares the creation of Google to the task of building the Library of Alexandria in the third century BC. Going beyond the already documented saga, Brandt also analyses the technology and business strategy Page and Brin follow, including the initial hard bargain that they struck with the world’s two most famous venture capital firms, and how they alone have guided the path this company is currently taking. Since most books on Google, including The Google Story by David A. Vise and Mark Malseed, and Google Speaks by Janet Lowe, rely heavily on published stuff (because the company rarely gives access to writers), one begins rather sceptically: What’s new?

In response, Brandt has a little story. As a long-time technology writer at BusinessWeek, he was convinced that Google’s story was the one he wanted to write, having given up an opportunity to write a book on Microsoft. He invested in the company’s initial public offering (bought stocks at $85, around Rs4,300 now, and sold them for $550 before writing this book) and as a stockholder got to attend all the shareholder meetings which, in the initial years, were not open to reporters. He went to Google parties, listened in on every conference call he could and used every excuse to visit the Google campus. Eventually, when he bagged the book contract from Penguin, Google gave him access to anyone he wanted, except Brin and Page.

The duo’s penchant for privacy is legendary. They work with “paranoid secrecy", which often makes Google look evil, very much a contradiction to its stated motto of “Don’t be evil". But when it comes to taking decisions about technology, even the resident tech strategist, Page, decides to throw it open to Google engineers. When the company was deciding which browser to focus on while designing products, Internet Explorer or FireFox, the public debate got too heated for Schmidt’s comfort and he gave the duo a day’s deadline to arrive at an agreement.

“This was a test to see what would happen," Schmidt says in the book. But what happened was unexpected. Brin and Page gave the engineers a new set of assignments and they came up with a totally new approach— the programs would work with any browser.

The book is peppered with several candid quotes. In fact, it’s one of the reasons it scores over some others—devoid of long, third-person narratives, it portrays the two characters through the eyes of those who have or still work closely with Google, folks “dressed in jeans and sweatshirts and moving around millions of dollars".