How Shalini James, a Kochi-based designer, went from regional fashion to the mainstream matrix of 'Indianness'

Last season, the Amazon India Fashion Week’s (AIFW’s) Spring/Summer 2016 edition in Delhi had an unexpected debutant in 41-year-old Shalini James from Kochi. Her riotously colourful collection, titled Indian By Choice, was a “protest", she explains, against the Western imperialism evidenced in the names of colours. Krishna (blue), amla (green), anar (red) and saleti (grey) made cultural sense to her; not marsala, tangerine or pink champagne. Indian By Choice included clothes made from the textiles of one region juxtaposed with those from another—Rajasthan’s Bagru prints with Andhra Pradesh’s Kalamkari or Ikat from Telangana with Mangalgiri, also from Andhra. Well-known beauty and hair expert Ambika Pillai was James’ showstopper.

There were asymmetrical dresses, long and short kurtas, fitted silhouettes paired with wide skirts, pants, palazzos, stoles and saris. The infectious energy at the show went way beyond members of the Malayali community (Pillai too belongs to Kerala) clapping for each other. For Indian By Choice had something more to say than wearable fashion, with regionalism giving the collection a refreshing sensibility. This clearly wasn’t a debutant’s work. 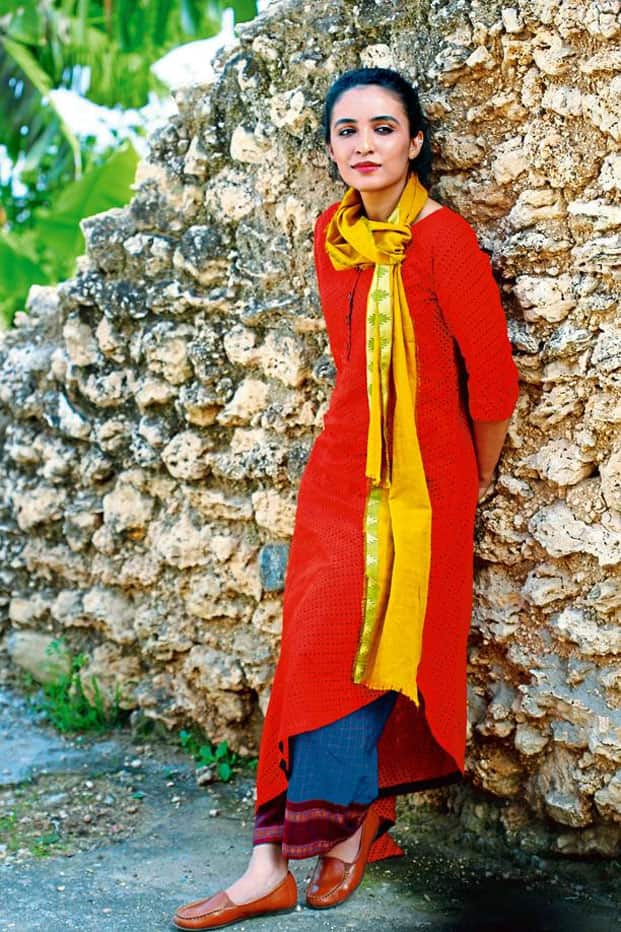 The fashion week in Delhi was a ramp debut for her, but James, who has trained at the National Institute of Fashion Technology (Nift) in Chennai, has been fretting about fabrics and trims for years. “I was always a regional designer. Getting a better commercial foothold is not the only reason to come up close to the fashion hub. I wanted to explore my potential, open my mind," she says.

James’ ethnic wear fits into a section of ready-made fashion for the Indian consumer. The term “ethnic" distinguishes it from some of the avant-garde Western wear created by some designers only for global buyers. Ethnic wear from small established designers has, in fact, hit Indian portals, malls and marketplaces like an avalanche. From brands such as Biba and Jamun Tree to sub labels such as Global Desi by Anita Dongre and Label by Ritu Kumar, it is everywhere. For James to stand out in this large, competitive pool may be far more challenging than taking a well-planned journey from Kochi to Delhi.

As she waits for customer feedback “from the north" (her collection is just out in stores such as Ogaan and Ensemble), it is the right moment to notice the palpable “Indianness" in her design DNA, distinct from mere “ethnic". Indian By Choice, with prices ranging from ₹ 9000-23,000, became a series of sorts thematically, but it is a persuasive argument about the designer’s fashion sensibility.

James has returned for inspiration to south India. With a focus on Chettinad weaves and Chungdi (locally called Sungudi) from Madurai, James’ new collection, Song Of The South, interprets designs created by migrant artisans known as pattu-nool-karar. “For this, tiny tufts of fabric were pinched together and tied with cotton thread. After dyeing, when opened out, the tied parts retained the base colour while the rest absorbed the dye. The resulting design with an inch or so of zari at the edges looked like stars scattered on a midnight sky," says the collection note. Song Of the South garments, available under the Mantra label, are priced at under ₹ 10,000.

It may just be because of designers like James that the tag “Indian Fashion, Made in India" continues to stay colour-fast.